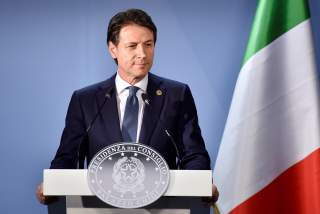 At one point in the not-so-distant past, Italy was known as the “sick man of Europe.” The country’s economy was racking up piles of unsustainable debt due to high public spending; youth unemployment, particularly in Italy’s south, reached astronomically high levels; and Italian politicians were so ineffectual and incompetent that it made the U.S. Congress look like a well-oiled machine. Many Italians looked at the traditional political parties and saw a group of out-of-touch elites who couldn’t even keep their government from collapsing, let alone make their lives more bearable.

That, however, was the Italy of yesterday. The Italy of today, with the populist coalition government enjoying public approval ratings that past governments could only dream of, is bold, confident and increasingly strident. Prime Minister Giuseppe Conte may be a law professor who boasts a calm demeanor on the outside, but the two deputy prime ministers who really run the show are rabble-rousers and proud nationalists who despise being lectured to by other Europeans. Matteo Salvini and Luigi Di Maio, the respective party leaders of the League and the Five Star Movement (5SM), are turning Italy from the “sick man of Europe” to the “troublemaker of Europe”—the black sheep of the European family.

While Di Maio is less of a media darling than the eccentric Salvini, both men are responsible for Italy’s transformation into a populist bulwark in the European Union. They aren’t afraid to hit their European colleagues in the teeth; indeed, for many Italian voters, this is a big part of their appeal. When France’s Emmanuel Macron, the epitome of the European political establishment, criticized Rome for its cynical immigration policy, Di Maio hit back in a very undiplomatic way. “Let them [the French] open their ports and we will transfer a few of the people to France,” the deputy premier said. Otherwise, it would be wise for Paris to shut its mouth and stop being hypocritical.

Ditto Salvini makes Di Maio look like a choir boy in comparison. The interior minister has taken special pleasure in competing with Macron for the future of Europe, partnering with Hungary’s Viktor Orbán in a continent-wide campaign against pro-EU parties in next spring’s elections for control of the European Parliament. No slight goes unpunished; last week, Salvini admonished the EU’s economic affairs commissioner for comparing the current Italian government to a less extreme version of Benito Mussolini’s Fascists. As the Italian firebrand put it, “He should wash his mouth out before insulting Italy.”

The view from Brussels is one of concern and exasperation. In the past, the Italians would put up a fight during EU summits, but at the end of the meetings, they would at least cooperate and sign up to the conclusions on the table. For the League-5SM coalition in Rome, however, cooperation isn’t in its nature. Italy’s populists have no problem using its veto power to block additional sanctions on Moscow, as they did last week when the EU tried to put a Crimean politician on the continent’s blacklist. In late June, Prime Minister Conte held up the summit proceedings until his colleagues agreed to settle on a migration policy that would lessen the burden on Italy’s shoulders. And if the Europeans don’t meet their commitments on the migration issue, Salvini will use his power to forbid any further docking of migrant ships into Italian ports. What human-rights organizations decry as “pure cruelty,” Rome lauds as a necessary measure to force Brussels into action.

The tactic has worked remarkably well, even if it has also been morally dubious. In June, when Italy prohibited the Aquarius from accessing its ports and unloading the over six hundred migrants on board, Spain’s new socialist government agreed to take them in. Europe hailed Spanish prime minister Pedro Sanchez for his humanity and hospitality. Salvini hailed himself, using Madrid’s humanitarian gesture as proof his hardline immigration policy was reasserting Italian sovereignty and territorial integrity. It happened again in August, when Salvini forbid the roughly 170 migrants onboard a rescue ship from disembarking until other European nations agreed to help with the redistribution. Salvini is now under investigation for kidnapping because of it, but the decision nevertheless succeeded in its main aim: establishing a precedent that Italy will no longer serve as Europe’s primary refugee camp.

Despite murmurings from senior Italian advisers that Rome could walk away from the EU completely if the bloc doesn’t reform, the chances of this occurring are low. But for the bureaucrats in Brussels who are already getting pounded as unaccountable interlopers in Italy’s domestic affairs, one has to wonder how long they will have the patience to put up with the Italian gamesmanship.

In the interim, expect the abuse from Conte, Salvini and Di Maio to continue. The trio has discovered almost immediately that attacking the EU is a winning political formula.