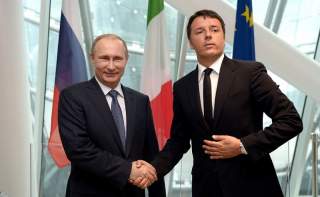 At the latest mid-June St. Petersburg forum, commonly known as the “Russian Davos,” Italy’s Prime Minister Matteo Renzi and a large delegation of senior members of his cabinet were greeted as guests of honor. It was only after showing up in St. Petersburg that Renzi also made a quick stop in New York to campaign for a seat for Italy at the UN Security Council. The move did not pay out. On the contrary, it was the proverbial straw that breaks the camel’s back. With only ninety-five votes at the General Assembly, Italy was “betrayed” by at least twenty-five countries. Italian observers speculate these include Gulf countries, highly critical of Italy’s constantly changing position in Libya, as well as eastern and western European countries who dislike Rome’s flirtation with Moscow. On June 28, following a stalemate at the General Assembly, Italy and the Netherlands decided to split the two-year term at the Security Council. This choice was immediately marketed as a “message of unity between two European countries” by Italy’s Foreign Minister Paolo Gentiloni. As one can tell, that was hardly the original idea.

With his popularity in sharp decline, shaking hands with Vladimir Putin, musing over Moscow’s silovarchs or lobbying for a seat at the UN Security Council were in all likelihood ways for Renzi to remind Italians that he now sees himself above and beyond domestic politics—and that the grand chessboard of foreign affairs, rather than local skirmishing, is now his domain. If that is the case, he should consider the implications of his moves more carefully.

Forget the 2002 Pratica di Mare NATO summit, when Silvio Berlusconi’s Italy managed to broker a landmark rapprochement between NATO and Russia; today’s outlook looks far less quiet. Today, the Mediterranean as a whole is in a state of turmoil. Italy’s neighborhood is once again a pretty dangerous place, though the “bel paese” has been traditionally exposed to shockwaves from the Middle East and North Africa. Klemens von Metternich, the House of Habsburg’s top diplomat, had it right when he complained about Italy’s ruling class and defined it a mere “geographical expression.” Yet, throughout the history of Italy, geography has been both a blessing and a curse. On the one hand, geography has been a blessing, because it allowed the Roman empire to dominate the known Western world for a good portion of Europe’s ancient history, thanks to a combination of sea access—a crucial element for a culture oriented toward commerce—and military strength. On the other hand, Italian geography is also a curse, as Italy is a peninsula in a periodically unstable neighborhood.

Amidst chaos, Prime Minister Renzi has not yet clarified who exactly he sees as his allies. Polls show unequivocally that Italians are very aware of the threats coming from Libya—heightened risks of terror attacks, greater inflows of immigrants and so on. And indeed, for all of Renzi’s confidence, it is hard, if not impossible, to conceal that Libya represents a red-alert item for Rome. This is something that also Russia’s Foreign Minister Sergey Lavrov gently but explicitly underscored in December 2015, when he pledged to “help Italy in Libya.” Italy has never contradicted those who say that Algeria, Tunisia and Morocco cannot possibly remain stable so long as there remains a militia- and ISIS-filled void in Libya, radiating instability across North Africa. At the same time, Rome has never explained whether it is serious about contributing to a regional security architecture in North Africa—and, if so, whether it would seek the cooperation of Saudi Arabia or Iran, Russia . . . or Turkey.

Meanwhile, the USS Dwight D. Eisenhower has just entered the Mediterranean Sea, making it the second U.S. aircraft carrier currently in the area. The Eisenhower, home to a strike group of destroyers, cruisers and warplanes, is scheduled to participate in the air campaign against Islamic State. In its statement, the Navy said having two carrier strike groups in the Mediterranean shows the U.S. commitment to security in the area as well as the United States’ support for its European allies. The carrier’s arrival also comes at a time of increasingly hostile rhetoric over rising tensions between Russia, which U.S. officials say has its own warships and submarines in the Mediterranean.

Moreover, the fact that this silent confrontation is taking place in the midst of a U.S. presidential election campaign signals that the Mediterranean is a set of issues that has top priority regardless of politics; deep state agendas are at play here.

Renzi’s trip to Moscow also happened shortly ahead of the referendum on Brexit. In the post–World War II order, and even more so in the context on the European Union, the UK has often been regarded as the guardian of continental Europe on behalf of the “Anglo-American” bloc. This is precisely the reason why one of the European project’s initiators, France’s Charles de Gaulle, vehemently opposed the UK’s admission to what at the time was still the European Economic Community. De Gaulle was not alone in opposing the UK’s entry, as he was backed by Germany’s Konrad Adenauer. Both leaders feared the UK was still too close to America to cooperate fully with its partners in mainland Europe. With the UK out of the EU—or even remaining in the EU, although in a severely impaired manner—continental Europe’s slide to the east will inevitably begin again. This “neo-Eurasian drift” is particularly pronounced in Italy.

As we write this note, Italy’s dependence on energy imports from Russia is arguably higher than ever before—to a large extent, the very idea of “energy security” has been dismissed by Renzi’s cabinet. Moreover, Chinese investors are hoarding all sorts of Italian assets, some of which are sensitive by definition (energy and gas distribution networks) and others potentially so (particular technologies and intellectual property), while yet more are “soft-power assets” (stakes in Italian media, soccer TV rights and so on).

Interestingly, Rosneft’s Igor Sechin, a senior member of Vladimir Putin’s inner circle, has just gone on the record inviting Italy to behave like Italy’s Enrico Mattei did with the Soviet Union in the 1960s. Mattei, who was the founder of Italy’s state-owned oil giant ENI, famously broke several Cold War taboos, such as doing business with enemies of the West. Mattei’s nonalignment initiatives also helped produce a vast bulk of conspiratorial literature about his death in a mysterious plane accident, which many Italians believe was an act of sabotage by ENI’s competitors and their sovereign sponsors.

In a recent interview with Il Sole 24 Ore, Italy’s leading financial daily, owned by the Italian employers’ guild and traditionally dominated by ENI, Sechin also expresses the wish that Rosneft and ENI can extend their partnership “across the entire technological value chain.”

Finally, Sechin expressed deep satisfaction with the Sino-Russian deal with Pirelli, in which a Chinese investor (ChemChina) and a Russian one (Rosneft) own what used to be one of Italy’s industrial glories. For Sechin, the Pirelli deal showcased the combined might of “European modern technologies in Asia-Pacific markets thanks to Russian resources and Chinese capital.”

The textbooks suggest we are witnessing a rerun of the past two centuries of struggle for Eurasia, this time with China a growing power and Russia a declining one—and let us not forget Iran. The British called it the Great Game. The Russians called it the Tournament of Shadows. Third parties might also include Nepalese Gurkhas and Tibetan monks. Either way, it’s all about anticipating and calibrating how each move will catalyze a reaction by others. It’s not really peek-a-boo.

Francesco Galietti is founder and CEO of Policy Sonar, a Rome-based political risk consultancy, and former senior advisor to the Italian minister of finance.