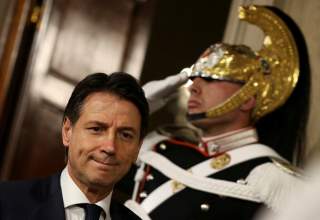 Italian politics marched deeper into uncertainty at the end of May 2018.

Although Italy’s President Sergio Mattarella gave the Five Star Movement-League alliance the green light to form a government under law professor Giuseppe Conte, the head of state balked on the government-in-waiting’s selection of Paolo Savona, a well-known 82-year old Eurosceptic economist, as finance minister. Savona has in the past stated that Italy’s entry into the euro was a “historic mistake.” This situation leaves the European Union’s third largest economy, and one of the world’s largest debtors, in political limbo until the next elections are held. Considering the new rash of political uncertainty in Spain, the challenged nature of economic reforms in France, increasing potential for a trade war between the EU and the United States, and a messy Brexit situation in the United Kingdom—as well as an economic crisis and elections in Turkey—Italy’s problems inject greater angst over Europe’s overall direction. And the Italian political drama will probably get worse before it gets better.

Mattarella is pro-EU ,and had made it very clear to the Five Star and League leadership that he would not tolerate a new government which would move to pull the country out of the Eurozone or disrupt the relationship. Indeed, Mattarella’s decision was made as he believed that Savona’s appointment would put Italy’s ties to the EU at risk , triggering further sell-offs of Italian assets in global markets. Considering that Italy’s debt-to-GDP ratio stands at 132 percent of GDP, and that the government needs ongoing access to financial markets to rollover its debt, further devaluation of Italian assets is not in the country’s national interests.

The problem for many foreign and domestic Italian investors is that the Five Star-League alliance offered up a government that was anti-establishment, anti-euro and anti-immigrant. It also favored public sector debt forgiveness, tax cuts and greater social benefits. Along these lines, both the Five Star Movement and the League believe that it is time to throw off EU (and German) imposed fiscal austerity and let the economy expand. In a country where GDP growth has lagged the rest of Europe for over a decade, and where unemployment remains stubbornly over 10 percent, there is an appeal for government spending to stimulate economic expansion.

The Five Star and League message is that they are willing to take care of Italians first—not foreign investors, banks and the EU. Many Italians equate the EU with fiscal austerity, high unemployment, and complications that arose when it came to rescuing the Italian banking system over the past several years. Additionally, Italy has been hard hit by the migration crisis, and many Italians believe that the EU did little to help. The subject remains a sore point in a country with high unemployment, leaving immigrants, many of them from Africa and the Middle East, as scapegoats for crime and bad economic times According to the Pew Research Center, Italian favorability of the EU has sharply declined in recent years, falling to 57 percent in 2017. This stands in sharp contrast to many other countries where favorability is on the rise, such as in Germany, Netherlands, Spain, France and even the UK.

While the Five Star-League alliance, which garnered more than 50 percent of the vote in the inconclusive March 4 elections, had the prerogative of appointing its cabinet, the Italian president maintains the right to reject cabinet choices or opt for another political arrangement. In this case, he rejected Savona (and by doing so, the Conte government-in-waiting) and turned to Carlo Cottarelli, a former IMF official, to form a caretaker administration.

Whats next? In the short term, the Five Star and League are out, and Cottarelli and a technocrat administration is in. However, the Five Star and League (and their affiliated parties) hold majorities in both houses and are not likely to give Cottarelli a vote of confidence needed to extend his government through year-end (which would give him time to write and seek approval of the next budget). The ousted parties will probably carry a no-confidence measure against the president’s appointee, which will most likely trigger new elections in the fall.

The positive result of this likely political scenario is that Italy’s economy remains in growth mode, state finances are in relatively good shape, and markets are likely to calm, giving the Italian yields a chance to stabilize. Investors see Cottarelli as a steady pair of hands, even though he is likely to be in office for a brief period.

The downside is that Mattarella’s decision defies the public vote and gives credence to populist claims that the country’s political establishment favors central bankers and Brussels over Italian citizens. This situation was not helped by French President Emmanuel Macron’s public support for Mattarella, for what he described as his “courage” and “great spirit of responsibility” carrying out his “essential task, that [protecting] of his country’s institutional and democratic stability.” To Italy’s populists, this is yet another example of the EU establishment interfering in their country’s political life.

President Mattarella’s decision may have provided Italy a breather in financial markets in the short term, but it is likely to make the next elections, probably in the fall, a much more polarized affair. It could also galvanize greater support for the Eurosceptic parties, which see the next election as a de facto referendum on Euro membership. Indeed, League leader Matteo Salvini has already stated that the next election will be a “plebiscite” of the people against the elite. He also stated that, “This is not democracy, this is not respect for the popular vote. This is a backlash by the strong powers that want Italy to be a slave, afraid and precarious.”

While support for the Five Star has remained in the lead at 33 percent of the possible vote, the League has gained and some analysts think it could rise above the 17 percent it reached on March 4, 2018. In the months between the formation of the Cottarelli administration and the next elections, one thing to  watch closely is whether the Five Star and League opt to further develop their alliance and coordinate their campaign efforts to guarantee an overwhelming, anti-establishment majority that would make it almost impossible for Italy’s president to deny them the right to form the next elective government.

Italy faces an uncertain future. In the past, the country managed a considerable turnover in governments and saw its fair share of interim administrations. A saving grace throughout much of this political turnover has been that there was a broad consensus on economic policymaking. This time it is different. What is being offered to the Italian people is a sharp turn of direction—possibly out of the EU or, at the very least, out of the Eurozone. Complicating this is a questioning of the EU’s commitment to democratic government: Italy’s popular vote, when combining the Five Star and League (and its allied parties) formed a majority. To some, Mattarella overturned the popular vote outcome and opted to impose a government more acceptable to Brussels. Another view is that Mattarella believes that pulling Italy out of the EU would be highly disruptive (it would) and that by nixing a populist government he served the Italian public best.

No matter how one chooses to interpret events, Italy’s politics are going to remain a front and center issue for Europe in the months to come. There is a strong chance that the results of the next election will take Europe into a greater crisis, probably of its own making.

Image: Italy's Prime Minister-designate Giuseppe Conte leaves after a meeting with the Italian President Sergio Mattarella at the Quirinal Palace in Rome, Italy, May 27, 2018. REUTERS/Alessandro Bianchi