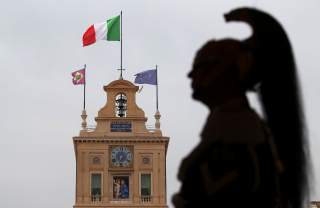 Italy at last has a government, an unlikely coalition of two anti-establishment, Euro-skeptical parties. Its leadership has begun to talk big, vowing to deliver on its campaign promises. Talk has emerged in some circles about impeaching the country’s president and perhaps withdrawing from the Eurozone and even the EU. Anything is possible—especially in Italy—but given the country’s fractured politics and patterns to date, chances are good that this government, or just about any Italian government, will lack the strength to do anything very substantive. Certainly, it will lack the ability to end Italy’s formal relationship with Europe or even reverse past reform legislation.

This strange protection against destructive policy is evident in how matters have proceeded to date. The March election failed to produce any party with sufficient votes to form a government on its own. It took until May for coalition efforts to emerge. The two anti-establishment, anti-immigrant parties, the League party and the Five Star Movement, having gained seats in the election, had started talks. It was a strange combination. To be sure, both ran against Italy’s political establishment and showed a good deal of skepticism about the European Union and the Eurozone, but otherwise they had little in common. The League party, right of center, with most of its support in Italy’s industrial north, ran on a more pro-business ticket of tax cuts and economic reform. The Five Star Movement, which leaned to the left and had most of its support in Italy’s impoverished south, ran a more populist campaign. They savaged each other during the run up to the vote. When they began talks for coalition, their proposals reflected these differences with the League’s cut in taxes to a flat 15 percent rate incongruously joined to the movement’s guaranteed income for all Italians.

If contentious coalition partners were not enough to block action, Italy also had its constitutionally powerful president, Sergio Mattarella. He had to approve all the cabinet choices of the parties trying to form a government. For a while the two parties could not settle on a candidate from prime minister. Eventually, they chose Giuseppe Conte, a law-school professor, neither prominent in general nor in either coalition partner. He managed to win Mattarella’s approval. But when the League party and the Five Star Movement turned to the extremely euro-skeptical Paolo Savona as candidate for economy minister, Mattarella balked, saying that Italy would fulfill its obligations to Europe. They were only able to form a government by choosing a more moderate cabinet.

Early in this process, investors and markets seemed easy about the prospects. Even the incongruous proposal to cut taxes and offer a guaranteed personal income seemed to have little effect. Had it become law, it would have added greatly to Italy’s budget deficits, forcing them well above EU limit of 3 percent of gross domestic product (GDP). Italy’s huge outstanding burden of public debt, already more than 30 percent larger than the country’s GDP, would have grown larger still. The credit rating service, Moody’s, threatened to lower the country’s credit rating from Baa2 to nearly junk levels. Stocks sold off some, and Italian bonds lost ground against Europe’s gold standard, German government bonds. The prices on Italian issues fell so that these bonds had to offer yields more than 2 percentage points above the yields on German bonds. This showed some caution but was still far below the 5.5 percentage points extra yield Italian bonds had to offer during the 2011–2012 financial crisis.

The first failure to form a government, late in May, suddenly brought on a loss of confidence. People feared that a new election would bring even less responsible government than the coalition promised. The slide in stock prices accelerated to bring them down by almost 10 percent from their mid-May levels. Italian bond yields rose to spreads of almost 3 full percentage points over German equivalents. Since investors also suddenly became concerned that Italy’s problems could harm the Eurozone generally, money flowed out of euros and into dollars and U.S. government bonds. By the end of the month, the euro had lost more than 7 percent against the dollar from its early-May level.

That panic and fears about this or any government are misplaced. Because Italy’s politics are so balkanized, so far from consensus, neither this government nor another likely coalition will have the strength to do much. It will certainly take a stronger government than this one or any Italy can manage now to remove the country from the EU or even the Eurozone, as some still fear. Were the League party and Five Star Movement coalition to try, then dissent would likely cause it to fall. Another election is hardly likely to produce anything strong enough for this task either. If this political situation has long blocked the reforms Italy desperately needs, it nonetheless gives markets and Europe protection from what they fear most.

Milton Ezrati is a contributing editor for the National Interest, an affiliate of the Center for the Study of Human Capital at the University of Buffalo (SUNY), and chief economist for Vested, the New York based communications firm. His latest book is Thirty Tomorrows: The Next Three Decades of Globalization, Demographics, and How We Will Live.

Image: A member of the Italian elite military unit Cuirassiers' Regiment, who are honour guards for the Italian president, stands guard inside the Qurinal palace before Carlo Cottarelli meeting with Italy's President Sergio Mattarella at the Quirinal Palace in Rome, Italy, May 29, 2018. REUTERS/Alessandro Bianchi