It’s Official: There Will Be No Iranian ICBM in 2015 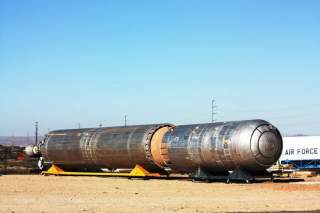 For many years, U.S. intelligence officials have publicly assessed that Iran could possibly flight-test an intercontinental ballistic missile (ICBM) by 2015. Among other consequences, this now outdated projection, and misinterpretations of it, prompted policymakers to schedule the deployment of ever more advanced missile defense systems into Europe, and led Congress to propose building a major strategic interceptor base on the Eastern Seaboard of the United States.

GOP presidential candidates have also made hyperbolic claims based on the 2015 date. For example, Sen. Ted Cruz (R-TX) warned in January that Iran would soon be able to launch nuclear strikes against “New York or Los Angeles.”

But sometime during the past few months, the long-standing official estimate of Iran’s potential intercontinental missile capability was significantly revised.

Adm. William Gortney, chief of Northern Command, answered for the record a question on the issue from a March 19 congressional hearing with this new conclusion: “Iran will not be able to deploy an operational ICBM until later this decade at the earliest.”

The official abandonment of 2015 as the year of an Iranian ICBM should lead U.S. policymakers to reshape certain U.S. missile defense programs and security policies.

The now-outdated 2015 projection emerged publicly for the first time with the release of an unclassified version of a 1999 National Intelligence Estimate (NIE) on foreign missile threats. The estimate concluded that, after North Korea, Iran was the hostile country most capable of testing an ICBM by 2015.

The 1999 NIE described analysts as being divided on the likely timing of Iran’s first test flight of an ICBM that could threaten the United States—from likely before 2010 to less than an even chance by 2015—but implied that most believed it would happen within the estimate’s fifteen-year timeframe.

This projection has been exploited by many members of Congress to try to accelerate costly projects to defend against long-range missiles. Although the 1999 NIE focused on the “first flight-test” development milestone rather than the traditional criterion of “operational capability,” this distinction was often ignored, heightening the apparent imminence of the threat.

In a letter last year to President Obama, 28 Republican senators protested the lack of specific limits on ballistic missiles in the Iran nuclear deal, citing the U.S. intelligence community's belief that “Iran could have intercontinental capability as early as” 2015.

Such statements were already misleading at the time. Independent experts, like Michael Elleman of the International Institute of Strategic Studies and David Wright of the Union of Concerned Scientists, had been arguing for some time that Iran would not be likely to field an ICBM before 2020. But the intelligence community appeared reluctant to rule out an Iranian ICBM flight test before year’s end.

On July 29 of this year, Secretary of Defense Ashton Carter provided evidence in congressional testimony that the government’s Iranian ICBM estimate had been revised. But it was little noticed—perhaps because it came in the form of a warning about the Iranian threat: “I wouldn’t rule out that in 10 years, Iran could progress to an ICBM.”

Adm. Gortney’s written response to the House Armed Services Committee is more precise. It is also more striking, given the four-star flag officer’s prudent, worst-case threat perspective as the military commander charged with aerospace defense of the U.S. homeland. That he is more likely to err on the side of caution was evident when he characterized North Korean KN-08 ICBMs as already “operational,” even though these systems have never been flight-tested. Gortney’s implicit acknowledgement that an Iranian ICBM is years rather than months away is, therefore, especially significant.

In combination with adoption of the Iran nuclear deal’s constraints on Iranian warhead development, this update in threat projections concerning a potential Iranian ICBM should lead to changes in U.S. policy:

The third phase of missile defense deployments to Europe should be suspended. The first two phases involve ship-based and Romania-based systems, designed to counter the short- and medium-range missiles in Iran’s arsenal. The third phase, deploying higher velocity interceptors into Poland, is intended to counter a longer-range ballistic missile threat from Iran. Deploying these systems now would only feed Moscow’s suspicion that the European Phased Adaptive Approach was always intended to counter Russian missiles and has nothing to do with the actual threat from Iran.

The Defense Department should continue to resist congressional efforts to build East Coast facilities for strategic ground-based missile defense interceptors. With no Iranian ICBMs on the horizon, there is even less justification for diverting missile defense resources needed for improving the strategic ground-based interceptors currently deployed on the West Coast. Adm. Gortney says explicitly in his response to Congress that the current threat does not merit East Coast deployments.

Washington should press for negotiations on an intermediate- and long-range flight test ban throughout the Middle East. Following adoption of the Iran nuclear deal, which will block Tehran’s pathways to a nuclear weapon for at least a decade and probably much longer, Iran’s senior military leader stated on November 3 that Iran will observe a self-imposed limit on developing ballistic missiles with ranges over 2,000 kilometers. This alignment of Iran’s declared intent with the U.S. assessment of the technical status of Iran’s missile programs opens up an opportunity to achieve similar commitments on long-range missile testing from other states in the Middle East, such as Saudi Arabia and Israel.

The intelligence community deserves credit for finally updating its estimates of Iran’s ICBM potential, even if the public had to wait too long. It is now up to the policy community to adjust U.S. missile defense plans and work harder with our international partners to exploit the opportunity to pursue a regional diplomatic approach, which limits missile threats from the Middle East while there is a chance to do so.