It's Time to Accept That Assad Is Not Going Anywhere 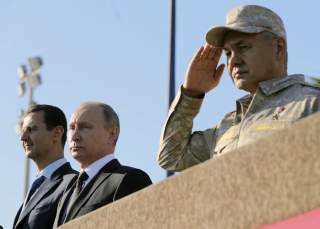 It was always a matter of when, not if, Syria’s rebel factions in the Eastern Ghouta suburbs laid down their arms and surrendered to Bashar al-Assad’s forces. What is commonly depicted in the West as the mainstream Syrian armed opposition has been squeezed of hope, bloodied, worn out, and beaten after seven years of all-out military assault by the Assad, Russia and Iran. While rebel factions are still in control of Idlib province in the northwest, some of Daraa province in the south, and a significant stretch of the Syrian countryside, their goal of forcefully overthrowing the regime in Damascus is no longer a plausible scenario.

The five-week Syrian government campaign in Eastern Ghouta is a metaphor for the how the war has been going for the opposition ever since Moscow decided to deploy its air force in September 2015 to save Assad’s skin. The last week has been an emotionally distressing time for the three main rebel factions (Jaish al-Islam, Faylaq al-Rahman and Ahrar al-Sham) and the 400,000 Syrian civilians in Ghouta who have been surrounded, starved, besieged and bombarded for the last five years. Much like in Homs, Daraya and Eastern Aleppo, Syrian government forces have used time and brutality to their advantage. The regime’s tactical playbook is the same; seal off a rebel district; prevent food, water, medicine and humanitarian relief from entering; block the sick and injured from leaving; pummel all of the civilian infrastructure in the area; and finally, dangle a widespread evacuation offer in return for accepting regime control. The rebels, cut off from supplies and bereft of support from external sponsors who have tired of the conflict, are faced with two alternatives: surrender unconditionally in return for relocating to the north, or die from starvation and bombing. The end result—a regime victory—is the same.

As morally repugnant and ethically incomprehensible as this is to admit, the United States needs to base its Syria policy on the premise of Bashar al-Assad staying in Damascus for years into the future. This is not the scenario Washington wanted, but it’s the scenario the Trump administration will be presented with. Former Secretary of State Rex Tillerson’s outline of a Syria policy earlier this year, which partly consisted of using U.S. military presence as leverage to move a political process in the country forward, has been overtaken by events on the ground. There is no serious, constructive diplomatic process to leverage because it’s not in the Assad regime’s interest to participate in one. For Assad to negotiate political concessions on Syria’s future at a time when his regime is clawing back territory would be the definition of geopolitical insanity.

Where does this leave the United States? Is there any way Washington could work with Bashar al-Assad ever again given the massive war crimes and crimes against humanity he has committed against his people?

Fortunately, Syria’s political dispensation is not a core U.S. national security interest. As hard as this may be for the bipartisan foreign policy consensus to believe, Assad is a minor figure in the Middle East who is now wholly dependent on foreign military support for his survival. While the Assad regime cannot be ignored, neither can it significantly foreclose America’s freedom of movement in the region. U.S. Middle East policy will go on with or without Assad sitting in the presidential palace.

Indeed, as counterintuitive as it may appear, an Assad victory may actually provide the United States with an opportunity to throw Russia down a peg. It is Moscow that is responsible for Assad’s resurgence, and it will be Moscow that will be called upon to backstop its weak client whenever it runs into trouble. Syria’s economy is destroyed, its health sector is in tatters, and its status as an independent sovereign state is compromised—not exactly an optimal ally for the Russians. Damascus will need at least $200 billion to rebuild the homes, hospitals, plants, factories and farms that were razed to the ground. Vladimir Putin, a president lording over a decrepit and oligarchic economy, will be on the hook for much of that money if the United States and Western Europe refuse to assist in Syria’s reconstruction.

Russia helped break Syria in order to keep its ally in power. Now it’s responsible for fixing it. Through seven years of war on his own people, Bashar al-Assad is now on the same wavelength as some of the world’s most despicable dictators. There is no question that his preservation as Syria’s leader is unjust.

But the world in general can often be an unfair and unjust place. Handling the Syria mess off to the Russians—all the while retaining the flexibility to target Syrian-based terror groups when they threaten to attack American interests—may be the Trump administration’s best play.