It's Time to Acknowledge the PKK's Evolution 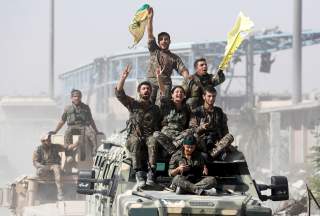 A Marxist past shouldn’t disqualify U.S. partnership with Syrian Kurds

On January 11, 2019, President Donald Trump began the drawdown of U.S. forces from Syria, making good on a promise tweeted shortly before Christmas. Trump’s tweets caused a firestorm within the Pentagon and foreign policy circles. Defense Secretary Jim Mattis resigned after failing to convince Trump to change his mind. The abandonment of Syrian Kurdish groups fighting alongside U.S. Special Forces was, for Mattis, the last straw. National Security Advisor John Bolton has tried to temper abandonment of the Kurds, although it remains unclear to what degree he will be successful.

Many supporters of Trump’s decision argued the United States owes little to the Kurds. There are two major streams of criticism toward the U.S. alliance with the Syrian Kurds. The first is realist and argues that Turkey is more important to U.S. interests. That may have been true historically, but ignores that the only reason the U.S. allied with the Kurds in the first place was because, under Turkish President Recep Tayyip Erdoğan, they proved more willing to confront the Islamic State than Turkey. Other critics of the U.S. alliance with the Syrian Democratic Forces (SDF) say that it is simply cover for the People’s Protection Units (YPG), itself a component of the Kurdistan Workers Party (PKK), a U.S.-designated terrorist group which has led an insurgency inside Turkey since 1984. No amount of intellectual somersaults or diplomatic doublespeak can hide that fact, though the State Department tries. What the YPG have accomplished militarily is impressive, as have been the accomplishments of Kurdish civilian organizations inside Syria.

Should the PKK’s insurgency and past Marxist ideology be a disqualifying factor today? At issue is whether the PKK should be judged by its actions of thirty-five-years-ago, or whether it is possible to accept that organizations and governments evolve.

The PKK was founded in 1978 by Abdullah Öcalan, a young ethnic Kurd in Turkey with a group of like-minded Kurdish Marxists in a Diyarbakir tea house. Over the next years, it moved to consolidate control over the Kurdish cause, often targeting and assassinating members of competing leftist and Kurdish groups and political parties. What had begun as a local terror campaign touched a geopolitical nerve. By the logic that the enemy of my enemy is my friend, Öcalan attracted Syrian president Hafez al-Assad’s support. Syria, which played host to a number of other terrorist and revolutionary organizations. The Syria-supported Democratic Front for the Liberation of Palestine (DFLP) trained the PKK in its Lebanese camps.

On August 15, 1984, the PKK launched coordinated attacks against the Turkish mountain towns of Eruh and Şemdinli, firing on military or police barracks and raiding storage depots. So began an insurgency described as a liberation war by PKK supporters and a terrorist campaign by much of Turkish society. Over subsequent months, the PKK demonstrated its ability to sustain its fight and attack increasingly high profile targets, killing several Turkish soldiers while President Kenan Evren toured the Kurdish region and also murdering a Turkish captain in a town near the Iraqi border. Ultimately, the PKK insurgency would claim more than 30,000 lives, both Kurdish and Turk. Recriminations abound, and both sides committed atrocities. Beyond the PKK’s military record, Öcalan ran the PKK as an authoritarian personality cult. Even after his imprisonment, Öcalan’s personality runs deep and his portraits are omnipresent in Kurdish offices across Syria.

But, two decades after Öcalan’s arrest and imprisonment, should the terrorist, Marxist, and authoritarian origins of the PKK permanently disqualify it from any partnership or the ability to redeem itself? Ironically, Erdoğan did not think so: in 2012, the Turkish leader launched an unprecedented peace initiative, negotiating at first in secret with the PKK, and then quite openly with Öcalan. The talks may have collapsed, but Erdoğan’s implicit recognition of Öcalan as the leader of Turkey’s Kurds cannot be revoked.

Over the decades, Öcalan’s rhetoric has moderated and the PKK goals have changed. No longer does the group talk about Turkey’s partition; rather, its talks about decentralization and “democratic confederalism.” Much of Öcalan’s political philosophy might be gobbledygook, but it is not the Soviet-tinged Marxism feared during the Cold War. And, while an Öcalan personality cult may still remain, it is really little different than the Atatürk cult in Turkey or Barzani cult in Iraqi Kurdistan.

More importantly, PKK tactics have changed: There remains low-level military insurgency, but gone are the days when the PKK targets Turkish civilians (alas, the reverse is not true with regard to Turkish forces and Kurdish civilians, as the residents of Cizre, Nusaybin, and Sur can attest). Certainly, breakaway factions of the PKK such as the Kurdistan Freedom Falcons (TAK) have claimed attacks, but such factionalism is common when former terrorists come in from the cold. That was the case with the “Real IRA” which emerged after the IRA entered into a peace process in Northern Ireland.

To disqualify the SDF from any meaningful partnership and to withdraw support and protection from Kurdish-run cantons in northern Syria because of Öcalan’s Cold War Marxism is to also disqualify any support to Masoud Barzani’s Kurdistan Democratic Party (KDP) in Iraq. After all, Barzani spent much of his boyhood in the Soviet Union where his father Mulla Mustafa Barzani lived under the protection of and received support from the Soviet Union. It would also be necessary to disqualify the KDP’s offshoot group, the Patriotic Union of Kurdistan which from its founding in 1975 to the present day remains a member of the Socialist International. Then, of course, there is Nelson Mandela and the African National Congress. The ANC engaged in terrorism and embraced Marxism although it shed both during Mandela’s tenure. (That radical factions have since re-emerged is not reason yet to isolate South Africa, but rather to pressure Cyril Ramaphosa’s populist and repressive regime). In Germany, the leftist political party Die Linke, a direct descendant of the Party of Democratic Socialism which dominated East Germany during its communist dictatorship, is Germany’s fifth largest party and the largest party in the European United Left–Nordic Green Left (GUE/NGL) group in the European Parliament.

The question over forgiveness and reintegration into international norms is not only limited only to once Marxist parties. The Ennahda Movement in Tunisia has moved from a hardline Islamist to a party tolerant of compromise and democratic norms. Iraq’s Da`wa attacked the U.S. Embassy in Kuwait three decades before it presided over Iraq’s democratic revival.

This is not an open invitation to forgive all terrorist groups: Hamas and Hezbollah remain U.S.-designated terrorist groups and to this day forfeit democratic legitimacy by maintaining their own militias to win through force of arms what they might not otherwise be able to achieve at the ballot box. Not only their activities but also their ideology remains fundamentally undemocratic if genocidal. While Syrian Kurds enable broad and diverse religious practice, Hamas and Hezbollah refuse it. Al Qaeda and the Islamic State are also beyond the pale.

To refuse to acknowledge let alone appreciate the evolution of the PKK and to refuse to recognize the achievements and stability of Syrian Kurdish governance against the backdrop of a horrendous civil war not only does an injustice toward the Kurds, but it also signals that in order to achieve their basic human rights, they must fight to the death in Turkey for otherwise, absent that fait accompli, there can be no political or diplomatic solution in Turkey, in Syria, or elsewhere.