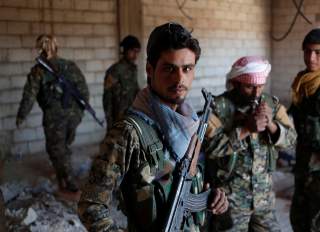 THE ELIMINATION of the Islamic State (ISIS) in Syria has become an unhealthy obsession for Western nations, most of which operate under the assumption that the destruction of ISIS is the only thing standing between peace and eternal crisis. It isn’t. Focusing on ISIS’s defeat is a nonstrategy that has been seen before, one familiar to anyone involved in the invasion and rebuilding of Iraq, where a U.S.-led coalition removed Saddam Hussein without a coherent plan for the day after. Our combined experiences in Iraq as senior military and humanitarian leaders prompt us to call for careful consideration of what comes next—before today’s actions lead us down an even more treacherous path.

Whether it’s the deployment of special forces against ISIS or firing Tomahawk missiles against Bashar al-Assad, regardless of which faction is eliminated or who is removed from their position of power, the likelihood of stabilizing Syria is low. The country has traveled too far down a path that no amount of international goodwill can bring back. “Syria,” as it was previously known, is dead. Investing in an attempt to revive the pre-war status quo of a unitary state is a fool’s errand, which will drain immense resources, drag out the suffering of the people and distract the international community from seeking more achievable goals. The limited capacity of the international community (both resources and will), the conflicting geopolitical interests, and the depth of animosity among people on the ground mean that a strategy premised upon a return to the Syria that once was is bound to fail.

Although success in rebuilding countries after war appears elusive, especially considering the precariousness of Iraq and Afghanistan, research shows that when three goals are achieved—legitimacy of the state, security for the people and the provision of basic needs—success follows. Lacking any of these will lead to a cycle of instability and ongoing conflict. Eliminating ISIS or removing Assad can only be justified if establishing a legitimate, stable and functioning state in the aftermath is possible.

We believe lessons from Iraq and Afghanistan indicate that key challenges can only be overcome if the borders are redrawn, allowing the various nations of people to establish their own autonomous administrations with an agreed pathway, backed by the international community, to independence.

Our argument for the breakup of Syria isn’t a call to revisit the Sykes-Picot Agreement and the subsequent Treaty of Sèvres—in which Western nations mapped out the current Middle East, ignoring what the local people wanted—but rather to recognize that borders are not immutable and are a function of an ever-evolving history, culture and politics. The century-long map of the Middle East, for better or worse, served the region during the interwar period and the subsequent postcolonial transitions, but the internal pressures that had been contained by strongman dictatorships, with the support of various foreign governments, can no longer be held back. Persisting with the status quo in Syria without acknowledging these challenges and realistically considering the likelihood of a sustainable peace will lead to a far worse situation.

Breaking up the current Syrian state is the best way the various Syrian groups calling for self-rule can have their demands met. At the same time, doing so recognizes the changing international political environment, which is no longer willing to accept the degree of foreign support that would be necessary to make the status quo work. To make this case, in the following section we consider the strengths and weaknesses of pursuing the status-quo unitary state, versus our proposal of redrawing borders, against the three criteria for successful state building.

IS IT possible for a legitimate Syrian authority to emerge from the ravages of what is quickly becoming the most devastating conflict of this century? Proponents of the putsch against Assad and those waging the war against the Islamic State should have already answered this question, yet evidence of any such consideration remains elusive. The United Nations has been pushing a three-point plan—an all-inclusive government, a new constitution and a presidential vote. But will such a plan be able to deliver a stable Syria? Military commanders have been tasked by President Trump to develop a plan to deal with the Islamic State, but they haven’t received from their political leadership a clear answer to the question: “to what end?” Without considering these questions, any military intervention serves little purpose if all it achieves is to delay a return to an even more devastating conflict. A peace plan backed solely by the weight of diplomacy is only worth pursuing if it is structured in such a way that it leads to a stable and sustainable outcome.

According to the British social theorist David Beetham, whose work builds upon efforts by others such as Max Weber, legitimacy has three intertwined pillars: a legality of the ascension to power, governance structures needing to be justified by the prevailing norms of society, and consent being given by the populace for the new regime to rule. If the process of a peace plan doesn’t strengthen these pillars of legitimacy, then the peace plan is unlikely to result in a sustainable and stable outcome.

While an externally imposed legitimacy might be achieved by heavy international military pressure on different factions, such an outcome leaves an internal legitimacy deficit that can easily be manipulated by embittered local or foreign groups. It’s an imprecise rule of thumb, but the bigger the legitimacy deficit, the greater the burden upon the international community to enforce security, which in turn requires international consensus and a willingness to contribute blood and treasure to fill the legitimacy void. With renewed Russian assertiveness and a tired, war-weary United States under the leadership of a president fond of fewer foreign forays, the collective international commitment required for success in Syria is beyond the combined capability of any international coalition. Committing to the cause without the resources necessary to succeed will entrench the conflict by creating enemies out of friends, drain the will of the international community to act elsewhere and probably lead to an even worse outcome for the people of Syria.

The alternative approach, being pursued within the confines of a status-quo state, is an attempt to entice a broad coalition of Syria’s warring factions to come together as a replacement for Assad’s government. While possible, this approach will require overcoming the competing justifications that each group has developed to sustain its legitimacy. Syria doesn’t have the luxury of a conflict that is defined by a single dimension, such as class (Cambodia), ethnicity (Rwanda) or ethnoreligious identity (Balkans). The fundamental drivers of the competing factions are so diverse, including historical animosity, economic disenfranchisement, national aspirations, religious fundamentalism and ethnic hostility, that a genuine commitment to discussing a common platform would be impossible. Are the Sunni Arabs of the Islamist movements in Syria expected to sit together with the Alawites whom they have branded enemies of God? Can the Kurds, having for the first time established self-governance, be expected to hand back their hard-earned gains to a regime that will outnumber them ethnically in any coalition in Damascus? Investing diplomatic and military resources in the establishment of fractions of coalitions that cannot foreseeably come together and stay together distracts efforts from alternative, more achievable opportunities.

Conversely, natural constituencies have emerged through the six years of conflict, each with their own narratives that justify their ascent to power. These narratives embed their governance structures within accepted social norms, as well as having already elicited consent from the people in various forms. Legitimacy in the eyes of the people has already been achieved by the Kurds of Rojava, by the rump areas under control by Assad and arguably by some Sunni groups. This legitimacy is a gift to those seeking stability in the region—a gift that needs to be embraced. The international community needs to move away from the pursuit of de jure external legitimacy and acknowledge the de facto internal legitimacy that already exists throughout the country.

THE SECOND aspect of successfully rebuilding countries after war is the provision of security for the people. We begin by considering the prospects for security were the Islamic State to be defeated and Syria remain a unitary state.

The legitimacy deficit noted in the previous section, along with continuing external support to proxies in Syria, guarantees significant levels of internal conflict into the future. Even if the armies of ISIS and other similarly aligned Islamists are defeated, their ideology, leaders and supporters will not simply disappear. Just as the supporters of Saddam Hussein went underground after his armies were destroyed, so too will the emergence of a violent underground Sunni extremist insurgency, sustained by external support, be equally dangerous. Similarly, removing Assad is popularly touted as a long-term solution, but doing so would only see minorities finding an alternative ethnic strongman who, in seeking to ensure his people’s protection, would negotiate to maintain Iranian and/or Russian support.