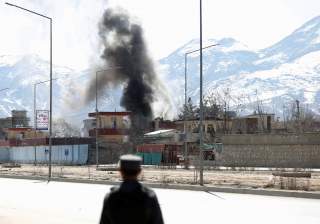 President Trump, in his tweet about Pakistan, called a spade a spade. Since 9/11, Pakistan has consistently played a double game, providing just enough sporadic assistance in capturing members of Al Qaeda and logistical support for our forces to give an impression of helpfulness, while at the same time harboring, training, and assisting violent extremist groups such as the Taliban and the Haqqani network that have killed thousands of American, Coalition, and Afghan soldiers and an even greater number of innocent Afghan civilians.

Islamabad's duplicitous policy has been the single most important factor preventing success in Afghanistan. Ending Pakistani support for terrorists and insurgents is essential if we hope to reduce the terrorist threat in and from the region, contain the pernicious violence and achieve the negotiated settlement of the conflict in Afghanistan that will finally bring relief to the people of that country and allow our troops to come home.

After the Coalition toppled the Taliban in late 2001, there was a key moment—a golden hour when the United States could have achieved the conditions to win the War on Terror in the Afghanistan-Pakistan theater. President Bush declared that countries needed to choose whether they were “with us or against us,” which in the case of Pakistan meant that we required them to support Operation Enduring Freedom, which targeted Islamabad’s Taliban protégés, and cooperate in the hunt for Al Qaeda leaders.

But soon Pakistan concocted a complex strategy of cooperating on logistics and occasional help with hunting Al Qaeda leaders in exchange for massive U.S. aid, while simultaneously building out a clandestine program to reconstitute the Taliban. Yet, when evidence began to emerge that Pakistan was providing sanctuary and active support to the Taliban, the Bush administration did not follow through on its earlier "with us or against us" dictate but instead gave Islamabad what amounted to a pass.

The situation grew worse under President Obama. The administration enhanced U.S. diplomatic engagement and significantly increased the already generous economic and military assistance to Pakistan. The Pakistanis had indicated that, with enhanced military capability and economic inducements, they would move against the Afghan insurgents based on their territory. Then—continuing their earlier pattern—they took the aid but continued with sanctuary and support for the insurgents.

U.S. commanders developed a northern logistical route to reduce dependence on Pakistan for logistical access to landlocked Afghanistan, but the Obama administration did not confront Pakistan about its conduct. At the end of the day, Chairman of Joint Chiefs of Staff Michael Mullen openly stated that the Haqqani Group acted as “a veritable arm of Pakistan’s Inter-Services Intelligence agency,” the ISI, which is the intelligence service that operates support programs to the Afghan insurgent groups. The network not only carries out deadly attacks but also holds Americans and others as hostages in Pakistan.

With welcome clarity, in his speech announcing a new strategy for Central and South Asia, President Trump said that:

Pakistan has also sheltered the same organizations that try every single day to kill our people. We have been paying Pakistan billions and billions of dollars at the same time they are housing the very terrorists that we are fighting. But that will have to change, and that will change immediately. No partnership can survive a country’s harboring of militants and terrorists who target U.S. service members and officials. It is time for Pakistan to demonstrate its commitment to civilization, order, and to peace.

And the administration provided a list of actions that Pakistan should take.

Islamabad has been unresponsive. The Pakistani military leaders probably believe that the United States once again will get distracted by other crises and that U.S. officials will ultimately be sufficiently fooled by the occasional helpful action to let Pakistan continue to get away with its double game. However, his tweet indicates that President Trump seems prepared to break with this pattern. Now, the issue is how to implement that resolve. There will be a role for intensified diplomatic engagement, but to fully get Pakistan's attention the United States should also lead a multilateral effort to dramatically increase the costs to Pakistan, and especially to those parts of its security establishment that run Afghan policy. This should involve several steps:

First, sanction the ISI and individual Pakistanis who are involved in supporting insurgents and terrorists, including bans for them and their family members on travel to the United States and freezing of financial assets. U.S. intelligence agencies have the ability to identify everyone playing a role in Pakistan’s pro-terrorist programs, including senior officials. The United States should also designate key figures as supporters of terrorism. Washington should end Pakistan’s status as a major non-NATO ally, a designation that provides benefits such as preferential access for military technology and sales. We should also suspend all military assistance including military support funds.

Second, undertake unilateral U.S. military strikes on insurgent targets in Pakistani territory. While the United States has targeted Al Qaeda and the Pakistani Taliban with drone and other strikes, it has only on rare occasions attacked insurgents operating against the Coalition and Afghanistan. This has given such groups a free hand.

Third, prepare to designate Pakistan as a state sponsor of terrorism unless it changes course and abandons support for terrorists  Such a designation will impose ongoing restrictions to assistance, bans on defense exports and sales, limitations on exports of dual use items, and other financial restrictions.

Fourth, suspend our economic assistance to Pakistan. This should include not just bilateral assistance but also multilateral assistance through institutions such as the IMF and World Bank, where the United States has major decision-making power. Also, the Treasury should prepare a campaign of escalating financial sanctions, like those imposed on Iran before the nuclear deal, that will curtail Pakistani access to the international financial system. The United States should encourage allies and partners around the world including Saudi Arabia—which has strong ties with Pakistan—to do the same. China has been supporting Pakistan to gain leverage against India and access to the Arabian Sea. We should press Beijing to make its support conditional on Islamabad ending its support for terrorists and extremists.

Fifth, together with the major regional victims of Pakistan’s actions, including Afghanistan and India, we should hold Islamabad accountable before regional and international organizations.

Lastly, it will be important to reach out to the people of Pakistan and document Pakistan’s support for terrorists and extremists that has brought about the change in our approach to their country. We should make it clear that we look forward to cooperation and partnership with Pakistan once its government abandons its policy of support for terror and extremism. As indicated by the January 3, 2018, response of former prime minister Nawaz Sharif to President Trump’s tweet, Pakistani civilian leaders are not united in their support of terrorists and question the wisdom of the military establishment’s policy. Sharif has called for abandoning “self-deception” by the Pakistani military and an end to policies that are leading to Pakistan’s international isolation. Sharif’s statement is important because his family dominates the country’s largest and most important province, Punjab, and his brother is the likely next prime minister of Pakistan. Punjabis dominate Pakistan. Opposition to the military’s policies of support for terrorists have been widespread among non-Punjabis especially the Pashtun and Baluch nationalists. The leaders of the previous civilian government, led by the Pakistan People’s Party, similarly opposed the military’s policy. The Trump administration should consider how to help mobilize civilian opponents of support for terror against the military supporters.

Some will argue that forceful actions like those listed above would be counterproductive, causing Pakistan to cut the supply lines that run across its territory. To this, one could answer that the need to supply Afghanistan is only necessary because Pakistan has kept the conflict at a constant boil. In essence, this has been a racket. While the best and cheapest routes do indeed go through Pakistan, there are acceptable alternatives. Fuel can be sourced in Central Asia. Personnel and munitions are brought in by air. The east-west route going through Georgia, Azerbaijan, Turkmenistan or Kazakhstan, and Uzbekistan or the northern route through Russia and Central Asia can bring in other heavy equipment and materiel. It is notable that President Putin recently acknowledged that the situation in Afghanistan would be worse if the United States withdrew. This might be a matter on which the United States and Russia could cooperate.

If Pakistani support for the insurgents is curtailed, a definitive reduction of Afghanistan's conflict is achievable. With reduced levels of violence, Afghan forces should be able to handle the residual violence, greatly reducing the burden on U.S. and Coalition forces. Such a development in turn can lead the Taliban to realize that time is not on their side and that they should cooperate in a negotiated settlement, the outcome that the United States prefers. To achieve this turnaround, we need to remain firm and consistent in the imposition of coercive measures. And, in the event that Pakistan changes its policy, we should be ready to return to a positive relationship and encourage improved regional relations, including with Afghanistan, that respect legitimate Pakistani concerns.

Patience, positive incentives, and occasional feeble pressure have not induced Pakistan to end its double game. Yet, success against terrorism and extremism in Afghanistan and the region requires a change in Pakistan’s policy of support for such groups. To bring about such a change, the time has come to embrace a strategy that dramatically increases the cost to Pakistan of its current approach.

Zalmay Khalilzad, a former director of policy planning in the Department of Defense, was the U.S. ambassador to Afghanistan, Iraq and the United Nations. He is the author of The Envoy: From Kabul to the White House: My Journey through a Turbulent World. St Martin's Press.