It's Time to Fight for Global Religious Freedom 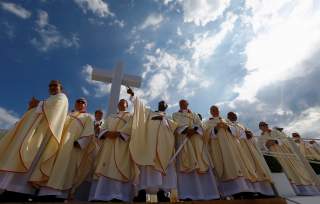 This year, for the very first time, on August 22, we will be celebrating the International Day Commemorating the Victims of Acts of Violence Based on Religion or Belief. It was proclaimed by the UN General Assembly resolution initiated by Poland, supported by Brazil, Canada, Egypt, Iraq, Jordan, Nigeria, Pakistan, and the United States. The day provides an opportunity for the international community to show solidarity with the victims and survivors of religious persecutions and to address the underlying issues of religious intolerance and discrimination. We believe that establishing such a day is just the beginning of a larger action aiming to give voice to victims and survivors and to help find effective response to religious violence and persecutions.

In recent years, we have been witnessing a growing phenomenon of religious violence and persecution. Acts of terror such as attacks on Muslim communities in Christchurch, New Zealand, or targeting Christian communities in Sri Lanka are only recent examples of a serious security threat to religious groups. Different organizations and research institutes such as the Aid to the Church in Need, Pew Research Center, Open Doors or recently Bishop of Truro’s Independent Review have been reporting the appalling situation of religious groups worldwide and providing more examples of persecution and intolerance. We also receive alarming information from journalists, social media and humanitarian organizations operating in affected areas, and above all we listen to the testimonies of survivors. Christians are most affected by hostility or hatred—various reports say—they make up around 80 percent of all people suffering from persecutions because of professed faith (as stated in Bishop of Truro’s Independent Review), including imprisonment, forced conversion, abuse or assault.

For Poland, the promotion of religious freedom and protection of the rights of people belonging to religious minorities remain the cornerstone of its foreign policy. We are committed to expanding and protecting the sphere of religious liberty and to applying in practice the principles of interfaith dialogue, religious tolerance and mutual understanding. A practical example of Polish support to religious minorities in the Middle East, Asia and Africa is the recently increased volume of humanitarian aid and development assistance. It reaches out to those in need irrespective of their creed and beliefs. The projects include providing shelter to civilian population in Lebanon and Jordan, medical support for Syrians, basic health services and emergency response in Iraqi Kurdistan, financing the rehabilitation of children with disabilities in Georgia, and increasing the educational and professional opportunities of women and girls by modernization of vocational schools in Senegal. Polish diplomatic missions closely cooperate with Polish aid organizations.

It is our common obligation—as of individuals, states and the international community—to create an environment where freedom of religion or belief can develop by fostering tolerance and respect for religious and cultural diversity within and among societies. Protection and promotion of the rights of persons belonging to religious minorities constitute one of the prerequisites of peaceful, tolerant and sustainable societies. Religious freedom is not a privilege to be granted or denied by a State, but a fundamental human right. It is a State’s primary responsibility to protect its citizens regardless of race, religion or ethnicity. Bearing this in mind, governments should develop policies to address violations of the right to freedom of religion or belief, provide assistance to victims and survivors and bring perpetrators to justice.

Jacek Czaputowicz is the foreign minister of the Republic of Poland.