It's Time to Return to the Principles of War 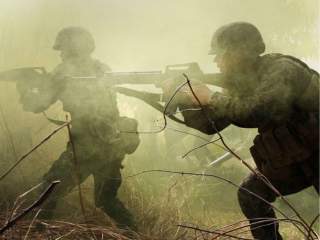 Most modern military doctrine should be scrapped. The Pentagon would be far better served if our military thinkers got back to the basics and taught the principles of war—and little more.

Conflict just keeps getting more complicated. In the modern era, the general response has been to develop new concepts for the how the armed forces ought to conduct themselves. “Bold reimaginings” have sprung forth as quickly as weeds. Getting the “strategic narrative” right is but the latest doctrinal flavor of the month.

But while explanations of how we should fight keep getting more cerebral, sophisticated and sensitive to the conditions surrounding contemporary conflicts, the fighting hasn’t gotten any easier. Occam’s razor suggests that maybe all that fresh thinking isn’t helping win wars.

Why do smart, elegant doctrines come up short? The easiest explanation would simply dismiss modern military theorists as feckless pseudo-intellectuals. Colin Gray has compared the defense community to the fashion industry. “Expert defense professionals quite literally follow the fashion in ideas. . . The bigger the idea, the greater its conceptual reach and hence its organizing potency, and hence the more compelling the felt need to jump aboard the intellectual bandwagon.” There may be some truth there, but more is going on.

Defense thinkers are not fashion designers. Their debates are about changing outcomes, not aesthetics.

Sure, Pentagon brass may be quick to embrace the latest terms of art. But new terms don’t enter the lexicon unless there’s an original idea that gets people talking. And, make no mistake, thinking anew is important. Attacking orthodoxy, convention and unquestioned assumptions in pursuit of a competitive edge—that’s a good thing.

What’s wrongheaded, though, is the premise of the modern defense debate. The presumption seems to be that, just as farmers must plow the fields and rotate crops every year to get better results, so military thinkers must turn over fundamental military concepts on a regular basis. The belief that intellectual advances will inevitably deliver a better understanding of complex phenomenon is a tenet of faith—and one of the biggest blind spots—in the modern world.

As the Western world moved from the Renaissance to the Enlightenment, the Western mind embraced the notion that it had embarked on a sure, steady march of human progress—one that would ultimately lead to a perfect understanding of the physical world. This transformation was most profoundly seen in the scientific revolution.

In search of absolute dominion, other fields of human enterprise, including military affairs, began to don the trappings of scientific thinking. We see it quite plainly in Clausewitz’s magisterial On War. That nineteenth-century treatise is suffused with jargon that appealed to the Enlightenment crowd.

The tradition continues to this day. Western military writers commonly embrace scientific jargon, symbolic of the faith that there is always a better way to think about the natural world. But shoehorning thinking about war into a scientific-sounding narrative is insufficient.

In an essay on rethinking military concepts, James Dubik invokes an Enlightenment-sounding answer about progress in military affairs. “A brief look at scientific revolutions,” he writes, “provides a glimpse of how fundamental is the continuing transformation in the profession of arms.” Yet the comparison is nonsensical. Dubik is trying to comprehend the changing conditions of contemporary conflict. Physical science is trying to gain a greater understanding of an unchanging physical reality.

Even science has a hard time discovering truth, and war is not a science experiment. There is no preordained path to military enlightenment.

More military thinking doesn’t lead inevitably to better thinking. Indeed, lately it seems to have put more trees in front of the forest.

When General Mattis took over Joint Forces Command in 2007, he spearheaded an effort to fight back against overthinking war. At the time, “effects-based operations” served as favored term of art. Mattis pushed back. “We must return clarity to our processes and operational concepts,” he wrote. Military doctrine had created “unrealistic expectations of predictability and a counterproductive information appetite. . . requir[ing] unattainable levels of knowledge about the enemy exercising its independent will.”

Mattis argued that a far better approach would be to “re-baseline our terminology and concepts by returning to time-honored principles.” He was right. Military minds need to get back to first principles.

What if military thinking stripped itself of the modern era’s futile effort to mimic the Enlightenment goal of gaining perfect knowledge and mastery over the affairs of men? What would be left?

They are called the principles of war. Specifically, they are: objective, offensive, mass, economy of force, maneuver, unity of command, security, surprise and simplicity.

The origins of these principles are best explained in The Quest for Victory by military historian John Alger. He writes that “[a]n examination of some of the more important writings on war—by Sun Tzu, Vegetius, Machiavelli, the duke of Rohan, Jean Charles de Folard. . . the marquis de Silva and Henry Lloyd—conveys both the form and concept of martial principles before Napoleon.” The common thread among this diverse cohort of thinkers is that they all predate the intellectual conceits of the Enlightenment.

The principles of war survived into modernity. While military theory got more complex, convoluted, and complicated from the age of Napoleon on forward, “old-fashioned” maxims managed to hang in there. Even Clausewitz, before he got bogged down in On War, paid them heed in his essay, “The Most Important Principles on the Conduct of War to Complement My Instruction to His Royal Highness the Crown Prince.”

Ironically, the broad acceptance of principles as a valid guide to the study of war was fostered by the military’s growing obsession with the certainty of science as the basis for truth. The preface to Folard’s History of Polybius affirmed: “Science has made progress only through the knowledge of its true principles. War is no different. The knowledge of its principles becomes the foundation on which its study is made.”

Over the course of the nineteenth century, the principles of war were codified and refurbished. They stuck around, though they were pushed further and further into the background as militaries developed more elegant ways of thinking and planning.

By the end of the Cold War, the principles were under all-out assault. They were included in Joint Doctrine—although the Joint Staff tinkered with them by adding three new principles: restraint, perseverance and legitimacy.

As Antulio Echevarria observes, the additional axioms weren’t really “general rules requiring judgment in application.” In other words, they weren’t principles at all. Rather, the additions were “little more than common-sense advice” added to address post–Cold War concerns for sustaining political will in modern conflict. Essentially, the military was playing politics with the fundamental concepts of war. The change illustrates how the principles had drifted from their original purpose; they were ceasing to serve as a critical conceptual framework to think about conflict.

The JCS principles marked the beginning of the end. Military thinkers looked for more relevant, modern conceptual tools. In 1989, Robert Leonhard penned a new set of principles: The Principles of War for the Information Age. Appearing in print right around the time of the collapse of the Berlin Wall, the book garnered a lot of attention from military minds thirsting for new thinking. “Under Leonhard’s system,” Echevarria writes, “military leaders would not have to memorize ‘eternal truths’ for later application; instead, they would learn to weigh the pros and cons of opposing concerns. . . ” Still, Leonhard tried to remain true to the traditional notion of providing a simple model to guide strategists’ understanding of the factors that must be considered in military decisionmaking.

Under the stress of ambivalent operations in the Balkans and then intractable conflicts in Iraq and Afghanistan, the effort to sustain the “simple” completely collapsed. In the modern military mind, modern war became too hard for old ideas.

New thinking, however, has not made war any easier.

It is time to reverse course. Let’s stop clinging to the notion that the new generation of thinkers is, axiomatically, smarter than those who preceded them.

At its heart, armed conflict remains a dynamic competition between adversaries; each conflict is tinged by the unique circumstances under which it is fought. Why waste time trying to develop complex intellectual tools that, in the end, deliver no better insights than simple, timeless constructs?

There is a case to be made for going simple. For that, the principles might serve well enough.