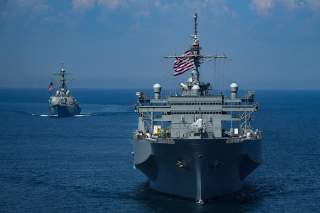 There was a time, when President Barack Obama was still in the White House, when the U.S.-led coalition in the Asia-Pacific could have responded to, and perhaps countered, the creeping occupation and militarization of the South China Sea. According to many security experts, the window for such action has now closed, and Beijing has successfully created irreversible facts on the ground. If that is indeed the case, then freedom of navigation operations (FONOPS) and other measures are too little, too late. China has engineered a new status quo in the South China Sea, and efforts to counter its larger ambitions should henceforth focus elsewhere.

What is perhaps most surprising about what has occurred in the South China Sea in the past decade isn’t so much that China has succeeded in building a series of artificial islands and militarizing what it regards as its “lake,” but rather that the international community would be caught unawares by the current state of affairs. From the outset, Beijing telegraphed its intentions in the South China Sea, and if it has become a no-go zone for others in the region, and for the United States, it is largely the result of our inattention and our failure to read the tea leaves.

Democratic states in the region, along with their longstanding security guarantor back in Washington, now face a new dilemma. And this time it should be clear to all that inaction or inattention will only mean more trouble down the line. Aware that China’s activities in the South China Sea are directly related to its larger ambitions in the West Pacific and Indo-Pacific (among them displacing the United States), it is now incumbent upon allied states in the region to give serious thought to whether even more Chinese expansionism is something they can live with.

The first area where this question needs to be asked is in the East China Sea, where China has also increased its military and maritime militia activities—primarily near the disputed Diaoyu/Senkaku islets claimed by Tokyo, Beijing and Taipei. There, as in the South China Sea, Beijing’s strategy has been one of “salami slicing”—small, gradual gains that, over time, fundamentally shift the balance in Beijing’s favor. As I argued in an earlier piece for the National Interest, Beijing has created an environment of “permanent conflict” in the East and South China Sea whereby it alternating escalation between the two areas, shifting out when its actions drew too much attention, only to return months later to build upon previous gains.

For various reasons, the might of the Japanese self-defense forces and Tokyo’s security treaty with the United States chief among them, China’s gains in the East China Sea have been more limited than in the South China Sea. Still, the frequency of intrusions by Coast Guard and fishing vessels into Japanese territorial waters or near the disputed Senkaku/Diaoyu islets, and of transits by the People’s Liberation Army Navy (PLAN) and PLA Air Force (PLAAF) through the Strait of Miyako, between Taiwan and Japan, into the West Pacific, has reached alarming levels in recent years.

If, as I would argue, there is no going back in the South China Sea and we must resign ourselves to ceding that maritime territory to China, then the next step is to decide what to do next. More inaction would likely embolden Beijing to seek to accomplish in the East China Sea what it has already achieved in the South China Sea. Another option, if the fledgling democratic alliance is ready to take concrete countervailing action against China, would be to turn the entire East China Sea into a “choke point” for China: denied area whereby the PLAN and PLAAF would no longer be able to use the nine existing channels it currently uses to transit from within the first island chain into the West Pacific. Between them, Japan, the United States and Taiwan undoubtedly have the means to close off this area to the Chinese military by fielding various naval, ground-based and airborne defense systems as well as by reinforcing Yonaguni Island, which lies just 108 kilometers (67 miles) from the east coast of Taiwan. (I would also argue that every effort should be made to ensure that Palau, a tiny speck in the Pacific but strategically located, retains its official diplomatic ties with Taiwan.)

Without doubt, such a move would be escalatory. Nevertheless, the case could be made that China has already flouted international law by refusing to recognize the legitimacy of the July 2016 Permanent Court of Arbitration ruling against it, not to mention the unprecedented occupation and militarization of an expanse of international waters. Such actions could legitimize a counteractive move by an Asian alliance which would in effect punish Beijing for its failure to behave as a responsible stakeholder. The objective of such enforcement action, which no doubt would necessitate coordination between Japan, Taiwan and the United States., and possibly with other allies, would be to deny China the East China Sea as a transit corridor into the West Pacific and limit it to the Bashi Channel between Taiwan and the Philippines. In other words, it would yield to China’s gains, but prevent further ones, especially as gains in the East China Sea would pose a direct threat to Japanese trade routes, the U.S. military presence in the Pacific and expose the continental United States to missile attack by Chinese submarines.

With its many successes in the South China Sea, Beijing has effectively created a “choke point” for its competitors; in the complex game of go that has emerged in the Indo-Pacific, the democratic alliance’s next move should be to create a “choke point” of its own. Otherwise, there is no reason why China, having consolidated its successes in the South China Sea, should not try to repeat this feat further north.

Moreover, for Japan, such a strategy would imply strengthening its security relationship with Taiwan while adding urgency to the maintenance of the “status quo” in the Taiwan Strait. The continued existence of Taiwan as a sovereign entity is a key component of this strategy; annexation by China would neutralize what is arguably the single most important barrier to Beijing’s goals in the West and Indo-Pacific.

Without concrete action, rhetoric about “pivots” and “rebalancing” will remain empty slogans. There are risks in escalation, but at the same time continued inaction, or even more of the ad hoc same, is a recipe for the creation of a future that very well could be untenable to the alliance a few years hence.

The urgency of taking countervailing action has also become more evident following the recent announcement by Beijing in early July that control of China’s Coast Guard has been shifted from civilian command to direct control by the Central Military Commission (CMC), which is supervised by President Xi Jinping. Most experts are of the opinion that this move occurred by design rather than as the result of concessions to hawkish elements by an embattled Xi. Whatever the reason, we can now expect the Coast Guard to act as proxy to the PLAN, a fact that creates a variety of uncertainties as to rules of engagement and which undoubtedly is intended to test the alliance’s resolve. Here again, absence of an appropriate response to this “salami slicing” strategy would create new facts at sea and could, furthermore, prove destabilizing to the entire legal system should other countries decide to emulate Beijing and militarize their own civilian maritime agencies. If indeed putting the Coast Guard under CMC command was by design, then we can expect the Coast Guard to become more assertive in “defending” China’s territorial claims in both the East and South China Sea, often with Coast Guard vessels that are better equipped and have a larger displacement than their competitors.

The impact of China’s growing ambitions within and beyond the first island chain, and by default over the East and South China Seas, affect not only the ability of the U.S. military to retain its role in the Asia Pacific, but increasingly undermine Taiwan’s—and Japan’s—sense of security. At some point, the alliance of democracies will need to make a choice between greater accommodation of Chinese expansionism and strategic retaliation. Having already “lost” the South China Sea, it is incumbent upon the alliance to enter the game and to demonstrate that it, too, means business. To do so, it will have to be willing to escalate, well beyond the occasional FONOPS and annual U.S. Navy transits in the Taiwan Strait. The East China Sea is undoubtedly the place to start, given that it is of immediate concern to all three key partners in Northeast Asia—Japan, Taiwan and the United States—and that it constitutes the last remaining “choke point” within the first island chain. Until China can demonstrate its willingness to abide by international law and to respect the territorial integrity of other regional powers, the East China Sea corridor should be denied it as a transit point into the West Pacific.