It's Time for the West's Nuclear Renaissance 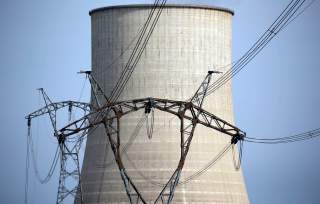 Despite political instability in many parts of the world, the global economy is ending 2017 in good shape, and cheap energy is the foundation of it. Asia continues to set the pace; U.S. growth is encouraging, and the Eurozone is stronger than it has been for a decade. Investors aren't yet spooked by the prospect of higher interest rates, and equity markets remain buoyant.

Yet, the prerequisite for all this economic success is a reliable risk-free supply of competitively priced energy. In past few years, the benign combination of the shale gas revolution, a faster and bigger than expected fall in the cost of renewables, and oil prices below half the levels of a few years ago, has delivered huge economic benefits.

But abundant, secure and cheap energy can't be taken for granted. In the last eighteen months four developments, which taken together are capable of overturning the status quo, have emerged. If the West ignores them, it risks missing out on the economic and security benefits of the next energy revolution.

The first is the growing political consensus about climate change. Action to cut carbon emissions is accelerating. New coal projects are hard to finance because investors are scared of being left with stranded assets.

The second is Donald Trump's repudiation of the Paris Accord. Mr. Trump has handed leadership of the world's response to climate change to China where it is eagerly seized by President Xi Jinping.

The third is the faster than expected expansion of renewable energy. The addition last year of 161 gigawatts of renewable energy capacity worldwide—four times more than ten years earlier—is unreservedly welcome, but it doesn't mean that renewables can be relied on to meet the entire energy needs of the world, however much their starry-eyed advocates wish they could.

Without the availability of flexible, large scale, low cost and long-term electricity storage, renewables can't guarantee security of energy supply without massive and expensive back up capacity.

The fourth is the growing geographical divergence of attitudes towards nuclear power. The old economies of Western Europe and the United States, apart from the United Kingdom, are shunning investment in new nuclear capacity. By contrast new high growth countries, the BRICS and beyond, in Asia, the Middle East and elsewhere, together with east and central Europe, are planning ambitious nuclear new build programs.

The relative decline of nuclear in the West is the result of a misperception of costs, and the militancy of activists, who ignore nuclear energy’s vital contribution to decarbonising electricity.

This interaction of these four factors poses untenable risks. Many actors, including China, will back up the growth in renewables with increased nuclear capacity.

By 2030 concern about climate change will have intensified enormously. China, whose emissions will then be falling rapidly, may propose, with strong backing from the EU, the immediate imposition of a substantial international carbon price, designed to speed the demise of fossil fuels.

Countries, which have successfully prepared to be fossil fuel free by the end of the 2030s, will flock to support this proposal. Others, who rely on gas, will be waking up to a nasty shock.

By then nuclear will be a big part of the energy mix in much of Asia, the Middle East and Africa. Indeed, since the International Energy Agency estimates that twenty gigawatts of nuclear capacity must be connected to the grid each year to meet agreed climate targets, it needs to be.

The price of nuclear could be lower too if common sense international cooperation on safety standards grows and economies of scale kick in. Russia's Rosatom, which is now building more of the latest generation reactors than all other vendors combined, provides a good example for how the economies of scale reinforce the competitiveness of nuclear. The Russians are also likely to be the first to commercialise fast breeder reactors that recycle spent nuclear fuel from conventional reactors, effectively solving the problem of waste and turning nuclear into a form of renewable energy. At the same time, China has developed its indigenous new generation design and is going to market it aggressively all over the world, backing it with a cheap financial packages.

Particularly galling for the West, already reeling from the consequence of Chinese success in the solar industry, in these circumstances would be the dominance of foreign nuclear companies. Flawed policies have already pushed the Western nuclear vendors, such as Westinghouse and Areva, to the brink of survival. Anti-nuclear prejudice in the West hampers the prospects of their revival.

The message to policy makers is clear. Recognise where the urgency of the climate change challenge is taking us. Accept that the era of fossil fuel consumption, which powered the economic growth of the last century, is over. Understand the limitations of renewable energy and embrace nuclear as its natural complement.

The necessary nuclear renaissance won't win short term political plaudits. Instead, it will do something far more valuable and enduring. It will deliver to grateful consumers and voters clean, reliable and affordable energy, coupled with economic benefits for those countries smart enough to be competitive in the industries which supply it.

Image: High-tension electrical power lines are seen near the Golfech nuclear plant on the border of the Garonne River between Agen and Toulouse, France, September 23, 2017. REUTERS/Regis Duvignau