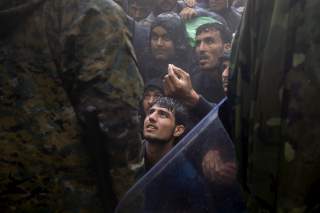 The young Afghan attackers are saying, yes, that they have no impulse control, that their hormones are raging, and that they hate themselves and the world—but most especially, that they will not tolerate women who are happy, confident and feeling safe in public spaces. They are saying that they have no intention of respecting law, custom, public opinion, local values or common decency, all of which they hate so much that they are ready to put their own lives, their constructive futures and their freedom on the line for the satisfaction of inflicting damage.

Established middle-class diaspora Afghans are understandably upset and embarrassed to see their nationality thus disgraced by these uncouth newcomers. And yet they are part of the problem. Many of their actions and reactions, however natural or unintended, amount to complicity. They cover up, make excuses for, advise on best ways to wriggle out of consequences, and even directly abet the deceptions, illegal acts and disgraceful manners of friends, relatives and random unknown fellow Afghans.

The reasons for this are many-layered. There is the perceived obligation to be loyal to friends and relatives and countrymen. I think there is also a certain lack of true identification with Western notions of bureaucratic and biographic fact; many, if not most, Afghans currently living in the West have some lies of necessity in their past. Whichever of them arrived first—a father, an older brother—generally had to make up a supposed family name and a birthdate on the fly, because back home, until one generation ago most people did not have a last name and birth dates were not recorded. I know respectable, law-abiding Afghan families where everyone’s birthdays are implausibly sequential—June 1, June 2, June 3 and so forth, because the family member who filled out the immigration paperwork had to make up birth dates and thought it would be easier to remember them this way.

It is also possible that this diaspora community, given the weakness of state institutions in their country of origin, the arbitrariness of its corruption-riddled administrations for centuries, and a certain lack of rootedness that comes from being dropped into someone else’s culture and way of doing things, is fine with a bit of finagling of welfare benefits. They don’t, of course, endorse rape, but here embarrassment kicks in and inspires them to make excuses. “They’re young.” “They’re confused.” “They grew up in Iran, where one learns bad behavior.” Others just disavow them altogether and want nothing to do with them. That’s regrettable, because Afghans who have already made respected lives for themselves abroad are in the best position to discipline and teach the delinquent newcomers, to know what combination of sanctions, pressures and encouragement will be effective.

Complicated problems, to be sure, but why should they concern us here in the United States, beyond mere anthropological curiosity? Well, first of all, these young men are “ours.” They grew up during the years in which we were the dominant influence and paymaster in Afghan society. Since 2001, we have spent billions on an Afghan school system that we like to cite as one of our greatest accomplishments. These young men either attended these schools, in which case the investment in their education has been worse than useless, or did not have access to a school, in which case the money must have been fraudulently diverted. We have also invested many, many millions of dollars on gender programs and rule-of-law programs to convey notions of female equality and human value, and regard for law and order. We have funded radio programs and entire TV stations devoted to this goal, launched poster campaigns and sponsored at enormous cost a large number of civil-society groups purporting to disseminate these values. And here, now, are our “graduates,” rampaging across Europe like the worst sort of feral beasts.

Secondly, the relevance to U.S. refugee policy is sadly obvious. It will require rigorous vetting indeed to weed out such deeply disturbed, degenerate young males whose willingness to be deceptive is so pronounced and whose motives are so irrational.

Which brings me to a final theory being vented in Austria: that these destructive, crazed young men are being intentionally infiltrated into western Europe to wreak havoc: to take away the freedom and security of women; change patterns of behavior; deepen the rifts between liberals, who continue to defend and find excuses, and a right wing that calls for harsh measures and violent responses; to inflict high costs and aggravation on courts and judicial systems and generally make a mess of things.

For the record, I am not convinced that there is a deliberate plan behind this, but I do agree that angry and unstable young men are susceptible to destructive paths. Those paths can lead to ideological extremism and terrorism, or to the formation of gangs and packs that attack, harm and destroy. As we have seen, presently many of their attacks are inept and easily blocked by random civilian passersby. But they will get more skillful over time, and Europe had best develop a defense against them.

What to do? The necessary measures, I think, are obvious.

Anyone convicted of a felony or any kind of sexual crime should be immediately deported, and that consequence should be made known to new arrivals as part of their initial orientation. This is the only way to stop the accelerating problem. (Doing so will, of course, require changes to European law.)

Every arriving refugee and asylum seeker must be subjected to rigorous fact-checking of their story, including validation of their asserted age by lab testing if there is any doubt. Yes, it’s troublesome and costly, but not nearly as troublesome and costly as letting the wrong people in, or putting hundreds of thousands of foreigners permanently or semipermanently on the dole with benefits they are not entitled to. And European countries must share the resultant data with each other, and identities must be linked to fingerprints, not to documents of dubious authenticity or no documents at all.

Members of the relevant diaspora communities must make very clear to the refugees that they do not approve of and will not assist them with their false claims, cheating, bad behavior or crime. They should instead emphasize by their own example, as well as by direct outreach, that a good and fulfilling life is possible in their new homes with hard work, a sincere effort to fit in and a cooperative attitude.

Finally, the Left has to do a bit of hard thinking. It’s fine to be warm, fuzzy and sentimental about strangers arriving on your shores, but let’s also spare some warm, fuzzy and sentimental thoughts for our own values, freedoms and lifestyle. Girls and women should continue to feel safe in public spaces, be able to attend festivals, wear clothing appropriate to the weather and their own liking, travel on trains, go to the park, walk their dogs and live their lives. This is a wonderful Western achievement, and one that is worth defending.

Dr. Cheryl Benard was program director of the Initiative for Middle Eastern Youth and the Alternative Strategies Initiative within the RAND Corporation’s National Security Research Division. Her publications include Civil Democratic Islam, Building Moderate Muslim Networks, The Muslim World After 9-11, The Battle Behind the Wire - US Prisoner and Detainee Operations, and Eurojihad - Patterns of Islamist Radicalization and Terrorism in Europe. Civil Democratic Islam was one of the books found in Osama Bin Laden’s library during the raid on his compound.

Image: Migrants and refugees beg Macedonian policemen to allow passage to cross the border from Greece into Macedonia during a rainstorm, near the Greek village of Idomeni, September 10, 2015. REUTERS/Yannis Behrakis/File Photo​