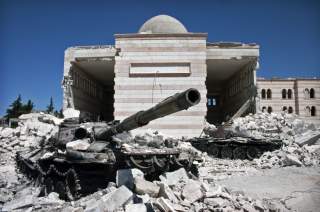 The Islamic State of Iraq and the Levant (ISIL) is the terrorist organization every counterterrorism official, western government and U.S. politician is talking about. Flush with hundreds of millions of dollars in its coffers and in control of a significant stretch of territory between the Syrian city of Raqqa and the Iraqi city of Mosul, the Islamic State has become a household name for members of the CIA, FBI, MI5, MI6, Mossad, FSB—every intelligence organization under the sun. The simultaneous, coordinated attacks throughout Paris on November 13 have been a wake-up call for this counterterrorism community: the Islamic State is not content with simply building up its caliphate in the heart of the Middle East.

Yet, with all of the concentration on the Islamic State, another highly significant and dangerous terrorist organization is operating largely under the radar: Jabhat al-Nusra. Like its jihadist competitors in the Islamic State, al-Nusra is composed of highly motivated individuals and commanders who would like nothing more than to strike at the United States or at targets in Europe. Jabhat al-Nusra shares the same, minority-within-a-minority Salafi-Jihadist interpretation of Islam as ISIL, despises any and all sectarian groups outside of Syria’s majority Sunni community and has engaged in the same kind of atrocities that have made ISIL’s Abu Bakr al-Baghdadi the most wanted international terrorist alive.

Leadership with ties to Al Qaeda

The senior commanders and operatives of al-Nusra and the Islamic State may be at each other’s throats today, but the two organizations very much operate in the same circles. Indeed, some of Nusra’s key commanders were originally members of ISIL’s predecessor group, the Islamic State of Iraq, when tens of thousands of U.S. troops were still in that country clearing neighborhoods and training the Iraqi Security Forces. Abu Mohammad al-Jolani, al-Nusra’s leader, was assigned by Abu Bakr al-Baghdadi to open up an affiliate branch in Syria in order to take advantage of the deteriorating security environment when the country’s civil war was escalating. Maysar Ali Musa Abdallah al-Juburi and Anas Hasan Khattab.Al-Juburi, two individuals targeted by the U.S. Treasury Department in 2012, are described as facilitators who assisted Nusra’s formation in Syria on behalf of the broader Al Qaeda network.

The Treasury Department at the time categorized Jabhat al-Nusra as “directly linked to al-Qaida in Iraq.” In other words, before Nusra and ISIL commanders were shooting and bombing one another in the killing fields of Syria, the former was essentially a subsidiary of the latter.

If the Islamic State is known for beheading its enemies, burying its prisoners in mass graves and embarrassing the Iraqi army in the cities of Mosul and Ramadi, Jabhat al-Nusra’s calling card is successfully planning and executing operations against Syrian army and government facilities that one would think are highly protected by Assad’s security apparatus. Unsurprisingly, suicide bombings are the favored tactic of the organization. But in many cases, suicide bombings are only a part of the operation—the blasts are typically used to soften up a target, catch the Syrian army or pro-government militias on the back foot and create the kind of time and confusion that improves Nusra’s ability to take a building or neighborhood.

Before the Islamic State was operating on the ground in Syria, Jabhat al-Nusra was carrying out highly lethal terrorist attacks in the heart of the Assad regime’s territory. The first attack that the international media picked up—and which in hindsight was highly likely to be a Nusra operation—Jabhat fighters conducted a double-suicide bombing in front of Syria’s State Security Directorate and an army office in Damascus, killing 44 civilians in the process. In May 2012, another suicide bombing in Damascus claimed 55 lives and was broadcasted by the group as retaliation for Assad’s use of lethal force against the Syrian population. The group’s offensive activity markedly increased in 2012: according to Aaron Zelin of the Washington Institute, the group claimed responsibility for 60 attacks in June 2012 compared to seven in March of the same year. Over four years after the first terrorist attack was acknowledged by the organization, Jabhat al-Nusra continues to specialize in the kinds of attacks that other opposition groups in Syria are either unwilling or incapable of executing: strikes at the source of the Syrian regime’s military power.

Listening to the Leader

It is very rare for a head of a terrorist group to sit down for an interview with a news organization. While Osama bin Laden first sat down with a western journalist in the late 1990’s, he quickly eschewed those face-to-face encounters after 9/11, when the entire weight and fury of the United States intelligence community and military were searching for his location. Abu Bakr al-Baghdadi hasn’t given any interviews to journalists; with the exception of a public sermon in Mosul after ISIL captured the city in June 2014. The rarity with which he appears in public has given him a mysterious aura among supporters of his caliphate, and has certainly not helped counterterrorism officials hoping to neutralize him.

Abu Mohammad al-Jolani, however, has given two interviews with Al-Jazeera—the first in 2013, when many thought Bashar al-Assad was on his way out, and again this year, when he attempted to explain what Jabhat al-Nusra wanted to accomplish and what he viewed as the end-state of the war.

Based on the contents of both interviews, Jolani is a highly-secretive man who wants the international community to understand what his ultimate objectives are: “We are only here to accomplish one mission, to fight the regime and its agents on the ground, including Hezbollah and others.” Syria’s Alawite population, he argues, has nothing to fear from al-Nusra once the war is over. “Our war,” he says, “is not a matter of revenge against the Alawites despite the fact that in Islam, they are considered to be heretics.” And if the United States has any concern that Jabhat al-Nusra will attempt to strike Washington or New York, they need not worry, Jolani explains in the interview. As long as the United States does not target Jabhat al-Nusra directly, the group has no reason to lash out overseas.

Each of Jolani’s statements could be considered simply strategic. Al-Nusra’s chief has an incentive to lower the temperature in order to create a sense of complacency in western nations about the group’s objectives and capabilities. And yet it’s interesting that Abu Mohammad al-Jolani spoke to a media outlet at all, attempting to create an image that his organization is a relatively local phenomenon with local objectives.

A radical, but pragmatic, terrorist group

If there is one element that makes Jabhat al-Nusra potentially more dangerous than the Islamic State, it is the former’s willingness to attach itself like a barnacle to other Syrian opposition groupings. Whereas Abu Bakr al-Baghdadi and his commanders show no tolerance for other rebel units and seek to either eliminate them or dominate them by force, Jabhat al-Nusra has demonstrated the nimbleness and pragmatism that is so often required on the field of battle.

In multiple operations against Syrian government troops, al-Nusra has acted in concert with more moderate rebel battalions and relegated itself as a member of a coalition rather than as the dominant player at the top of the hierarchy. The successful rebel offensive this year in Idlib province, which pushed the Syrian army from Idlib city, Jisr al-Shughour and Ariha, was made possible in large part due to al-Nusra’s cooperation with other groups in the field. You will be hard pressed to find a similar operation being carried out by the Islamic State, which has labeled all other rebel factions as a challenge to its authority or amateurs that need to be controlled for their own good. Nusra’s relatively positive relationships with a broad list of rebel groups also provide the movement with the kind of momentum and goodwill that could be exploited in a post-conflict environment.

Jabhat al-Nusra may be pragmatic, but they treat their rivals in the field and the prisoners in their custody with just as much savagery as the Islamic State treats theirs. Beheadings, torture, rape, stoning and public executions of suspected enemy collaborators are all part of the Nusra way-of-war. Human Rights Watch best summarizes their behavior in their recent report: “Eight survivors and witnesses described how opposition forces [including Jabhat al-Nusra] executed residents and opened fire on civilians, sometimes killing or attempting to kill entire families who were either in their homes unarmed or fleeing from the attack, and at other times killing adult male family members, and holding the female relatives and children hostage.”

All the attention directed towards ISIL is warranted; no resolution to the crisis in Syria comes without dealing with this destructive entity. The same, unfortunately, is also true of Jabhat al-Nusra.