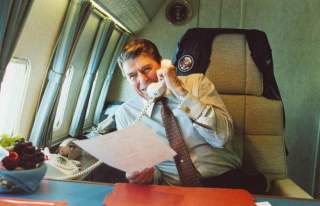 Burnham’s view of American hegemony can be seen as the product of an intellectual tendency that George Orwell attacked scathingly in his essay on The Managerial Revolution—namely, to predict a continuation of the thing that is happening. “Now the tendency to do this,” wrote Orwell, “is not simply a bad habit, like inaccuracy or exaggeration, which one can correct by taking thought. It is a major mental disease, and its roots lie partly in cowardice and partly in the worship of power, which is not fully separable from cowardice.”

Applying this critique to Burnham’s imperial flirtation, we can say that the anti-Communist intellectual saw the Cold War as an epic global struggle between Western civilization and the artificial ideology of Russian Bolshevism. And, since it was a global struggle, the winner would inherit the globe. This tendency to see the conflict in such stark, linear terms—extending current struggles out into the future without regard to possible intervening forces—overwhelmed Burnham’s commitment to realism. Thus, he didn’t give sufficient weight to the elements normally explored by foreign-policy realists—for example, the importance of spheres of influence, balance-of-power considerations, the intrinsic difficulty and cost of expansive conquest (leaving aside global conquest), and the relentless force of religious, cultural and ethnic impulses that rise up in response to threatening hegemonic missions. Such matters rarely came under Burnham’s scrutiny during his long Cold War struggle on behalf of Western resolve.

But he didn’t abandon these considerations entirely and seemed more taken with them in the latter years of his Cold War commentary—as, for example, when he suggested that a post-Soviet Russia could legitimately lay claim to a dominating position vis-à-vis Ukraine, which had been part of the Russian sphere of influence for centuries. It caused a bit of a firestorm, but he never relinquished this position and thus gave a nod to the realist principles of spheres of influence and balance of power. This contradiction—spheres of influence versus hegemonic ambition—presaged the foreign-policy debate that ensued with the end of the Cold War.

But that contradiction does not lessen the significance of Burnham’s advocacy or the sagacity of his analysis during the dark and dangerous days of the Cold War. Nor does it detract from his achievement in producing a strategic vision that ultimately, as embraced by Reagan, became the foundation for victory. Still, the world has moved beyond the Cold War, as it has moved beyond Burnham and just about everyone else who played any historic or heroic role in that struggle. The biggest lesson of the Cold War victory is that it emerged from a strategy that was tailored specifically for that challenge. Subsequent challenges, including those faced by America today, require counterstrategies that are similarly enlightened.

Robert W. Merry is the political editor of The National Interest and an author of books on American history and foreign policy.