Is James Comey Baiting Donald Trump into Making a Mistake? 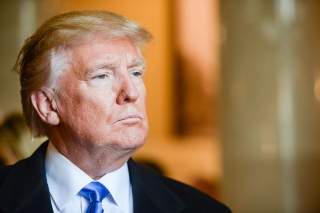 The tweet the world had been waiting for finally came Friday morning. President Trump shook off his constraints and took aim at ousted FBI Director James Comey.

“Despite so many false statements and lies, total and complete vindication...and WOW, Comey is a leaker!” declared the leader of the free world.

Each time the Trump administration has faced trouble, usually in the form anonymous sourced stories or astonishingly detailed accounts of Oval Office conversation, the president and his defenders have performed a delicate dance with their detractors.

Anti-Trumpers tend to argue that it is the substance of what is being leaked the matters, the specific allegations against the president or his subordinates. Trump and his deputies generally try to put the focus back on the leaks themselves, calling them illegal, unethical and in some cases downright dangerous to the American people.

For a time, the congressional investigations into Russian interference in the 2016 presidential broke down along similar partisan lines. The Republicans, especially in the House, were interested in leaks and the “unmasking” of surveilled Trump officials. The Democrats were concerned with collusion between the campaign and Russia

Comey’s admission that he submitted the contents of a memo detailing his discussions with the president to the New York Times through a friend sets up the biggest battle between leaking and what is being leaked yet. It’s a fight Trump seems especially eager to pick.

The contents of the Comey memo as confirmed to the Senate Intelligence Committee were explosive enough. The former FBI chief portrays Trump as someone who sought to influence an investigation into an associate and former national security adviser, who wanted to create a “patronage” relationship with the head of an independent law enforcement agency and hoped to extract personal loyalty oaths from high-ranking government officials.

But in Trump’s eyes, he has finally caught one of the leakers and it is a doozy—the man he fired as director of the FBI. A holdover, in fact, from former President Barack Obama’s administration. Straight out of Trump lore.

"Comey's excuse for this unauthorized disclosure of privileged information ... appears to be entirely retaliatory," Trump lawyer Marc Kasowitz said in a statement. Kasowitz later indicated he planned to file a complaint against Comey with the Justice Department.

Much of Comey’s testimony was exculpatory with regard to Trump. He confirmed that he had thrice assured the president he wasn’t under investigation. He acknowledged Trump seemed more interested in getting that fact out in public than he did in shutting down the Russia probe. He said Flynn was not a big part of that probe. No matter how much Comey called Trump a liar, little of what he revealed failed to lend itself to more innocent explanations of the president’s behavior.

Never one to quit while he is ahead, Trump wants to escalate his fight with Comey. Unwilling to accept a more charitable interpretation of his intervention on behalf of Flynn—say, a mildly inappropriate character witness for a recently fired presidential appointee that wasn’t followed by any tangible action to thwart a continued investigation—he denied saying what Comey has attributed to him.

Trump not only takes issue with the way Comey interpreted his words or intent. He didn’t say to let Flynn go and he didn’t demand a “pledge of allegiance.” “It doesn’t make sense,” Trump told reporters. He insisted he was “100 percent” willing to testify to that effect under oath.

This is potentially dangerous territory. Comey has already testified under oath. Just as he was trying to get a special counsel appointed through leaking his conversations with the president to the media, he was clearly trying to get Robert Mueller to open an investigation into obstruction of justice by Trump, assuming one hasn’t been opened already.

It would be a cruel irony for the president if he was never the target of an investigation under “nutjob” Comey but is one now or becomes one at some point.

Perhaps Trump has tapes of their conversation. He keeps hinting that this might be the case, though he warned reporters they would be “disappointed” to learn the truth, whatever that means. Lordy, Comey hopes so. (Although it is a bit strange he sprang from bed to leak his memo when Trump first tweeted about the tapes—wouldn’t any discrepancies between the recording and the memo be resolved in favor of the tape?)

Is Comey baiting Trump into making a mistake that could imperil his presidency? As Trump has said of the tapes’, we may find out over a very short period of time.