This Is James Comey's Revenge 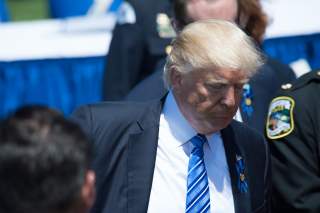 Donald Trump in many ways is the inverse of James Comey. Trump was a tycoon, first of real estate and then of himself, who came to embody the glittery excesses of the 1980s before breaking out of his Sherman McCoy milieu and winning the presidency, elected because voters believed he was bad enough to do some good. Comey was the incorruptible lawman, the one with the descriptor “Boy Scout” next to his name in all the stylebooks, who took pride in hovering above politics only to be dragged down into the partisan muck. And here we thought Chuck Schumer would give the president headaches; in retrospect, these two seemed predestined to clash.

And they did: Trump sacked Comey from the FBI exactly one week ago, and now Comey’s revenge tour has begun. The New York Times broke news last night that Trump allegedly pressured Comey to squash the bureau’s investigation into former National Security Advisor Michael Flynn, a confidant of the president’s. According to Comey’s notes, during a chat in the Oval Office, Trump said, “I hope you can see your way clear to letting this go,” and called Flynn a “good guy.” Comey agreed only that Flynn was a “good guy” and later drafted a memo detailing this unsettling interaction, which he showed to top officials at the FBI. It was one of those associates who yesterday relayed its contents to the Times.

So now the term “obstruction of justice” is being tolled like a bell while even the GOP House Oversight Committee chairman announces a subpoena and Sean Hannity leads a dwindling platoon of White House loyalists into a charge against what he calls the “Destroy Trump Media.” The witlessness of that neologism aside, Hannity is correct that much of the press is locked in groupthink against the president. Now they may have the smoking gun they’ve craved. This is very bad; bad enough that Fox News announced last night they hadn’t been able to book a single Republican member of Congress to defend Trump. When politicians are refusing to go on TV, the laws of physics have been reversed.

Trump’s scandals have now crossed the threshold from unseemliness to potential illegality. No longer can we roll our eyes and note with fatigue that there still isn’t any hard evidence of malfeasance, as we’ve been doing over the inflated allegations of Russian collusion. Post-interview memoranda like the one recorded by Comey are frequently used by government investigators in criminal cases. If the memos are real, then “obstruction of justice” will continue to peal, along with an even more cacophonous word: impeachment. Whether there are legal consequences will depend on congressional Republicans, who are still generally loyal to Trump but also no doubt tired of having their legislative priorities upended by drama and wary of the midterms in 2018.

In the meantime, two questions need to be answered. The first is one of intent: Did Trump actually mean to pressure Comey into dropping the Flynn investigation? Or was he just being his voluble self and yet another pillars-of-justice-shaking remark accidentally tumbled from his lips? (“Did you try the coffee? I’m fond of coffee. So is Mike Flynn. I hope you’ll let this case against him go—case! I need a new briefcase.”) The Times reports that before making the remark to Comey, Trump first asked Attorney General Jeff Sessions and Vice President Mike Pence to leave the room, suggesting intent was there. But he also didn’t begin by speaking about Flynn, instead opting for the not-less-discomforting subject of why the FBI should imprison reporters who publish classified information—so perhaps this was a tangent gone wrong.

Whatever the case, the second question is broader and must be answered first: Is the New York Times’ reporting on James Comey’s memo an accurate assessment of what happened in the Oval Office that day? It is, after all, a thirdhand account (Comey told his associate, who told the newspaper) centering on a disgruntled former employee and passed along by an anonymous source. That last part especially irks. The country is weary of news articles premised on faceless “government officials,” a term that presently encompasses everything from Steve Bannon to golden-showers erotica. If Comey was illegally accosted by Trump over the Flynn investigation, he needs to put his name to this story, testify about it in public as he’s offered to do, and turn over any additional information he might have to the pertinent congressional committees.

No more anonymous quotes and no more errant speculation. This is very real and the stakes are high.