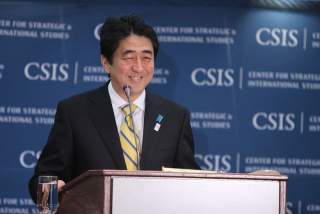 Earlier this month, Japanese prime minister Shinzo Abe wrapped up a three-day visit to Bangladesh and Sri Lanka, adding to the list of his extensive travel itinerary since retaking office in December 2012. The trip followed a key visit to Japan from new Indian prime minister Narendra Modi, which served to add emphasis to a growing strategic relationship between Tokyo and Delhi. And, like many other of Abe’s travels over the past several months, the visit was very closely aligned with a trip to the region by Chinese leader Xi Jinping this week.

While in Bangladesh, a state traditionally more influenced by China, Abe scored an important victory with Dhaka’s backing of Japan’s bid for a nonpermanent seat at the UN Security Council. This was an important concession as Bangladesh had previously indicated its own desire to bid for a seat on the Council. During the bilateral summit in Dhaka, Bangladeshi prime minister Sheikh Hasina agreed to drop these plans, however, and lend support to Japan’s bid. Abe’s visit follows up a three-day visit to Japan from Hasina this past spring, through which both sides agreed to elevate their bilateral partnership to a new level. As part of this, both sides agreed last week to launch foreign-minister-level dialogues beginning next year in Dhaka.

Traditionally, Japan has always been a generous donor of overseas development assistance (ODA) to Bangladesh. Moreover, Japanese companies have looked at Bangladesh—with its large population and rising GDP growth—as an alternative business destination to China, thanks to the country’s massive cheap labor force. But what Bangladesh lacks to keep its engine running toward sustainable development is key foreign direct investment (FDI). Long-term political instability, bureaucratic procrastination and corruption have all marred Bangladesh’s image as an internationally business-friendly place. Worse, the wave of violence instigated by the uncertainty of a credible election has only prolonged the country’s woes since industries, including the ready-made garment—the world’s second largest—have been badly hit. Furthermore, the Prime Minister Sheikh Hasina’s disputed reelection has further spooked foreign investors.

During these uncertain times in Bangladesh, Abe’s announcement of a number of Japanese investments has come as a relief to Dhaka. Moreover, Shinzo Abe is the first foreign leader to visit Bangladesh since the one-sided election held in January this year. Abe’s visit had a decidedly investment-orientated angle, as he brought along a number of high-ranking Japanese business executives. The trip also followed a joint private-sector economic dialogue between Japan and Bangladesh held last month in Dhaka. One of the key outcomes from this dialogue and the leader’s summit was an optimistic but cautious Tokyo, which indicated interest in upping its investment. Abe, however, stressed that Bangladesh still has critical work to do first in areas, such as its investment regulatory authority and its energy infrastructure for industry.

Although it is not clear if Dhaka is prepared to put aside its domestic politics to pace Bangladesh with the changing Asian dynamics, it is apparent that Japan is devising plans to enhance its strategic influence in South Asia. The “Bay of Bengal Industrial Growth Belt” initiative, also known as Big-B, forms a centerpiece of Japan’s regional strategy. Japan vows to integrate Pacific and Indian Ocean at the Bay by tapping Bangladesh’s huge potential and geostrategic location. As part of this program, Abe has reiterated his pledge to provide $5.9 billion over next four to five years to help Bangladesh build a deep-sea port and other major infrastructure. Japan’s deal to construct Bangladesh’s largest power plant (ultra supercritical coal-fired) in Maheshkhali is one of the most important of these projects.

But the charm offensive is not strictly from Japan’s business sector. Dhaka is also looking to build its relationship with Tokyo, partly in order to wean itself off an overdependence on China. One example is Bangladesh’s desire to have Japanese investors help it build Special Economic Zones (SEZ) for exclusive Japanese use. In kind, Abe has introduced an entourage of business delegates, including chief executives of heavy-machinery makers IHI and Mitsubishi Heavy Industries, as well as the construction giant Shimizu, to Dhaka. As Abe noted during his trip, “I am convinced to extend cooperation to Japanese entrepreneurs to invest in Bangladesh.”

Following up on the trip to Bangladesh, Abe also made a quick trip to Sri Lanka. Ties between Colombo and Tokyo have also been growing over the past year and Abe’s visit followed up a stay by Sri Lankan president Mahinda Rajapaksa last year. Apart from the financial incentives aimed at development projects in Sri Lanka, Japan also did something else that remained somewhat overlooked. In March, Japan abstained on the vote at the UN Human rights Council that launched war-crimes probe against Sri Lanka. Not only that, Tokyo now examines the possibility of providing the island-nation with patrol ships in an attempt to enhance its maritime security.

Abe and Rajapaksa also agreed to commence a dialogue on maritime-security issues, as well as stronger collaboration between the Sri Lankan navy and the Japanese Maritime Self Defense Forces. Part of this security cooperation will also focus on nontraditional issues, such as humanitarian assistance and disaster relief. In this respect, both sides will enhance coordination on Search and Rescue activities, as well as dialogue between national coast guards.

Of course, regional tensions—highlighted by North Korea and rising Chinese assertiveness in the maritime domain—were also key elements of Abe’s visit. During both stops, Abe was able to explain his security policy of “proactive pacifism”. In addition, with an eye towards Beijing, he secured agreement from both Dhaka and Colombo on the integrity of international maritime and aviation law, as well as the peaceful settlements of disputes.

Despite these positive developments though, Japan’s reach and impact in the region—outside of India—remains limited. Both Sri Lanka and Bangladesh remain heavily dependent on their relations with Beijing, despite significant Japanese assistance to both countries. China has built sea ports, including one in the deep sea in Sri Lanka, and has finalized the deal to provide submarines to the Bangladeshi Navy. Elsewhere in the region, China has funded a massive deep-sea port in Pakistan, as well as a dry port in Nepal. The future of Japan’s strategic relationship with India will be the most critical factor in the coming months to gauge the trajectory of Tokyo’s ties with other regional countries. But, India alone does not complete Japan’s South Asia strategy, and so it is likely to continue to press for stronger relations with Delhi’s neighbors.

J. Berkshire Miller is a fellow on Japan and Chair of the Japan-Korea Working Group with the Center for Strategic and International Studies Pacific Forum. Follow him on Twitter:@jbmllr.

Arafat Kabir is a regional politics analyst based in Bangladesh. Follow him @ArafatKabirUpol.