Japan Is Facing a Demographics Disaster. What Will PM Suga Do About It? 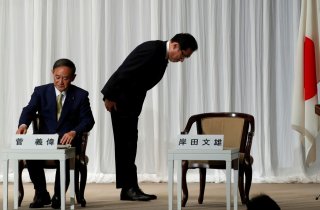 Japan has a new prime minister: Yoshihide Suga. He is now the leader of the world’s third-largest economy and has pledged to carry on the policies of his popular predecessor, Shinzo Abe, most immediately efforts to help the country’s economy claw its way back from the ravages of the pandemic and the lockdowns and quarantines that it seemed to require.

Though Suga also seems committed to following Abe’s line on other, more fundamental economic challenges such as trade and economic revitalization, he has neglected to say anything about the most fundamental and most critical of issues facing the country: the urgent need to deal with Japan’s aging demographics.

This is disappointing. More than any single influence, this aging trend, so severe that Japan’s population is actually shrinking, is responsible for the country’s poor economic performance of the last quarter-century. Ultimately, all policy, whether from a Suga government or his successors, will be judged by how well it deals with this demographic matter.

Suga’s commitment to Abenomics, as the former prime minister termed his policy array, is entirely believable. Suga has kept most of his predecessor’s cabinet in place. Besides, Suga was Abe’s chief cabinet secretary was a party to the program’s implementation. Since it was first launched a little less than ten years ago, the effort has consisted of “three arrows,” to use Abe’s words. One is an expansive fiscal policy with no concession to budget-balancing, even though Japan already faces a huge government debt burden of about 250 percent of the country’s gross domestic product (GDP). The other is a comparably expansive monetary policy in which The Bank of Japan (BoJ) has kept interest rates low and engaged in what the Federal Reserve in the United States refers to as “quantitative easing,” that is providing liquidity to financial markets through direct purchases of securities, even though the bank’s balance sheet already exceeds the country’s GDP. The third arrow has aimed to rid Japan of what some commentators refer to as two economies, one part, the highly competitive and productive export-oriented firms for which Japan is famous, the other, Japan’s inefficient and hardly profitable small business and service sector.

The demands of the pandemic had already put the first two parts of this long-standing program into overdrive. As in many other countries, efforts to support spending during the lockdowns and quarantines and get people back to work as these strictures ease have greatly enlarged already large government deficits. The country just recently rolled out the equivalent of a $2.2 trillion fiscal stimulus, a figure approaching 40 percent of its GDP. Suga will keep up this effort, dipping into the 10 trillion yen (roughly $100 billion) contingency fund to support the economy and passing a new more expansive supplementary budget for the remainder this year. There is already talk of a still more stimulative fiscal stance for 2021 that might even include an income tax holiday for lower-income households. On the monetary front, the policy will, if anything, become more expansive. Suga has shown a greater willingness than even Abe for the BoJ to keep interest rates lower for longer and to continue its securities buying program, including direct purchases of stocks as well as bonds.

The new prime minister’s commitment has actually led him to propose enhancements to Abenomics. Because the program’s monetary expansion has had less than sterling results, Suga plans on regulatory reforms to encourage mergers among regional banks so that they can install modern systems, and hopefully increase lending to small- and intermediate-sized businesses to help them modernize and become more expansive as well as productive. As part of this effort, he also aims to sweep away other regulatory impediments to mergers among small- and medium-sized businesses. To boost public confidence, a crucial ingredient to any economic recovery over any time frame, Suga has christened the economic effort with the most Japanese of slogans: “Self-support, mutual support, then public support.” Hardly a charismatic sort, he has nonetheless elevated the program’s public image by tying it to the new imperial era, called Reiwa, begun now that Emperor Akihito and abdicated in favor of his son, Naruhito. The public has responded positively—if irreverently—referring to the new prime minister as “Uncle Reiwa.”

On trade policy and foreign affairs, Suga will almost certainly follow Abe’s carefully balanced approach and do so to the letter. Like Abe and most of the rest of the country’s leadership, he must accommodate Japan’s important economic relationship with China. Japanese industry was an early investor in China and at least measure had about $120 billion in exposure there. China is by far Japan’s largest trading partner. The two-way flow between the countries now exceeds $300 billion. This economic vulnerability has kept Tokyo reticent about offending Beijing. Japan was the only Asian country that refused to sign the UN condemnation of China’s treatment of the Uighurs and other minorities. Tokyo also refused to join the United States in condemning China’s security laws in Hong Kong.

At the same time, Suga and his cabinet, much like Abe’s government, are well aware that Japan lives in a dangerous neighborhood. North Korea and China, despite the latter’s importance as a trading partner and field for investment, present active threats. The former occasionally fires missiles into the Sea of Japan, while the other routinely violates Japanese sovereignty and frequently challenges Japanese Coast Guard and navy ships around the Senkaku Islands (Diaoyu to the Chinese). Suga had supported Abe’s success in reinterpreting Japan’s pacifist constitution to allow its armed forces to attack missile sites in other countries (read North Korea) if they appear ready to launch a strike on Japan. He was also on board with Abe’s decision to build up Japan’s military and will continue that trend if not necessary to exaggerate it. As part of all this, Suga has made clear that his nation’s alliance with the United States is primary to Japan’s position in the world.

In a few months, this all may become moot. The government must call an election by late October 2021, and that might well change political configurations. It is not as if Suga’s party, the Liberal Democratic Party (LDP), will lose its majority, but there are signs that his premiership is something of a caretaker until party leaders can use the election to weigh the locus of relative political power. It is noteworthy in this regard that Suga has little affiliation with any of the prominent party factions that have controlled the LDP and chosen prime ministers since the party’s founding shortly after the Second World War. Though no politician has said anything publically, Suga may be expected to relinquish his post to a faction favorite after the vote next year.

Electoral politics aside, it is particularly disappointing that Suga, in describing policy directions, has missed the opportunity to introduce still other policy “arrows” to deal with the country’s aging demographics. This has to be Japan’s most pressing fundamental problem. To be sure, Japan is not alone in this. Aging demographics are a matter of concern throughout the developed world. Longer life expectancies and low fertility rates are raising the average age of populations everywhere. As more and more retirees burden a smaller relative number of working-age people, the trend imposes constraints on economic growth.

But international similarities underplay Japan’s predicament. It faces the most severe demographic problem by far. About a third of its population is older than the age of sixty-five. There are about two people of working age for each retiree in the country. Consider that each of these workers needs to support himself or herself, dependent children, and half the living and healthcare needs of each retiree. If Japan is to grow, then it desperately needs to enhance its productive abilities. Worker productivity improvement—more output per hour from each worker—is a goal of Abenomics as well as Suga’s enhanced version, but it can only go so far. Japan also needs to raise its retirement age and the participation of women in the workforce, one of the lowest in the developed world. It would also help if the country was receptive to productive immigrants. Neither of these solutions fits well with the country’s culture, nor has Japan made much progress on any of these fronts.

Abe talked about this urgent need when he first came to office nearly a decade ago. He tried to get participation rates among women to rise and made provisions for Japan to accept more immigrants. But the demographic conversation and the effort to address it stopped, no doubt because of Japan’s cultural headwinds. Suga has made little mention of this fundamental problem and its basic needs. But however carefully constructed the rest of his domestic and foreign policies are, he must deal with this matter, or Japan will continue to languish in the near-stagnation that has characterized its economy since the last decade of the last century. If he relinquishes his post, then the next prime minister will have to step up to this need or Japan will continue to decline relative to the rest of Asia and the world. Not too long from now, that decline will become absolute. Then, little else in the government’s program will matter.