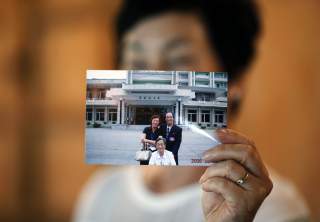 If one strolls through the halls of security-minded government ministries in Japan, like most government buildings in the developed world, bulletin boards and stairwells can be found dotted with posters and signs advocating good workplace conduct, telephone hotlines for the overstressed, and the importance of good energy stewardship. Rounding a corner, however, one may be surprised to find a large poster featuring an elderly gentleman draped in a long overcoat, staring sadly into the distance, with a large tagline stamped in oversized characters: “Abductions: We Must Take Them Back!”

There are few international crimes stranger than a rash of abductions which plagued Japan in the late twentieth century. From 1977 to 1983, in a bizarre form of espionage, North Korean agents kidnapped and brought to North Korea at least seventeen cases involving Japanese citizens, and an indeterminate number of “Korean Domiciled” citizens (a unique nationality status found only in Japan which indicates ethnic Koreans who are neither citizens of a Korean country nor full Japanese citizens). While the ultimate goal of this unorthodox espionage campaign is known only to the North Korean government, suspicions have ranged from acquiring a tangible asset to use during negotiations to providing cultural examples or language teachers for North Korean agents to copy in order to prepare for future infiltration missions to Japan.

For Japan, the issue is one of pride and heartbreak, and it remains in play for the upcoming South Korea-North Korea and U.S.-North Korea summits. To the average Japanese citizen, the abductees’ stories strike closer to home than any threat of attack, even more than missiles which overfly the islands. There are tragic elements to the stories that would tug at the heartstrings of anyone. What’s worse, as the abductees aged and allegedly expired in North Korea (North Korea claims all but five abductees returned in 2004 are dead), thoughts have turned to the younger abductees (the youngest being thirteen at the time of her kidnapping, and the daughter of the old man in the aforementioned poster) who may never be able to see their parents again. This alone is enough to make any leader bring up the issue at every diplomatic opportunity, which is what Japan does.

The upcoming Inter-Korean Dialogues is one such opportunity. One can make an argument that this moment is exactly why North Korea kidnapped Japanese citizens in the first place, though it is more likely the leverage currently provided by the victims is a result of lucky buffoonery (the background of the victims seems to indicate poor planning, no North Korean forethought, and no importance placed on the professional or political value of the victims). As the victims continue to age and spend more time away from Japan, their diplomatic usefulness to the brutal Kim regime decreases; one of the few remaining effective ways to utilize the abductees is to return them to Japan for the chance to mollify the United States. Time is running short for North Korea to either use the captives or lose them as a political tool.

In fact, the upcoming U.S.-North Korea summit may be the one opportunity to solve the abduction issue before it becomes impossible. It is difficult to see what strategic value the remaining aging Japanese citizens could bring North Korea except more disdain and mistrust from the outside world; harmless middle-aged and older prisoners hardly qualify as national interests. The Kim regime would also profit from their release, as a way to demonstrate to Japan’s terrifyingly powerful ally and existential threat to the regime, the United States, that the North is capable of relating to the West in a way the West understands, albeit late in the day.

This opportunity is not lost on Japan. According to Japanese media reports, Prime Minister Abe has asked South Korean president Moon Jae-in to broach the topic of returning the abductees to North Korea during the upcoming inter-Korean dialogue—which is rather like asking a rival chef in a cooking contest to borrow his ingredients. Given what Moon has to worry about, it is unlikely he will include the topic on the admittedly long list of potential discussion points during this first meeting. But the abduction issue does represent a rare problem on which South Korea and Japan can agree. Leaders of both nations are hard-pressed to outflank the rhetoric and historical grievances of their respective parties in order to better address mutual-security concerns, and efforts to collaborate usually fall on their face under the withering fire of domestic hard-liners; a chance to execute a humanitarian effort on behalf of a difficult neighbor represents a comparatively easy foreign-policy victory for the challenged relationship, though it’s a move which would certainly cost Moon with his hard-line backers.

The fact Abe asked the question demonstrates the all-too-clear fact that Japan effectively possesses little to no diplomatic leverage on the Korean Peninsula; the Korea-Japan reconciliation discussion regarding Japan’s pre-war and wartime activities has not appreciably advanced in several decades, and there aren’t enough apologies in the world to prevent both Koreas from hanging Japan in effigy for political point-scoring at home. In addition, Japan has no plans to back away from its maximum-pressure pledges and its total denuclearization demands, making its political well with North Korea dry indeed.

Without a reliable South Korea in its corner, Japan has two viable options left to deal with the abduction issue: either hold a Japan-North Korea summit or advance the matter via the United States. Abe is likely to bring up the topic with President Trump during his upcoming April dialogue in Washington, and the United States represents Japan’s best chance to get the abductees returned. Abe already attempted to set the stage with the United States during President Trump’s recent visit to Japan in October 2017, where the president pledged to help Abe’s efforts to bring the abductees home. Naturally, Japan is worried a feckless U.S. diplomatic effort could disenfranchise it from any solution to the abductee problem, no matter what is concluded at the upcoming summits.

Alas, it all may be moot; as many have already concluded, the odds of the upcoming summits producing a favorable diplomatic solution to conflict on the Korean Peninsula for all parties are quite small, though not impossible. This is no excuse not to try, of course. But a mercurial North Korea vowing to never give up its nuclear arsenal, such as it is, and a United States and Japan demanding complete and total dismantling of North Korea’s nuclear weapons program do not make for optimistic prospects.

Judging by how North Korea has broken every promise it has ever made regarding denuclearization, all sides may end up walking away empty-handed after the upcoming summits; and the abductees may continue to languish with little hope of return. But we know North Korea promised to find and return the rest of the victims as recently as 2014. Also, the North Korean government’s 2016 unilateral cancellation of the “Special Investigation Committee,” the erstwhile bureaucratic organ charged with finding abductees on the North Korean side, should be seen as reprisal for Japan’s participation in recent North Korean sanctions, and not as an end to abductee return discussions.

Some pundits claim that the next inter-Korean summit will include reuniting families as a topic. What better way to prove this commitment than to reunite families which are already known to be wrongly separated?

Major John Wright is a U.S. Air Force officer, pilot, and a Mike and Maureen Mansfield Fellow. He is currently serving as Japan Country Director, International Affairs, Headquarters Pacific Air Forces, Honolulu, HI. The views expressed in this article are solely those of the author, and not those of the U.S. Air Force, U.S. government, Mansfield Foundation, or any foreign government.