Japan and South Korea Want to Look to the Future. But They Can't Agree on the Past. 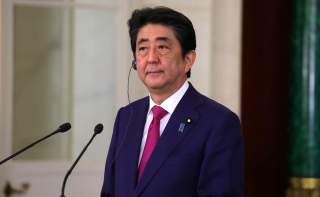 A new Nikkei poll indicates that over 60 percent of Japanese believe relations between Tokyo and Seoul will remain “unchanged.” This poll reflects their negative assessment of the mid-May meeting between Moon Hee-sang, representative of South Korean president Moon Jae-in, and Japanese prime minister Shinzo Abe. It also reflects what the Abe administration wants for its relationship with the new government in Seoul.

The poll, however, does not define “unchanged.” One assumes this means the immediate future will remain contentious. In many respects, it is a mischaracterization of the current situation. Relations between the two neighbors have improved steadily over the past year. Bilateral meetings have restarted, and military cooperation has strengthened.

It is also not the message delivered by Representative Moon. His was a positive one, striving to ensure a smooth restart of bilateral relations amid shared tensions over North Korea, uncertainties created by President Donald Trump and the growing assertiveness of China. He termed it “future-oriented,” echoing an oft-repeated diplomatic aspiration by Japanese officials.

According to Moon, Abe “cheerfully” accepted President Moon’s request to resume annual direct top-level talks with Seoul. These had been suspended since 2011. Both sides provisionally agreed to hold summit talks as soon as possible. Abe later indicated that the sidelines of this July’s G-20 summit in Germany would be such an opportunity. On North Korea, they emphasized their common challenges and the necessity of bilateral cooperation.

The Japanese prime minister emphasized that Tokyo and Seoul are each other’s “most important neighbors, sharing strategic interests.” What they do not currently share is an understanding of Imperial Japan’s colonial history—and it is here that a stalemate arises. Yet, the Korean envoy was careful to again reflect Japanese rhetoric and note that Seoul was adopting a two-track mode of diplomacy that separates historical issues from those of economic and security cooperation.

They acknowledged that the December 2015 Comfort Women accord was unsatisfactory. Their respective reasons were left unsaid, but both hinted that further discussion and management were possible. Abe asked Korea to “properly manage” instead of “implement” the deal, while Moon avoided references to any “renegotiations” and simply proposed a “fresh bilateral effort.”

But how far can this go? Positive words and repeated references to an optimistic “future” aside, Tokyo and Seoul remain divided on their interpretations of their shared history, including the Comfort Women, the Dokdo territorial dispute, forced labor and colonialism. On North Korea, President Moon, also differing from Prime Minister Abe, favors engagement and dialogue with Pyongyang.

Most important, Abe’s political imperatives do not suggest positive cooperation with the Koreans. His government is in the midst of a constitutional debate over empowering Japan’s military, political scandals suggesting influence peddling, and possible parliamentary elections this summer. In all cases, he must depend upon his conservative-nationalist political base, which can deliver votes and cash.

They are united by their aggrieved nationalism and outspoken opposition to anything Korean. They believe imperial Japan’s history has been misrepresented and demeaned. Thus, there is no immediate political upside for Abe to compromise with a new Korean government that questions this narrative.

Japan has already signaled that it will continue its combative stance toward South Korea through the Comfort Women issue. Within days (May 23) after Representative Moon’s Tokyo visit, Japan’s Foreign Ministry submitted a rebuttal to the UN Committee Against Torture’s suggestions that the December 2015 agreement needed to be revised, and that the Comfort Women were “sex slaves.” Abe then misrepresented his discussion with UN General Secretary António Guterres on the sidelines of the G-7 Taormina Summit (May 26) as supportive of the December 2015 accord. And on June 1, Japan’s consul general in Busan was replaced for criticizing the prime minister’s Comfort Women views and possibly sending the “wrong message” to Korea.

The narrow result is that the Abe administration has repeatedly abrogated a provision in the December 2015 accord against “criticizing” South Korea about the Comfort Women issue “in the international community, including at the United Nations.” This has been a pattern throughout the past year—such as the February submission by the government of Japan of an amicus curiae brief to the U.S. Supreme Court, asking for the removal of a Comfort Women memorial in Glendale, California—but is now accelerating.

It is not accurate to assume that things will remain the same between Japan and Korea, as the Japanese people believe. Instead, they will get worse first. Tokyo is setting a lower bar for “improvement” than what Seoul expects. The result is that nothing changes, since an obstreperous Seoul helps Abe in his political battles ahead. His horizon for the future is simply shorter than for South Korea’s new president.