Japan Unleashed: The Good, the Bad and the Ugly 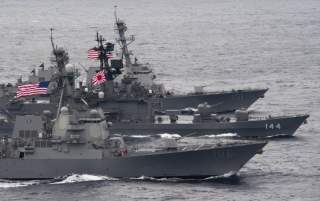 Long fettered by Article 9 of its post-WWII constitution that renounces war as a sovereign right and prohibits the maintenance of military forces, Japan is now poised to unleash its military potential both at home and abroad. The May 14 endorsement of two key defense bills (the international peace support bill and the peace and security legislation development bill) by Japan’s Cabinet signals another big step in this direction. Historically, Japan’s constitution has barred its Self-Defense Forces (SDF) from entering overseas military engagements. The international peace support bill includes the right to exercise collective self-defense, which allows the SDF to assist a friendly nation, first and foremost, the United States, and then other allies and partners, when they are under attack. The peace and security legislation development bill streamlines the process by which Japan can provide logistical support to foreign military forces. Previous constitutional provisions required parliamentary approval each time that the SDF wished to engage in a multinational military operation. This new bill provides a single law under which Japan can assist its allies around the globe.

Japan has good reason to overhaul its postwar military policy. Currently, it faces a host of threats that could require proactive and vigorous military response. North Korea’s pugnacious behavior and growing capability to threaten Japan has been a longstanding concern. China’s recently escalated contest with Japan over the Senkaku Islands and a whole array of other unresolved issues introducing a menacing element into the already precarious relations between the two big Asian nations.

Japanese Prime Minister Shinzo Abe has announced that these landmark security bills will take effect over the summer. Japan’s new military posture, which is reflected in the updated U.S.–Japan defense cooperation guidelines (released in April 2015), could radically alter both U.S.–Japan relations and East Asian military relations. As the United States maps out Japan’s future defense trajectory, it ought to take note of all of its implications: the good, the bad, and the ugly.

The current U.S.–Japan military partnership is strikingly unequal. The U.S.–Japan mutual defense treaty is not “mutual” at all—Japan is not expected to (by the United States) and cannot (by Japan’s constitutional restrictions) come to the United States’ defense. While Japan maintains imposing Self-Defense Forces and hosts U.S. military bases, the United States bears the immense task of defending Japan from foreign threats. In an April 2015 interview with the Sasakawa Peace Foundation USA (a Washington, D.C.–based U.S.–Japan relations think tank), Admiral Dennis Blair, former Commander of the U.S. Pacific Command, characterized the absurdity of Japan’s previous military restrictions by stating, “Until now, if North Korea shot a missile and Japan’s missile destroyer were in a maritime domain and could shoot it down, the commander would say, ‘The target is the United States, not Japan.’”

(Recommended: 3 Ways China and Japan Could Go to War)

Allowing Japan greater latitude to employ its SDF can serve U.S. interests while easing the United States’ hefty military burden. Consider the example of a crisis in Northeast Asia or the South China Sea. As China’s territorial ambitions in the South China Sea ratchet up fear amongst Southeast Asian nations, a single political or military misstep could send the region into disarray. In the event of such a military flare-up, the United States may require extensive logistical support to mount a proper response. Japan’s SDF can now provide the United States with the intelligence and military assistance necessary to handle a delicate situation in the Asia-Pacific. According to Admiral Blair, this assistance could take the form of missile defense and minesweeping in key ports. The SDF’s newly-acquired ability to lend support to its allies will also benefit U.S commercial (as well as military) interests by bolstering freedom of navigation. Now that Japan’s armed forces are permitted to take part in foreign military operations, Japan can credibly help to defend freedom of navigation alongside the United States.

As some U.S. policymakers look at China’s rise with increasing trepidation, Japan’s new defense bills should provide a comforting counterbalance in the Asia-Pacific. The introduction of a new and formidable military presence in the region significantly complicates China’s defense calculus. With the new defense bills, China must worry about Japan as a separate military entity from the United States. The South China Sea dispute has not yet escalated to a level where military forces are required to quell the conflict. It appears that administrative and political means still offer the best chance to resolve the contentious territorial disputes. Still, even in this war of words, Japan’s new military capabilities back up words with firepower and provide balance and deterrence against Chinese assertiveness in the Asia-Pacific.

The Bad: An Unknown Security Future in the Asia-Pacific

The rise of Japan’s SDF interrupts a decades-long trend of U.S. military dominance in the Asia-Pacific. There is nothing inherently unwise about the United States ceding some military influence to the Japanese. Still, from a U.S. policymaking perspective, the rise of Japan’s newly-empowered SDF will mean that the United States will not be able to call all of the shots on behalf of Japan. The United States must understand that, as a militarily-independent nation, Japan may choose to act in ways that clash with U.S. policy interests. For example, Japanese Prime Minister Shinzo Abe's doctrine of "active pacifism" and the tenets of collective self-defense could allow Japan to strengthen its ties with Australia, South Korea, the Philippines, Vietnam, and other regional players. This could lead to a new regional security arrangement in which a multipolar web of alliances supplants the traditional, U.S.–led “hub-and-spoke network” of alliances.

It is also possible that Japan’s apparent commitment to providing allies with military assistance could lead to a profound “perceptions gap” between the United States and Japan. The new defense bills lead the United States to believe that the SDF will be willing to provide logistical support to U.S. forces in risky situations. However, as Japan faces deflation and a dwindling GDP, it is possible that Japanese enthusiasm for foreign assistance will soon wane. In a recent address regarding Japan’s economic situation, Prime Minister Shinzo Abe declared, “Japan cannot drastically increase its defense spending, but we can still ensure that the Japan-U.S. security alliance will function better.” Abe’s words attempt to strike a precarious balance between addressing domestic needs and upholding international commitments to the United States. In the event of prolonged economic stagnation or domestic unrest, Japan could falter in its promise to assist global allies. Therefore, while Japan appears committed to contributing toward U.S.–Japan joint military ventures, there is reason to suspect that Japanese contributions will not meet U.S. expectations.

Moreover, as Japan modernizes its military and begins to play a larger role in the Asia-Pacific security environment, the United States must consider the possibility of a nuclear Japan. The United States’ “nuclear umbrella” has sheltered Japan and eliminated the need for Japan to develop its own nuclear program thus far. As Japan looks toward potential threats stemming from its hostile neighbors (such as North Korea, China, and Russia) it is conceivable that its leaders may feel compelled to establish the nation’s nuclear presence. According to a senior Japanese government official, Japan has possessed the ability to build nuclear weapons since it constructed a plutonium breeder reactor and a uranium enrichment plant thirty years ago. Some of the more hawkish factions within Japan’s government boast that their nation could practically develop a nuclear weapon “overnight.” How should the United States handle a nuclear Japan? How will the introduction of a nuclear Japan alter the Asia-Pacific security landscape? These contingencies could potentially upset an already delicate regional power balance.

The Ugly: War with China and U.S. Response

Reinvigorated Japanese influence in the Asia-Pacific could lead its policymakers to approve risky military ventures. The author of a May 2015 editorial in The Asahi Shimbun fears that Japan could end up saddling itself with the strain of serving as a guarantor for regional security. Once Japan takes the first step toward military operations in armed conflicts, it could quickly become entangled in small flashpoints in the Asia-Pacific. Some Japanese commentators cite concerning loopholes in the new security bills as an indication that Japan’s security reforms could lead the nation down a radical path. According to commentators, those loopholes could afford Prime Minister Shinzo Abe and the LDP-Komeito coalition enough leeway to push Japan into more expansive military commitments than originally envisioned by the bills’ supporters.