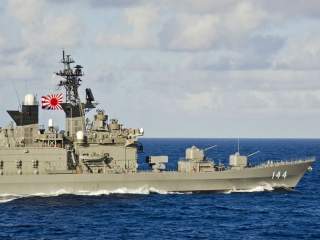 China’s growing naval activism in the East China Sea has inevitably sparked reaction from Japan, as Tokyo is busy raising a defensive wall along its southern flank, coinciding with one of the most vulnerable sections of the so-called first island chain, to control and deter possible aggressive moves by the Chinese navy.

On the heels of new security legislation allowing Japan’s Self-Defense Forces to engage in armed conflicts overseas for the first time since the end of World War II, evidence is mounting that Tokyo is intent on closing in on China through a variety of ISR (intelligence, surveillance and reconnaissance) and antimissile facilities. Key to this strategy is the militarization of the Nansei Island Chain, Japan’s southernmost territories, which includes the prefectures of Okinawa and Kagoshima.

In late March, Japan’s Ground Self-Defense Force (GSDF) opened a radar installation on Yonaguni Island, near Taiwan’s eastern seaboard and the Senkaku/Diaoyu Islands, administered by Tokyo but claimed by China (and Taiwan). The new GSDF surveillance station is expected to monitor Beijing’s activities in the East China Sea and, possibly, the northern sector of the South China Sea, where China is locked in territorial disputes with a string of neighbors that receive support from the United States and Japan.

The intelligence-gathering post on Yonaguni has also the potential to be used for military operations, and is part of Japan’s plan to activate a series of coastal and amphibious security units on the country’s southwestern islands. It is worth noting that Tokyo’s militarization of the Nansei Islands goes hand in hand with the strengthening of the country’s coast guard. Indeed, on April 16, the Japan Coast Guard launched a special unit of twelve large ships to patrol waters in the East China Sea around the Senkakus/Diaoyus, in an evident response to the China Coast Guard’s decision to assign its giant new patrol vessel, the CCG 2901, to its eastern division, which monitors the disputed area.

In addition to increasing the number of listening posts to intercept Chinese communications in the mainland and surrounding waters, Tokyo intends to reinforce its anti-missile system by 2020. The Japanese military plans to upgrade two of its six Aegis ships, so that all will be equipped with SM-3 interceptors, and construct two more. Tokyo is also interested in buying the Terminal High Altitude Area Defense (THAAD), the U.S. missile interceptor system; by adding the THAAD unit to shipborne SM-3 interceptors and the land-based PAC-3 Patriot rockets, Japan would set up a three-tier ballistic defense against any potential enemy.

Japan’s recent military steps in the East China Sea should be seen in combination with the United States’ moves, including Washington’s design to deploy a THAAD system in South Korea amid vehement Chinese opposition. Beijing fears that the presence of one or more THAAD batteries on the South Korean soil, apparently in response to North Korea’s latest nuclear and rocket tests, could limit its strategic deterrence capabilities, as the U.S. antimissile system includes radar with a range extending far beyond the Korean peninsula into the Chinese territory.

The functioning radar station on Yonaguni and the eventual THAAD unit in South Korea appear to be, respectively, the southern and northern tips of a prospective geostrategic barrier that Tokyo and Washington aim to build to prevent Beijing from projecting power beyond the East China Sea—as the Nansei Islands could also work as a springboard for attacks on the Chinese mainland in case of war. It is doubtful that Beijing will ignore it, meaning that the ongoing process of militarization and countermilitarization in East Asia is bound to escalate, to the detriment of what Yoichi Funabashi calls “the coast guard-maintained peace” across the region, namely the preservation of the status quo around the Senkaku/Diaoyu Islands through law enforcement operations conducted by both nations’ coast guards.

Emanuele Scimia is a journalist and foreign policy analyst. He is a contributing writer to the South China Morning Post and the Jamestown Foundation’s Eurasia Daily Monitor. In the past, his articles have also appeared in Deutsche Welle, World Politics Review, Asia Times, The Jerusalem Post and the EUobserver, among others.