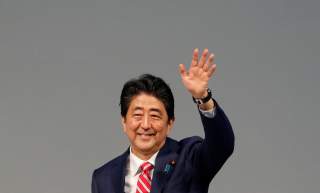 Abe’s gamble to call an election more than a year earlier than scheduled paid off handsomely, despite pre-election polls showing a slide in his Cabinet’s approval rating and the threat posed by Tokyo governor Yuriko Koike’s new party, Hope.

Campaigning on a platform of taking a strong stance against North Korea’s nuclear threat as well as constitutional and economic reform, Abe saw off his political rivals with another lower-house landslide, his fifth electoral victory since regaining the top job in 2012.

Abe’s success makes him likely to secure another three-year term as Liberal Democratic Party president next September, which would keep the sixty-three-year-old Tokyo native in office into the next decade and make him the nation’s longest serving postwar leader.

The only rain on Abe’s parade came from Typhoon Lan, which helped reduce voter turnout to below 54 percent, the second-lowest turnout since World War II.

As a result, Abe told national broadcaster NHK that he would “continue to work humbly and sincerely to achieve results,” recognizing the “harsh views” still held by many toward the ruling coalition.

The prime minister also indicated that any move to amend Japan’s constitution would not be rushed, despite his long-held ambition.

“Although the ruling coalition gained more than two-thirds of the seats, there is a need to create a wide-ranging consensus that goes beyond just the ruling parties,” Abe said Monday.

“We will make the effort to obtain the majority in a national referendum [needed to pass an amendment].”

The nation’s top law was written during the Occupation and has not been amended since, despite its insistence under Article 9 that Japan will never maintain any “land, sea, and air forces, as well as any other war potential.”

According to Japan’s Nikkei, the Liberal Democratic Party may start discussions on a constitutional revision proposal as early as next month, with plans to submit legislation to next year’s ordinary session of parliament, the Diet. The party aims to insert constitutional recognition for the Self-Defense Forces, as well as guaranteeing free education, among other changes.

Nevertheless, reforming the constitution is no easy process. It requires two-thirds support from both Diet chambers for a national referendum bill, followed by a simple majority in the poll.

Opinion polls suggest the Japanese public is yet to be convinced of the merits of changing the top law, however. A recent poll published by the left-wing Asahi newspaper suggested 55 percent opposition to any change.

The party’s coalition partner, Komeito, has also insisted on more wide-ranging discussions that may further delay any change, preventing Abe realizing his ambition of having a revised constitution in place for the 2020 Tokyo Olympics.

Abe also pledged to exert even “stronger pressure” on Pyongyang, and “dramatically show countermeasures against the North Korean threat.”

“I will make sure the Japanese public is safe and safeguard our nation,” he said.

North Korea has threatened to sink Japan with its nuclear weapons, saying “Japan is no longer needed to exist near us.” America has not been spared the hermit kingdom’s rhetoric either, with Pyongyang vowing to “reduce the U.S. mainland into ashes and darkness.”

President Trump reportedly called Abe to congratulate him on his election win, emphasizing the importance of a “free and open Indo-Pacific region, and a strong U.S.-Japan alliance.”

Trump is scheduled to visit Japan for three days starting November 5, with Monday’s statement suggesting the two democratically elected leaders will focus on issues including the South China Sea as well as Pyongyang’s nuclear-weapons program.

Abe is also set to host a meeting between Trump and families of Japanese nationals abducted by North Korean agents in the 1970s and 1980s—an issue that has strained relations between Tokyo and Pyongyang.

As well as security matters, Trump may also push a bilateral-trade deal with Japan aimed at reducing the U.S. trade deficit. According to the United States Trade Representative, the U.S. goods and services trade deficit with Japan totaled nearly $55 billion in 2016, although the United States enjoyed a services trade surplus of around $14 billion.

In the second round of bilateral economic talks held earlier this month, U.S. negotiators reportedly “expressed strong interest in [a] U.S.-Japan [free trade agreement]” as well as voicing “interest in ways to cut the U.S. trade deficit” with Japan, Reuters reported.

However, Japan thus far has resisted a bilateral pact, preferring instead a multilateral deal such as under the Trans-Pacific Partnership agreement, which Trump withdrew from earlier withdrew this year.

Nevertheless, U.S. exports to Japan should benefit from a stronger Japanese economy. Abe’s victory should see a continuation of his “Abenomics” policies of fiscal and monetary stimulus and pro-growth structural reforms, with the Bank of Japan likely to maintain its ultra-easy quantitative easing program.

Abenomics will also get a reboot, aided by a planned two trillion yen ($17.6 billion) spending package on childcare and education, with other measures aimed at boosting productivity and revitalizing the region.

“The most important thing for the financial markets is Prime Minister Abe’s continuity, and continued quantitative easing by the Bank of Japan. Abe will choose the next BoJ governor in March 2018, and so continuous easing is still expected,” said Nikko Asset Management’s chief strategist, Naoki Kamiyama.

“Parliament is not a zero-sum game. If at all, ‘Team Abe’ knows full well that constitutional reform can only happened if the Japanese people support it—a national referendum has to be called within six months of parliament approval,” Koll said in a research note.

“So it is imperative for ‘Team Abe’ to remain focused on the creation of pro-growth, pro-business policies. Without a broader feel-good factor amongst the people, any constitutional referendum is poised to be defeated.”

For the United States, a stronger relationship with its key Pacific ally is secured thanks to another Liberal Democratic Party election triumph. Trump and Abe will have plenty to talk about.