Japan's Master Plan to Defeat China in a War 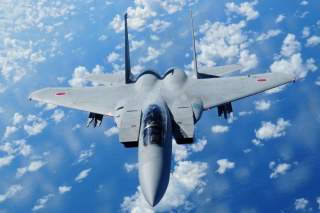 In recent years, significant attention has been paid to the People’s Liberation Army Navy (PLAN). China’s defense budget, which has increased ten fold in the last twenty five years, has funded the construction of a modern, ocean-going navy. This includes the recently fielded aircraft carrier, Liaoning, as well as fleets of destroyers, frigates, corvettes, replenishment ships, and amphibious assault ships.

The PLAN is indeed an impressive force, but local geography will create challenges during wartime. Japan controls a string of islands that form the Miyako Strait, which Chinese naval forces must transit to enter the western Pacific. Properly fortified, the Japanese-held Ryukyu Islands could conceivably block passage of the Strait altogether.

The Ryukyus have been used to defend Japan before. Okinawa, the gateway to the Home Islands, was fortified by Japan during World War II and then invaded by the Allies. The southern half of the chain, the Sakashima Islands, were used as staging areas for kamikaze fighters during the Battle of Okinawa.

Japan, which spends roughly a quarter as much on defense as China, could use the Ryukyus to execute an Anti-Access, Area Denial (A2/AD) plan in the Miyako Strait. Like any good A2/AD strategy, such a plan in the Strait would require a fraction of the spending necessary to overcome it.

Together, the North and East Sea Fleets field 16 destroyers, 32 frigates, all five of China’s nuclear attack submarines, and around 40 diesel electric submarines of varying ages. Backing this up would be aircraft of the People’s Liberation Army Air Force (PLAAF), the People’s Liberation Army Navy Air Force and the conventionally armed ballistic missiles of the Second Artillery Corps.

The most direct route for both fleets is the Miyako Strait, a gateway formed by Japan’s Sakishima Islands. A gap 160 miles wide between Miyako Island and the island of Okinawa provides access to the open Pacific and beyond. Chinese naval task forces have recently made a habit of passing through the strait.

It’s difficult to accurately predict a conflict between China and Japan, but in many scenarios China will have to force the Miyako Strait. Japan thus has the advantage of preparing the battlefield, as well as being able to deploy a multi-layered network of sensors and weapons.

The radar network consisting of AN/TPY-2 radars would stand guard against ballistic missile attacks by the Second Artillery Corps. This would be backed up by the Japan Maritime Self Defense Force’s (MSDF) BMD-capable cruisers and destroyers, of which there are currently four. Patriot PAC-2 and PAC-3 interceptors would provide point defense against aircraft and ballistic missiles, respectively.

Finally, although not currently in operation, Japan could deploy an array of hydrophones across the Strait similar to the SOSUS network that covered the Greenland-Iceland-United Kingdom gap during the Cold War. The system would enable Japan to monitor Chinese submarines in peacetime, and efficiently eliminate them during wartime.

The Japanese commander charged with defense of the Ryukyus would take the information from aerial, land, sea and subsea sensors and piece together a coherent picture of the battlefield. The commander could then use this intelligence to preserve his own forces while striking at Chinese forces where they are weak, both technically and professionally.

(Recommended: A Nuclear Nightmare: If China and Japan Went to War)

Japan’s fleet of 16 submarines, in the process of being increased to 22, will be the most effective active defense. The JMSDF submarine fleet, composed of the newer Soryu and older Oyashio-class diesel electric submarines, is one of the most professional and technologically advanced in the world. The idea would be to direct Japan’s strength in submarine warfare against Chinese weaknesses in anti-submarine warfare (ASW).

Assuming a wartime surge of 11 JMSDF submarines, with a handful to watch the northern frontier with Russia, Japan could form a picket of eight submarines. Operating on a front from Taiwan to the southern Japanese island of Kyushu, the Chinese Navy would need to anticipate an average of one Japanese submarine every 82 miles, an unpleasant prospect.

Aircraft will also play a key role, and the aircraft of the Japan Air Self Defense Force (ASDF) and MSDF would also contribute heavily to the fight. Operating from Okinawa and Kyushu, Japan’s fleet of E-767 and E-2D early warning aircraft would detect enemy aircraft and direct the air battle. F-15J fighters would be vectored to intercept Chinese fighter sweeps. The F-15Js would also be tasked with destroying China’s airborne early warning and tanker aircraft, seriously degrading the People’s Liberation Army Air Force’s ability to operate over Japanese territory.

Japanese airfield space supporting the Ryukyus is limited, and a priority would be placed on F-15Js and their air superiority capability. Backing them up from bases farther away on mainland Japan would be the JASDF’s F-2 fighters, recently upgraded to carry medium range AAM-4B radar-guided air to air missiles. The F-2s could also conduct anti-ship missions with Type 93 anti-ship missiles, likely in conjunction with attacks from submarines and surface ships.

The MSDF’s patrol aircraft, the new Kawasaki P-1 and the older P-3C Orion will conduct reconnaissance and hunt Chinese submarines. Japan has over 90 P-3Cs and a handful of P-1s.

In the event of war, the MSDF would organize at least two surface task forces centered around its Hyuga and Izumo class helicopter carriers. Each carrier will be equipped with at least six anti-submarine warfare helicopters, allowing it to hunt Chinese submarines over a wide area. Each would be protected by an Aegis destroyer of the Kongo or Atago classes. Other task forces would be centered around an Aegis destroyer and charged with providing area defense against conventionally armed ballistic missiles.

To support the A2/AD plan, Japan could organize a fleet of “street fighters”, the 200-ton guided missile patrol boats of the Hayabusa class. The six Hayabusa class ships are each armed with four SSM-1B anti-ship missiles, roughly equivalent to the American Harpoon missile, and are capable of speeds of up to 46 knots. The Hayabusas could mount hit and run attacks on Chinese ships, hiding out among the Sakishima Islands between raids.

Finally, Type-88 land-based anti-ship missiles will keep Chinese forces at bay, preventing landings on the islands of Miyakojima, Ishigakijima, and even Okinawa. Not only will these missiles protect populated islands, they will shape the battlefield, creating zones where Chinese ships will have to worry about multiple threats. A mobile system, the Type 88 would be a difficult threat for China to neutralize.

Japan has several batteries of Type 88-missiles, which mount six missiles per transporter truck. The Type-88 has a range of nearly 100 miles, meaning that missiles mounted on Miyakojima and Okinawa would overlap in range, completely covering the strait. Theoretically, there are enough populated islands to target Chinese ships with land-based anti-ship missiles all the way from Taiwan to Kyushu. Notably, in recent years Japan has held exercises that utilized Type-88 missiles near the Strait.

It’s worth noting that Joint operations will be critical for any JSDF A2/AD campaign. In the past, Japanese military forces have been notoriously parochial, duplicating capability, withholding intelligence from other branches and preventing effective unity of command. In our scenario, the joint forces commander will be directing air, land and sea forces toward a common goal.

In that regard, the joint forces commander will need to be able to communicate with his forces by secure means. Without the ability to receive information and pass orders over vast distances, the Japanese defense would proceed in piecemeal and be defeated in such. Adopting a modern digital communications system like the U.S. standard Link 16 will help ensure communications even in the face of Chinese electronic jamming.

Nonetheless, most of the systems to support this strategy are already in place. Others, such as a SOSUS network for the Ryukyus, secure digital communications, and joint operations proficiency are easily attainable and not terribly expensive. Still other improvements, such as the XASM-3 hypersonic anti-ship missile, the F-35 Joint Strike Fighter, and more Aegis destroyers are already on the way.

Japan’s A2/AD plan would be the strategic equivalent of aikido, the Japanese martial art that emphasizes self defense. Aikido emphasizes turning the enemy’s strength and momentum against himself. Similarly, the SDF would draw the enemy out into the Ryukyus, away from its land-based power, where it could be defeated. Such a strategy is more in tune with the Japanese public’s pacifist tendencies and an easier sell politically.