Japan's Southwest Pivot: How Tokyo Can Expand Its Eyes and Ears in the Ocean 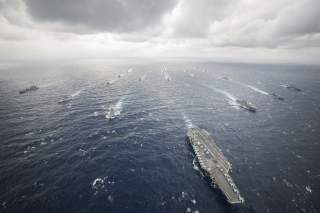 Amid uncertainty over the U.S. pivot to Asia under the current Trump administration, other key players in the Indo-Pacific continue about their own equivalent policies of regional engagement. India’s “Act East” policy of engaging with countries east of the Malacca Strait, especially Southeast Asian countries, continues apace. Meanwhile, Japan under Prime Minister Shinzo Abe has been going about with its southwest pivot. Earlier, there had been reports about Tokyo conceiving the Vientiane Vision—a grand blueprint that outlines the scope and extent to which Japan would engage with Southeast Asian countries in the defense and security realm.

Japanese defense officials have said that the Vientiane Vision remains a preliminary work in progress; discussions are still ongoing with their Southeast Asian counterparts to “concretize” projects of interest. Without a doubt, maritime security capacity-building assistance features high on the agenda. Abe’s southwest pivot to South and Southeast Asia countries thus carries a distinctly maritime flavor. The 2015 iteration of Tokyo’s Official Development Assistance plan also highlighted the need to assist in building maritime safety capacities of these envisaged partner states.

To be certain, China’s more muscular forays in the Indo-Pacific—growing assertiveness in the East and South China Seas, as well as expanding footprints in the Indian Ocean—constitute one of the key motivations for this southwest pivot. Unlike his predecessors, Abe has been keen to backup his words with monetary investments. He has been pushing for practical initiatives designed to build maritime safety and security capacities of those countries in need. And more than a mere coincidence, some of these recipient governments do have their own contention with Beijing; recently, Tokyo has delivered used and new-build patrol vessels to the Philippines and Vietnam—Beijing’s primary South China Sea rivals.

Beyond surface-patrol assets, Japan has lately expanded the repertoire of capacity-building assistance to include aerial assets for promoting maritime domain awareness (MDA).

The most recent example has been the lease of five Maritime Self-Defense Force (MSDF) TC-90 turboprop-driven planes to the Philippines. In fact, the Japanese TC-90, which is a local derivative of the Beechcraft King Air (with a maritime patrol version currently in service with the Malaysians), is not specifically designed for MDA, but for training purposes. Unlike the P-3C Orion maritime patrol and reconnaissance aircraft, the smaller TC-90 is handicapped by range, endurance and payload capacity. Nonetheless, it is still far superior to the antiquated Britten-Norman Islander aircraft the Filipinos had been deploying for MDA tasks. To compound the qualitative problems of the Islander airplanes, the Philippine Naval Air Group does not even have enough of the machines to cover its entire archipelago. At best, the operational readiness of the Islander airplanes has been dubious, notwithstanding the practice of cannibalizing parts from existing airframes to keep at least one flyable.

Therefore, the arrival of the TC-90s has been timely, and serves at least as an interim, stop-gap measure to arrest the atrophy faced by the Naval Air Group. Moreover, even though the Philippines under President Rodrigo Duterte has been on an upswing of relations with Beijing, there is clearly no room for complacency. While China comes showering Manila with generous investment pledges and financial grants, Beijing is reportedly up to something in the South China Sea. In middle of March this year, Philippine defense authorities highlighted China’s purported plans to construct facilities on the Scarborough Shoal, notwithstanding the modus vivendi struck by Manila and Beijing over the disputed feature last year.

And to top it off, the perceived Chinese encroachment into Philippine waters of national interest has gone further eastward—to the resource-rich Benham Rise east of the Philippine archipelago, on which Manila possesses sovereign rights as mandated by the United Nations. Following reported passages by Chinese survey vessels in the said area, and facing no small amount of domestic pressure to act decisively, the Duterte administration has ordered the Philippine Navy to conduct patrols to assert the country’s sovereign rights to Benham Rise.

The same day as the first pair of TC-90s arrived in the Philippines, Armed Forces of the Philippines Chief-of-Staff General Eduardo Año remarked that the planes would be deployed to monitor the South China Sea and Benham Rise. At a cost of $28,000 per year, the lease certainly provides an attractive proposition to Manila. The TC-90s would extend the Philippines’ limited shore-based radar coverage, fronted first and foremost by its National Coast Watch System, further into areas of concern. While no panacea to its significant MDA shortfalls, the Japanese planes would at least give Manila more policy options to cope with foreign predation upon its maritime interests, be it in the Spratlys or Benham Rise.

Moreover, building aerial MDA capacity serves some practical benefits for both Japan and the recipients. Suffice it to say, most of the Southeast Asian countries continue to endure capacity shortfalls when it comes to surface assets for surveillance and enforcement purposes. Patrol vessels, especially newbuilds, could be costly to acquire in the requisite quantity. Moreover, hulls take time to construct; and more personnel for crewing requirements. MDA is obviously as critical as acquiring physical enforcement assets. Referring to Malaysia’s maritime security capacity building, Shahriman Lockman aptly observed that “equipment that contributes to maritime domain awareness ought to be the priority for all. You can't fight what you can't see.”

A way to plug MDA gaps would be to complement surface assets with suitable numbers of maritime patrol and reconnaissance aircraft. Until recent years, that area was neglected when compared to more exotic capabilities, such as submarines, surface combatants and missiles that Southeast Asian navies have been enthusiastically snapping up so long they could afford them.

Operationally, aerial MDA would not only extend surface coverage, but it could more effectively monitor larger swathes of waters at any one time, since shipborne radars tend to also be limited by line of sight and the horizon. One could argue that operating a plane would be costlier than a patrol vessel. Also, the airframe would have only a few hours worth of flight endurance whereas a patrol vessel would be able to stay on station for days. But having aerial MDA offers the unrivaled advantage of quick response, especially in an emergency.

Consider what happened back in March 2014 when the Malaysian Airlines MH370 passenger jet went missing—maritime patrol and reconnaissance aircraft were the first responders and carried out the bulk of search-and-locate missions. Such planes are also useful in the immediate aftermath of a natural calamity; U.S. Navy P-3Cs conducted search-and-rescue missions following Super Typhoon Haiyan in the Philippines back in November 2013, transmitting valuable data for the planning of follow-on disaster relief operations.

Turning back to the context of maritime disputes where sovereignty assertion and enforcement constitutes a daily mission for countries like the Philippines, aerial MDA provides vital information in support of surface operations. During the Sino-Philippine standoff in 2014 over the Second Thomas Shoal, the presence of American maritime patrol and reconnaissance aircraft reportedly helped the Filipino resupply mission get past the Chinese coastguard blockade and reach the Philippine Marine Corps squad garrisoned on board the grounded landing ship BRP Sierra Madre. Aerial MDA hence serves as a form of deterrent capability during such contingencies.

With a sizeable fleet of aircraft that could be utilized for MDA, from low-capability airframes such as the TC-90 to high-capability counterparts such as the P-3C Orion, Japan has ample opportunities to broaden capacity-building assistances to Indo-Pacific partners in this area. For years, Tokyo has eyed exporting used P-3Cs to countries such as Vietnam and Sri Lanka—countries with outstanding MDA requirements yet without the financial ability to afford newbuild maritime patrol and reconnaissance aircraft. Hanoi for example was reportedly first keen to acquire used U.S. Navy, and subsequently MSDF P-3s.

With the range of low- to high-capability airframes for MDA available at its disposal, Japan could tailor capacity-building assistances according to the recipient’s needs and capabilities. Back in 2015, Manila expressed interest in acquiring used P-3Cs from Japan. However, this was scaled down to TC-90s later the same year. There were several plausible reasons for that. First, absorbing such technologically complex aircraft as the P-3Cs would be challenging for the Filipinos who have never operated anything close to this plane’s level of sophistication. Second, according to one Japanese defense official, the MSDF still must cope with its own aerial MDA needs, considering two factors.

One, the growing Chinese maritime activities in and around the East China Sea that necessitate higher operational tempo for Japan’s maritime patrol and reconnaissance aircraft fleet—in both the MSDF and Japan Coast Guard. Second, at a hefty price tag of $140.8 million per plane the indigenously developed Mitsubishi P-1 is extremely expensive to procure within a short time span in sufficient quantity to replace the P-3s. Consider that, as per what was stated in the latest Military Balance 2017 published by the International Institute for Strategic Studies, the MSDF currently possesses sixty-six P-3Cs and only nine P-1s. It would require quite some time to fully replace all P-3s. This only means that, for Tokyo to maintain its MDA operational tempo, the bulk of the ageing P-3 fleet must soldier on for some time before they could be freed up for transfer to foreign partners such as the Philippines, Vietnam and Sri Lanka.