Jared Kushner Is In Over His Head 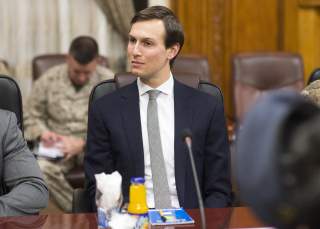 That he now finds himself enmeshed in a scandal involving contacts with Russia that, from all indications outlined in a glut of press reporting, he appears to have sought outside official channels—indeed, behind the back of the Obama administration—should therefore come as no surprise.

Kushner is still operating very much over his head. It is true that he has forged what appears to be a friendly relationship with Saudi Arabia’s Crown Prince Mohammed bin Salman. How far that relationship will carry either of them remains an open question, however. Because Kushner has made it clear that he will not deal with the messiness that defines congressional relations, he will not be the point person to ensure that Congress approves the massive arms-sales deal that was announced during the president’s visit to Riyadh. In any event, a sizable part of that deal was already in the works under the Obama administration and, with respect to naval modernization, had already been discussed while George W. Bush still sat in the White House.

Even less resulted from the Trump visit to Israel and Palestine, the next stop on the presidential trip, although Kushner is meant to be the man who, according to his father-in-law, will at long last bring peace to the Middle East by resolving the Israeli-Palestinian dispute. As for Kushner’s third stop on the presidential tour, in Rome to meet Pope Francis, all that resulted from that meeting was the widespread indignation at the fact that Kushner and his wife Ivanka, both Orthodox Jews, participated in the meeting with the pontiff, while Sean Spicer, a religious Catholic who attends mass every Sunday, was excluded.

Were I, also an Orthodox Jew, in Kushner’s place, I would have quickly conceded my spot in the papal audience to Spicer, recognizing that for him a meeting with the pope was not only a once-in-a-lifetime opportunity but a moving religious experience of the first order. In not doing so, Kushner probably alienated not only Spicer, but many others in the White House and outside it who rightly felt that the president’s spokesman and sometime media whipping boy deserved the right to be blessed by the man he considers his church’s holy father.

All the same, the naïveté, ineffectiveness and insensitivity that Kushner demonstrated on his trip with the president pales before the sheer stupidity of reportedly requesting a direct line to Vladimir Putin that somehow would escape the notice of the intelligence community. Even a reader of spy novels, much less of newspapers, would have been aware that the American government has the ability to monitor terrorist activities and is therefore likely to have the means to track those of potentially hostile countries as well. Kushner did not need, nor had the need, whether during or after the presidential transition, to know what those means are. But to have been unaware that they might have existed is simply astounding.

The ongoing investigation of possible contacts between the Trump campaign and the Russians will ultimately reveal whether, as seems to be the case, Kushner requested a back channel to the Kremlin, and the reason for that request. Until that investigation is concluded, however, Kushner will remain under a cloud. That is not a position for a man acting in effect as the president’s prime minister should be in. It undermines not only his own reputation, but also the administration’s effectiveness and the nation’s well-being.

Kushner should recognize that he does not belong in Washington, where he is doing little good. Instead, he should return to his current New York residence and to his real-estate business, where a long and potentially successful future awaits him.

Image: Jared Kushner sits in on a meeting at the Ministry of Defense in Baghdad. Flickr/Chairman of the Joint Chiefs of Staff