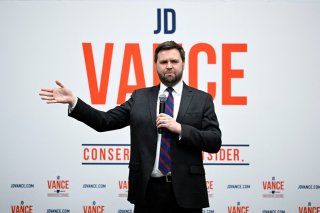 “I think it’s ridiculous that we are focused on this border in Ukraine. I got to be honest with you, I don’t really care what happens to Ukraine one way or the other,” said James David Vance, the winner of the Ohio Republican primary and senatorial candidate. Vance added that “what explains both the Russia hawkishness and the dereliction of duty at the border is this: elites don’t care if my neighbors die. Fentanyl coming across the border kills people I care about. Declaring the cartels a terrorist org would do more for them than a Ukraine war.” Vance was quickly written off by the pundit class, with the New York Magazine going so far as to claim that Vance's apathy towards Ukraine is backfiring and that he is dangerously off base and tone-deaf about foreign policy. It was an echo of the criticism of Donald Trump during his 2015 campaign in South Carolina, where he went on to say how the Iraq War was a stupid mistake. Vance's opponent Josh Mandel had the backing of Bill Kristol and Mark Levin. Vance, of course, won.

Vance was prominent in bucking the foreign policy pressure as a candidate. The Russo-Ukrainian War so far divided the America First movement into true believers and conservative-realists versus those who coopted the Trumpian agenda during his time in power but reverted back to a traditional hawkish and internationalist policy the moment the “current thing” started. To claim that America doesn’t care about Ukraine goes against established norms of traditional electoral propriety. Realpolitik often dictates amoral decisions, but post-World War II consensus has always been to couch that under a more benign rhetoric.

To speak in such stark language of narrow national interest, of privileging national borders over humanitarian concerns abroad harkens back to an older prewar conservatism. Tucker Carlson provided the rhetorical muscle to it, as did a flurry of new magazines, and new-right opinion-makers. Senator Josh Hawley in the early days also sought clarity in a letter to Secretary Antony Blinken about the government’s position on antagonizing Russia in Ukraine and hinted that the United States would do better to focus on China. But no one spoke about the issue quite so in the way Vance outlined. His win indicates that the Republican establishment still fails to comprehend or appreciate their changed party. Others should take note and change their tactics accordingly.

Vance was prudent enough to highlight the disconnect between the elite obsession with foreign crusades with their total detachment from American maladies. This is important, as the foreign policy elite views are shaped at universities, which are overwhelmingly dominated by liberal-internationalist theology, where women’s rights in Ukraine or Afghanistan is a much greater concern than fentanyl addiction in the United States. Foreign policy and domestic policy are connected, especially the school to NGOcracy pipeline, which is often overlooked. The activism which leads to an interventionist foreign policy is funded, formed, and nurtured in elite university departments. While I am not privy to Vance’s war room, his speeches indicate that he understood that connection.

It is commonsensical that Americans would care more about their own border with Mexico, mass migration, gang violence, and drugs than about Ukraine’s border with Russia. One does not need to be a student of international relations to acknowledge that Ukraine, while a humanitarian crisis, is a far greater issue for a rich Europe, than the United States spending billions of tax dollars, money that could have been better spent on fortifying America’s southern frontier. Vance’s bravery was that he took the risk during the election year, and was rewarded for it. With corporate America rethinking activism after a full-spectrum broadside by Governor Ron DeSantis, and the Supreme Court poised to relitigate abortion and state rights in the United States, Vance’s win is yet another sign that the GOP is transforming itself in an age of reaction.