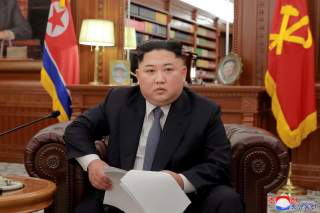 Each year, Kim Jong Un gives an address on New Year’s day. On the first day of 2017, Kim signaled the ICBM test that was to come. And on the first day of 2018, he hinted at the diplomatic thaw that would bring “love letters” and a finger-heart. So what does 2019 have in store for us?

Ultimately, there were few surprises in the speech. The first half of the speech was dedicated to the economy, just as much of North Korea’s propaganda has been since Singapore. (One interesting wrinkle is a renewed commitment to nuclear energy.) And when Kim turned to the issues of peace on the Korean peninsula and the stalled negotiations with the United States over denuclearization, he reiterated the line that we have seen from Pyongyang in recent months: Positive words about the transformation of relations with South Korea, but growing impatience with Trump.

This year, the address was delivered on television, apparently pre-recorded, with Kim sitting in a comfortable chair and speaking for about thirty minutes. A number of reporters, including Motoko Rich at the New York Times, live-tweeted translation. North Korea has now published the full text of the address, about 5,000 words long, in the Rodong Sinmun. KCNA has also published a brief 900-word summary in English which helps identify the most important bits.

Our interpretation of the speech is necessarily incomplete as Kim has also sent a pair of messages to South Korean President Moon Jae-in and U.S. President Donald Trump. The text of these communication has not been made public. Moon described his letter as containing a “positive message.” Trump has not mentioned his letter at all. U.S. and South Korean officials are interpreting the speech in light of these private communications, a luxury we do not have.

Kim was extremely positive about the changes in the relationship with South Korea, praising the three agreements signed with Moon Jae-in—the Panmunjom Declaration, the September Pyongyang Joint Declaration, and the North-South military agreement—as well as the warm feelings that marked the Winter Olympics.

Kim, though, pivoted in this discussion to a denunciation of South Korean military exercises “with foreign forces” as “the source of [the aggravated] situation on the Korean peninsula.” And he called for an end to “the introduction of war equipment including strategic assets from outside.” Kim then struck a nationalist note, painting those in South Korea who might favor the alliance with the United States as unpatriotic, suggesting that all Koreans should be “conscious” that it is Koreans who are “the master of peace on the peninsula” and who should “never tolerate the interference and intervention of outside forces who stand in the way of national reconciliation, unity and reunification with the design to subordinate inter-Korean relations to their tastes and interests.”

These have been themes of North Korean propaganda throughout the year—praising Moon while criticizing his opponents as lackeys of the Americans and the Japanese. Certainly, among those concerned about the deteriorating state of relations between Seoul and Washington, these remarks will resemble a sharp wedge hammered into a deepening crack.

This is worth keeping in mind. For when Kim struck a reasonable tone on the state of negotiations with the United States, it was hard not to get the feeling that he was setting the narrative to make sure Trump takes the blame for what might come next.

A lot has been made of one passage in Kim’s speech where he describes North Korea as having agreed to a rather broad set of commitments not to make, test, use or spread nuclear weapons:

“Accordingly, we declared at home and abroad that we would neither make and test nuclear weapons any longer nor use and proliferate them, and we have taken various practical measures.”

This is the kind of passage that, in isolation, offers a glimmer of hope to those who might still believe that Kim will relinquish his nuclear weapons after all. And yet, in context, it is a rather more disappointing statement. It is not a new pledge, but rather Kim’s somewhat prejudicial characterization of the steps that North Korea has already taken or offered: to close the nuclear test site at Punggye-ri, to “dismantl[e] the high-thrust engine test site” at Tongchang-ri (Sohae), and “the permanent destruction of the Nyongbyon nuclear facility if the United States takes corresponding actions…”

North Korea has consistently exaggerated the benefit of these steps—characterizing the dismantlement of the test site as “a physical verification of the suspension of ICBM manufacture” when it is nothing of the sort and describing the Yongbyon as a core facility for producing nuclear weapons while not acknowledging the existence of other sites. There is no surprise in Kim overstating what North Korea has offered—that is, after all, simply what one does in a negotiation. But Kim is framing North Korea as the reasonable party having made many concessions leaving Trump (or at least Trump’s staff) as the obstacle to peace on the Korean peninsula—and a foreign one, at that. If one is worried about decoupling between Seoul and Washington, one should be very concerned that Kim is positioning Trump to take the blame.

Kim made clear that he is willing to meet again with Trump—although again, he avoided the fact that it is North Korea that has rebuffed working-level discussions. But as other North Korea officials have warned since Singapore, his expectation is that the sanctions and military exercises will come to an end and that his patience is not infinite:

“But if the United States does not keep the promise it made in the eyes of the world, and out of miscalculation of our people’s patience, it attempts to unilaterally enforce something upon us and persists in imposing sanctions and pressure against our Republic, we may be compelled to find a new way for defending the sovereignty of the country and the supreme interests of the state and for achieving peace and stability of the Korean peninsula.”

As to what that new way would be, Kim did not say.

Jeffrey Lewis, PhD is a columnist for Foreign Policy, a scholar at the Middlebury Institute of International Studies at Monterey, and a research affiliate at the Stanford University Center for Security and International Cooperation. He is currently the publisher of ArmsControlWonk.com, the leading blog and podcast on disarmament, arms control, and nonproliferation.