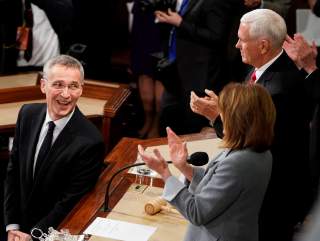 Invitations to address a joint session of the U.S. Congress are reserved for the most important American partners and allies. Francois Mitterrand, Margaret Thatcher, Nelson Mandela, Tony Blair, Queen Elizabeth II, Benjamin Netanyahu, King Abdullah II, and Emmanuel Macron have all been asked to deliver speeches at the lectern at one time or another. And lawmakers across the political aisle (with the notable exception of Netanyahu’s 2015 speech, where he directly lobbied Congress to kill any Iran nuclear deal the Obama administration wound up signing) have generally feted the speakers with platitudes, rowdy, bipartisan applause, and enough standing ovations to make your head spin.

Never before, however, was a NATO secretary-general asked to give an address to members of Congress. That ended today, when Jens Stoltenberg delivered a highly choreographed lecture about why a twentieth-century relic like NATO is still a relevant security body in a twenty-first-century world. The former Norwegian prime minister clearly understood who he was speaking to—and it wasn’t necessarily the lawmakers sitting in front of him clapping ferociously to every word that came out of his mouth.

Stoltenberg, of course, was trying to get through to the head honcho in the White House. He attempted to do this through a mix of flattery towards Donald Trump as the man who finally got those stingy Europeans to spend more money on their militaries; a history lesson to remind those in the room about NATO’s successful history as the slayer of the once-mighty Soviet Union; and by drilling home the message that the transatlantic security alliance serves the United States just as much as it serves Europe.

“Ever since the founding of NATO in 1949, every Congress, every American president, your men and women in uniform, and the people of the United States of America, have been staunch supporters of NATO,” Stoltenberg said. “America has been the backbone of our alliance.” It was the same, familiar theme the secretary-general used several days before he departed to Washington, when he told the press that the upcoming meetings were “an opportunity to celebrate seven decades of peace and prosperity for our nations. And it will be an opportunity to look to the future together.”

The future of the alliance, however, is precisely the problem. NATO is the proverbial, twenty-nine-nation zombie stumbling around like a headless chicken looking for new missions in order to stay in business for as long as it can.

There is no supranational structure in the world today—or perhaps ever—so beloved in Washington as NATO. Young scholars working their way up the food chain are taught to love the alliance with all their heart, to spare no energy in defending it from critics who are increasingly challenging the notion that NATO is anything other than the oldest and most successful military organization in history. In the Beltway, waxing sophomoric about the virtues and ideals NATO represents is as common as comparing resumes or leaking to the media. The assumptions underlying the alliance—that if it weren’t for NATO, Europe would either be overrun by the Russians or experience a back-to-the-future moment where German and French soldiers would be digging trenches in anticipation for another great European conflict—remain the same. And if one dares to question these sacred cows or boldly point out NATO’s structural flaws, well, then you must be on Vladimir Putin’s payroll or hate democracy.

To his credit, Stoltenberg didn’t avoid the elephant in the room. He brought up the fact that the transatlantic community is not one big, happy family. “We have to be frank,” Stoltenberg told lawmakers. “Questions are being asked on both sides of the Atlantic about the strength of our partnership. And, yes, there are differences.” Those differences include an alliance divided between the United States on one side and every other NATO member on the other, a vast majority of whom will be nowhere close to reaching the 2 percent of GDP mark on defense spending despite signing commitments to fulfill that very number in a decade. One doesn’t need to be an expert on European politics or defense to recognize the serious issues many European powers are failing to deal with. The Bundeswehr, to take the most extreme case, can’t even find enough tents and winter clothing for German soldiers who deploy to NATO’s eastern flank; the German army is a tangled mess with jets that can’t fly, tanks that can’t drive, and ships that can’t sail.

Much of this will be ignored during a week of celebrations around town. Who wants to talk about these pesky problems when we can instead clap, sing, and eat cake on NATO’s seventieth birthday?

At the same time, former U.S. ambassadors, European dignitaries, columnists, think tankers, and U.S. politicians repeat the well-worn refrain of NATO being the most successful military conglomerate in world history; central but uncomfortable questions will continue to be avoided. Is Europe finally turning a corner or will it continue to look to Uncle Sam as the first line of defense? With the Soviet Union a wasted corpse twenty-seven years after its death, what is NATO’s purpose? Is a revanchist but nonetheless economically stagnant Russia really interested (let alone capable) of invading the Baltics? And with so many other priorities on its desk, is it time for the United States to at the very least transfer more security responsibility for Europe to the Europeans?