Jerusalem Unrest Exposes the Brittleness of Israeli Sovereignty over Palestinians 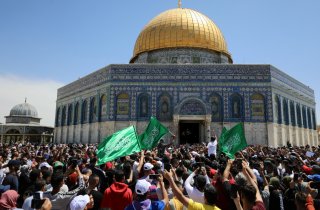 In December 2017, Donald Trump lent American recognition to Israel’s claims of exclusive sovereignty over Jerusalem. It was a high-point in a decades-long effort by Israel, beginning in 1967, to make the city its “undivided, eternal capital.” Yet for the 40 percent of the city’s residents who are Palestinian, and who have been crushed under the weight of that enterprise, there is only frustration with the denial and dispossession that accompanies it.

In recent weeks, unrest in Jerusalem has spread far and wide. What began as nightly protests by Palestinian youths facing violent repression from Israeli security forces is now on the verge of engulfing the entire country. It is a stark reminder that claims of sovereignty mean little when so many under it lack basic rights, and it is indicative of the emerging one-state reality in Israel-Palestine.

On Monday, in harrowing scenes reminiscent of the early days of the Second Intifada, Israeli security forces raided the holiest place in the city for Muslims and Jews—the Haram al-Sharif or Temple Mount—dispersing thousands of Muslim worshipers and pinning some inside the Al-Aqsa Mosque as they fired tear gas, stun grenades, and rubber-coated bullet. Hundreds of people were injured.

Over the past few days, large-scale demonstrations have broken out in cities throughout the occupied Palestinian Territories and inside Israel, where there have been unprecedented displays of Palestinian nationalism among Israel’s Arab citizens. Thousands of additional Israeli troops have been deployed to the West Bank in anticipation of further escalation. Gaza has come under a major aerial bombardment after militant groups began firing missiles into Israel, some reaching as far as the outskirts of Jerusalem, and killing three people. Israeli airstrikes on Gaza have leveled an entire fifteen-story building and damaged others, killing fifty-three people including fourteen children.

The causes of the latest unrest peel back like an onion. At the outer layer is what has unfolded over the past four weeks. On April 13, at the start of the month of Ramadan, the Jerusalem municipality decided to barricade the entrance of Damascus Gate, one of the few open spaces for Palestinian Jerusalemites to gather, and a popular meeting place among young people looking to socialize after a long day of fasting.

In defiance of the arbitrary restrictions, hundreds of Palestinian youths gathered at Damascus Gate. Israeli police and security forces responded violently, using brutal riot control measures, beatings, and arrests. As the protests and repression were repeated night after night, others were drawn in, including Palestinian citizens of Israel and ultra-right-wing Jewish groups and politicians hoping to fan the flames of ethnic and religious tension. On April 22, a Jewish supremacist group called Lehava rallied a huge mob of right-wing Jewish youths who marched through the streets chanting “death to Arabs” and “burn their villages” and assaulting vulnerable Palestinians. Finally, on April 25, the authorities decided to remove the barriers at Damascus Gate, giving the youth protesters a taste of victory.

While the demonstrations may have ended there, elsewhere in Jerusalem several Palestinian families were facing imminent, forcible expulsion from their homes in the neighborhood of Sheikh Jarrah. For decades, Palestinian families who were settled in the neighborhood by the United Nations and Jordanian government in the 1950s—after losing their homes inside what became Israel during the War of 1948—have been the target of settler groups seeking to displace them. Under a discriminatory Israeli legal framework designed to facilitate the displacement of Palestinians, courts began ordering the “evictions” of families in the 2000s. This week six more families were expecting Israel’s High Court to uphold orders against them.

Sheikh Jarrah has been a fixture of local activism in Jerusalem for years, occasionally garnering outside attention. This time, however, the coinciding of the events around Damascus Gate, the month of Ramadan, and the looming court order allowed the Sheikh Jarrah families to take advantage by hosting events and activities outside their homes to attract supporters. Each night, hundreds have gathered in solidarity and many more have been barred by Israeli police from joining. Once again, security forces cracked down on the gatherings with brute force, throwing stun grenades, spraying protesters with “skunk water,” and charging crowds on mounted horseback.

The Israeli government has tried to frame the issue as a “real-estate dispute” working its way through the courts. Fundamentally, however, Israel applies its own system of laws in East Jerusalem in contravention of international law, which considers East Jerusalem occupied territory. Still, the legal pretense and gradual pace have been key components of the state’s approach to evading significant international opprobrium for its actions. If there is major opposition today, why not wait a week, a month, a year until it blows over and then proceed?

On May 10, the day the High Court was expected to rule on the evictions, Israel’s attorney general stepped in and asked for a delay of up to thirty days while he reviewed the case—in what was likely an attempt to take the air out of the protests.

Peel back the onion further, however, and the broader policy of demographic engineering in Jerusalem becomes apparent. Since occupying the eastern part of the city in 1967, Israeli authorities have pursued urban planning through an ethno-nationalist lens in order to remake the city to justify their claims of exclusive sovereignty over the entirety of Jerusalem. According to Israeli human rights organization B’Tselem, Israel has “been working systematically to drive [Palestinians] out” of Jerusalem by utilizing policies that include the expropriation of private property, limitations on zoning and building permits, the demolition of homes, forcible displacements, and stripping almost 15,000 Palestinians of their residency status. Palestinian residents also pay taxes in the city without receiving adequate investment in their communities.

At the same time, Jerusalem residents are isolated from their compatriots in the West Bank and elsewhere, who are restricted from reaching the city by a matrix of checkpoints, settlements, a barrier wall, and a permit regime.

Despite it all, Israel has failed to curtail the growth of the Palestinian population in Jerusalem. But it has succeeded in creating overcrowded ghettos lacking in jobs and infrastructure. Jerusalem, today, is a city of deep inequity, discrimination, and injustice, which makes it also a wellspring of resentment, frustration, and anger.

It is unsurprising then that an arbitrary measure like closing off a public space, or adding metal detectors at Al-Aqsa mosque—as was done in 2017—can set off a wave of popular protest or spread rapidly throughout the country.

As in Jerusalem, Israel is tightening its grip over the West Bank in a bid to extend its sovereignty over the territory through annexation. If it succeeds, it will mean the permanent disenfranchisement of millions of Palestinians. This has led Israeli and international human rights organizations—most recently Human Rights Watch—to join Palestinians in declaring Israel guilty of apartheid. While Israeli leaders may believe this regime, and the attendant subjugation of Palestinians, is sustainable, the unrest in Jerusalem and its escalation beyond the city limits shows it is not. The basic rights of Palestinians cannot be denied to them indefinitely without producing indefinite conflict.

At the onion’s core is the continuum of Palestinian dispossession across time and space, stretching over a century and throughout historic Palestine. It is not only the dispossession of homes and of lands, but of public spaces, like Damascus Gate, and of a sense of ownership over places that mark the cultural identity of a people. That is why Jerusalem—the center of Palestinians’ and Israelis’ spiritual and political world—is such a flashpoint.

How this current conflagration will develop is uncertain. Ramadan draws to a close this week. The fires could flicker and fade, or they could rage on. Frustration is high and the ground is like a tinder box. On May 15, Palestinians everywhere memorialize Nakba Day, in commemoration of the defining moment of their collective dispossession in 1948. In the current climate, in which the ongoing nature of that dispossession is on full display, there is no telling what could happen.

Omar H. Rahman is a writer, political analyst, and visiting fellow at the Brookings Institution’s Doha Center, where he is authoring a book on Palestinian fragmentation. His writing has appeared in The Washington Post, Foreign Policy, The Guardian, Rolling Stone, Lawfare, VICE, Quartz, PBS NewsHour, Al-Jazeera English, and The National, among other publications.