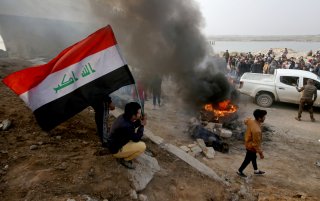 President Donald Trump and his supporters applaud his legacy as the first president since Jimmy Carter not to embroil U.S. forces in a new foreign conflict. Certainly, after almost two decades in Afghanistan and almost fifteen years in Iraq, the American electorate values military restraint. There is a fine line, however, between restraint and abandonment of global leadership. Trump sprinted across that line, and global security may pay the price.

The problem is irredentism, countries laying claim to former territories and willing to enforce such claims with military force. It is the notion that led late Iraqi president Saddam Hussein to invade Kuwait in 1990 and which Argentine military dictator Leopoldo Galtieri used to justify Argentina’s invasion of the Falkland Islands in 1982.

With multiple regimes challenging the post–World War II and the United States either ill-equipped or unable to confront them, the challenge is formidable. Consider the number of irredentist or revanchist challenges that now loom:

Turkey: Former Foreign Minister and Prime Minister Ahmet Davutoğlu was the main theoretician behind President Recep Tayyip Erdoğan’s previous policy of neo-Ottomanism. In its most benign sense, neo-Ottomanism might have been envisioned as something akin to the British commonwealth. But Erdoğan was not benign; he instead sought to leverage past Ottoman ties in favor of enhancing Turkey’s power and influence on the world stage. The problem was that the Ottoman Empire’s former subjects had quite a different memory of Turkish imperialism than did most Turks. As neo-Ottomanism collapsed, Erdoğan abandoned any pretense and questioned the legitimacy of Turkey’s borders. Pro-government media unveiled maps which showed Turkey absorbing the entirety of both Armenia and Cyprus, and incorporating chunks of Iraq, Syria, Greece, and Bulgaria. That Turkey now appears to act on such ambitions raises concern, especially as Erdoğan may instigate conflict to distract the Turkish public from his increasing tenuous economic stewardship.

Azerbaijan: Azerbaijan caught not only Armenia but also the United States by surprise when it invaded Nagorno-Karabakh on Sept. 27, 2020. While diplomats and pundits can excuse the move citing UN Security Council Resolutions recognizing Azerbaijani sovereignty over the region, both the timing of the attack—on the centenary of the Ottoman Turkish attempt to conquer the region during the first Turkey-Armenia War—and Azerbaijani President Ilham Aliyev’s victory speech delegitimizing Armenian nationhood and claiming Armenia’s capital Yerevan as Azerbaijani should raise alarms. Indeed, Aliyev’s repeated claims to Armenian territory should lead analysts to ask not whether there will be a new war, but when. That such a conflict could draw in Russia and Turkey should raise alarm bells given Turkey’s continued membership in NATO.

Venezuela: Economic implosion often precedes irredentist adventurism. Saddam’s claims on Kuwait were not new. What had changed was that the Iraqi dictator had presided over a war, which had bankrupted the country. For Saddam, an invasion of Kuwait was simply a short-cut to solvency. A parallel situation now arises with Venezuela. For more than two decades, first Hugo Chávez and then Nicolás Maduro have transformed Venezuela from South America’s wealthiest countries to among its poorest. Rather than acknowledge their own culpability for Venezuela’s situation, Chávez and Maduro voice fantastic plots and conspiracies. For example, after Exxon Mobil signed an agreement with neighboring Guyana to extract oil from the Stabroek in Guyanan waters, Maduro declared, “There is a great and serious campaign against our country . . .  that could justify at any time escalation of events against the country.” To justify his saber-rattling, Maduro sought to dismiss an unfavorable 1899 arbitration ruling on the grounds that Venezeula’s lawyers at the time were part of an American-led, multi-century plot against Venezuela. His position, however, ignored that Venezuela had again buried the hatchet a half-century previously when it signed the 1966 Geneva Agreement which accompanied Guyana’s independence from Great Britain. As Maduro grows more desperate, he might believe that reasserting claims to part or all of Guyana could district Venezuelans with national fervor and give a quick fix to some of Venezuela’s fiscal problems.

China. The problem is not limited to small countries. China is an imperialist power. It seeks to project its power further abroad while eliminating non-Han populations at home. Chinese leader Xi Jinping unilaterally abrogated Hong Kong self-rule decades early and now threatens Taiwan, a country which, despite Beijing’s claims, has seldom been subordinate to mainland Chinese rule.

The possibility of a Chinese attack on Taiwan is real, but equally dangerous is China’s aggression against India. Chinese authorities may see U.S. withdrawal from Afghanistan and the distractions of presidential transition as a green light to advance China’s own drive for supremacy over the Himalayas. That the region is quiet now is less the result of a trend toward peace and more a result of the Ladakh conflict quite literally being frozen. When the snows thaw this spring, however, Joe Biden may be faced with multiple threats.  China and its subordinate Pakistan appear to be coordinating their actions to leverage India out of Ladakh. China may use its leverage over Pakistan to further change the status of Gilgit-Baltistan, not only de-linking it from Kashmir but also perhaps even altering the border itself. That Pakistani prime minister Imran Khan shows complete fealty to Xi simply signals to Chinese leaders that they need not consider Pakistan’s nationalist sentiment when they want to make their move.

Here, India and Pakistan will not be the only victims. The Chinese government has already targeted Nepal, moving border posts, diverting rivers, and encroaching on Nepali lands.

Chinese encroachment in the South China Sea should be seen in the same irredentist light. China’s citation of the Nine-Dash Line might be historic nonsense, but that will not stop Chinese ships from increasingly enforcing its claims. Its “salami-slicing” tactics might work against smaller countries and when the United States is distracted by its own political maelstrom, but Biden should understand that it is unlikely that India will allow such tactics to go unchallenged along its frontier.

These are just a few of the growing number of claims which governments, sensing American and international distraction, appear to be activating. Eritrean troops now appear involved in the Tigray conflict. Ethiopian forces have also reportedly attacked Sudan. Iran justifies its efforts to undermine governments in Yemen, Lebanon, and Iraq in the fact that its strategic boundaries reach the Eastern Mediterranean and the Gulf of Aden. Analysts question not whether Russian president Vladimir Putin will make a move to expand Russian influence further, but rather where: the Balkans, Baltics, or perhaps Belarus or Kazakhstan.

The simple reality is this: While proponents of restraint may applaud Trump’s efforts to cease “endless wars” and while progressives may cast aspirations about U.S. global leadership, there is a price to be paid for the vacuum America’s increasing inward focus creates. The United States was never the catalyst for conflict but rather was the lid on the pressure cooker. America’s retreat opens the door to dictators and despots to pursue their own revanchist ideologies. The question for Biden then becomes whether he will ignore this trend, as Trump and Obama once did, or recognize that the post-World War II liberal order cannot exist if no power is willing to enforce its pillars.