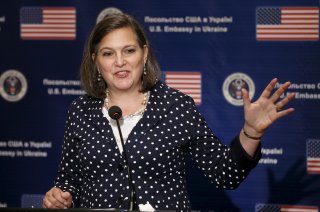 President-elect Joe Biden plans to name Victoria Nuland to a top State Department post, sending the clearest signal yet on the president-elect’s likely policy approach to Russia and Ukraine.

Earlier this month, Politico reported that the Biden-Harris transition team had decided on a new round of foreign policy and national security appointees. Biden is expected to nominate veteran diplomat Victoria Nuland as undersecretary of state for political affairs, according to sources familiar with the process. These sources also told reporters that the president-elect will tap Wendy Sherman, a veteran of the Obama and Clinton administrations, as the deputy secretary of state.

Nuland was the U.S. Ambassador to NATO under President George W. Bush from 2005 to 2008. She served as State Department spokesperson under Secretary of State of Hillary Clinton before succeeding Philip Gordon as the assistant secretary of state for European and Eurasian affairs. More than simply an “Obama veteran,” Nuland played a central role in executing the Obama administration’s Ukraine policies during and after the 2014 Euromaidan revolution. She conveyed U.S. support for demonstrations in Kiev against the government of President Viktor Yanukovyvch, condemning efforts by local police to quell the protests. “It is still possible to save Ukraine’s European future, and that’s what we want to see the president lead. That’s going to require immediate security steps and getting back into a conversation with Europe and with the International Monetary Fund and bringing justice and human dignity to the people of Ukraine,” said Nuland in December 2013. She met with pro-EU protesters in Kiev on Dec. 11, distributing food in a symbolic gesture of solidarity with anti-government protesters; the move prompted widespread outrage in the Kremlin, which perceived Nuland’s outing as a brazen act of public interference in Ukraine’s domestic affairs.

It was revealed in early 2014 that Nuland, along with then-U.S. Ambassador to Ukraine Geoffrey Pyatt, was intimately involved in ongoing U.S. efforts to curate and install a new government in Ukraine. “I think Yats is the guy who’s got the economic experience, the governing experience,” said Nuland in a leaked phone conversation with Pyatt, referring to the installation of Ukrainian politician Arseniy Yatsenyuk to a top government post. Nuland likewise voiced her strong dispreference for opposition leader Vitali Klitschko: “I don’t think Klitsch [Klitschko] should go into the government. I don’t think it’s necessary, I don’t think it’s a good idea.” The phone call is best remembered for Nuland’s colorful reference to the European Union, which did not fully see eye-to-eye with Washington on key questions involving the fate of the Yanukovych government: “OK. He’s now gotten both [proposed UN mediation team member [Robert] Serry and [UN Secretary General] Ban Ki-moon to agree that Serry could come in Monday or Tuesday. So that would be great, I think, to help glue this thing and to have the UN help glue it and, you know, F*** the EU.” After widespread rebuke from high-placed EU officials, State Department spokesperson Jen Psaki announced that Nuland “has been in contact with her EU counterparts and of course has apologized for these reported comments.”

Nuland continued to play an active role in shaping U.S. policy toward a post-Maidan Ukraine, meeting with President Petro Poroshenko on several occasions to discuss the implementation of the Minsk protocols and Ukraine’s progress on domestic reforms. Nuland was likewise involved in ultimately successful efforts to press for lethal military aid to Ukraine.

More broadly, Nuland has supported and facilitated Obama-era policies aimed at confronting, containing, and deterring Moscow across multiple policy fronts. Nuland was a prominent voice in favor of expanding the Magnitsky Act in response to Russian opposition leader Boris Nemtsov’s assassination. The act was successfully bolstered in 2016, giving the U.S. government broad leeway to impose sanctions on anyone found to be guilty of human rights violations. Vice President Biden, who was referenced in the call between Nuland and Pyatt, likewise played an active role in supporting the Maidan demonstrations. He subsequently developed a personal relationship with Poroshenko, allegedly offering the Ukrainian president specific policy guidance during a leaked 2016 phone conversation.

Nuland in, short, is a capable and committed advocate of the Obama-Biden approach to Russia and Ukraine. In a Summer 2020 op-ed for Foreign Affairs, Nuland offered a series of policy prescriptions for the next president on how to deal with Russia: a united global front to check and deter Russian military aggression, a more robust toolkit to crack down on Russian disinformation, further sanctions, and public diplomacy efforts aimed directly at the Russian people. Many of these proposals enjoy widespread support throughout the rest of Biden’s assembled foreign policy team, and with the president-elect too.

Reports of Nuland’s future appointment are sure to come as a source of elation to the government in Kiev. By the same token, they send perhaps the clearest message yet to Moscow that the prospects for meaningful U.S.-Russian rapprochement under a Biden administration appear exceedingly slim.