Is Joe Biden His Own Worst Enemy? 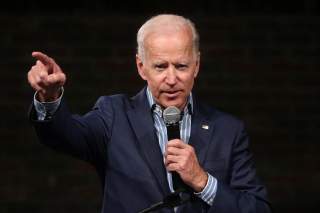 Former Vice President Joe Biden, the current Democratic presidential front runner, has had plenty of opportunities to prepare himself for the last campaign of his political life. He has already been involved in four presidential elections. Biden ran twice for president himself, in 1988 and 2008, and twice as the vice presidential nominee alongside President Barack Obama, in 2008 and 2012. Biden had months to ready himself to respond to questions about his past, and Donald Trump’s taunts sure to come his way, once he officially announced his candidacy. He had ample time to assemble a war room, recruiting the likes of David Axelrod and David Gergen to respond effectively within a news cycle to whatever comes his way. Instead, he is often fumbling like some newcomer who decided on the spur of the moment to join the race.

When Trump stated that compared to Joe Biden “I just feel like a young man. I’m so young. I can’t believe it...I’m a young vibrant man.” Biden responded: “If he looks young and vibrant compared to me, I should probably go home.” It is a surprisingly lame response compared to, say, reminding Trump that these days one’s health status includes his mental health . . . Such a response would have led Trump to tell the world that his doctors told him he is the sanest president since sanity was invented and kept the news cycle on the question of whether Trump is fit to serve. Moreover, the expression “go home,” i.e. quitting, two days into the campaign, even if though it was raised in an ironic form, is surprising, to say the least.

When former President George W. Bush was asked about his drunken, brawling days at Yale, he stated, “When I was young and irresponsible, I was young and irresponsible” and changed the subject. Biden could similarly state that he learned a lot over the last forty years but that the issue now is not what he said in the 1970s or 1980s but the ways Trump is now harming everything a decent human being cares about, and how to stop Trump from harming the nation for four more years. If Biden repeated these words each time the issue arises—the press would soon stop harping on his past as it did for Bush. Instead, Biden comes up with a different half apology every time his yesterdays are examined.

Trump has been very effective in coining derogatory labels for his opponents and repeating them to the point that, for many, the label—Crooked Hillary, etc.—comes up automatically with the mentioning of the name. Trump started calling Biden, Sleepy Joe. After several news cycles, Biden came back with calling Trump – “a clown.” It is a lame response that feeds into concerns that Biden is too nice a guy to take on someone as brutish as Trump. While a clown is someone not to be taken seriously, he is also harmless and entertaining. Is this what Biden wants us to think about Trump? Would not Toxic Trump be closer to the mark?

Criticisms of innocent hugs provide Biden an opportunity to appeal to men, who unlike women, disproportionately favor the GOP. Biden could repeat that he has long shown that he understands that rape, sexual abuse, and harassment are not sexual acts but forms of violence. He hence led the introduction of the Violence Against Women Act in 1994. However, he should note, that when one lumps innocent kisses on the cheek, pats on the back and such with sexual abuse, we find kindergarten teachers afraid to hug kids who cry inconsolably because they bruised their knees—and men minimizing contact with female coworkers and employees. (Okay, okay, I grant Biden best leave giving back massages to professionals.) Men either feel harassed themselves or give up because they feel they will be condemned, whatever they do. It’s time for Biden to call for drawing a line between sexual abuse and sheer expressions of affection and concern, even if these are not always well received.

Watch and see how Biden deals with the anti-Semitic and pro-Hamas comments of Rep. Ilhan Omar (D-MN). Will he have the fortitude to make these comments into his Souljah moment? This reference is to a key turning point in the election of then-Arkansas Gov. Bill Clinton. In 1992, he criticized rapper Sister Souljah after she made offensive remarks such as “if black people kill black people every day, why not have a week and kill white people?” The moment quickly became a code word for politicians who stand up to radicals in their own party. If Biden stands up to Rep. Omar he may lose some primary voters, but he will greatly enhance the confidence in him among moderate Democrats and Independents—who will determine the outcome of the 2020 election as they did in 2018. (The Left turned blue states bluer, but it was left to the moderates to flip red states). Will Biden have the backbone (or whatever organ it takes) to act forcefully?

Trump set such a low bar for what it takes to become a U.S. president, Biden may blunder his way into the White House. However, is it too much to ask for a president who does his homework before he faces an adversary, assembles an effective staff, and does not suffer from a foot in the mouth disease?

Amitai Etzioni is a University Professor and Professor of international affairs at The George Washington University. His next book, Reclaiming Patriotism, will be published by University of Virginia Press this summer.