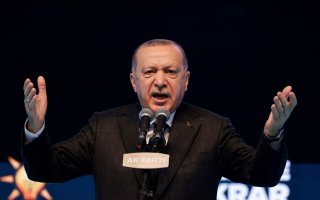 “I appreciate so very much the example your country has set on how to be a Muslim country and at the same time, a country which embraces democracy and rule of law and freedom,” Bush said while visiting Erdoğan’s Ankara residence.

President Barack Obama famously called Erdoğan one of his top foreign friends. He even quipped that he sought Erdoğan’s advice about how to raise daughters. Never mind that the murder rate of women and girls had already increased 1,400 percent during Erdoğan’s tenure.

President Donald Trump took a tough stand on Turkey to compel the release of Pastor Andrew Brunson, but turned a blind eye toward Turkish-sponsored jihadism. Trump also betrayed America’s Kurdish allies when he greenlighted Turkey’s invasion of northern Syria, and then praised Erdoğan effusively even as Congress focused its ire on Erdoğan for purchasing the S-400 missile system from Russia.

When Joe Biden entered office, he recognized Erdoğan’s reality and appeared determined to deny Erdoğan the benefit of the doubt. It took ninety-three days, for example, for the first phone call between Biden and his Turkish counterpart, a slight not lost on the Turkish audience. Unfortunately, while Biden and his team refrained from his predecessors’ praise, they nevertheless fell into his trap by taking offers of Turkish diplomatic cooperation at face value.

Contrary to the talking points put forward by Turkey’s official and unofficial lobbyists in the United States, Turkey’s offers of cooperation are neither altruistic nor beneficial to U.S. strategic goals.

After it became clear that Biden would uphold his campaign rhetoric to leave Afghanistan, Erdoğan suggested Turkey could take over operations at the Kabul airport. This move was in Turkey’s interests. For more than a decade before his premiership, Erdoğan had cultivated close ties to Afghanistan’s most militant Islamists. Even as the Taliban insurgency raged, Erdoğan made clear he bore no ideological animus to the group. Whether or not U.S. troops and fellow NATO members departed, Turkey signaled that its investment and its nationals’ presence would continue, even if many of its troops returned home. Simply put, Turkey had a financial interest in keeping the airport open. Erdoğan also saw an opportunity to ensnare Biden in a diplomatic bargain.

“We want America to meet some conditions,” Erdoğan explained. “Firstly, America will stand by us in diplomatic relations. Secondly, they will mobilize their logistical means for us... and the other one is that there will be serious problems on financial and administrative issues, and they will give necessary support to Turkey.”

Effectively, Erdoğan wanted Biden’s support in his continued land grabs and in ethnic cleansing campaigns against Kurds and Yezidis. He also pushed for the Biden team to intercede with the judiciary to derail sanctions-busting and assault cases against Turkey and its agents. Erdoğan wanted to collect American concessions for a policy that Turkey would pursue regardless. Qatar ultimately stepped in to help with the airport, but Biden’s willingness to consider Turkey’s offer—and the State Department’s reluctance to hold Turkey to account while negotiations—affirmed Erdoğan’s strategy.

“Turkey is at the epicenter of a complex web of fault lines throughout Greater Eurasia,” he explained. “Turkey stands as a reliable ally that can deliver at the moment of crisis—a friend in need…Turkey and the United States must work together.”

Specifically, he said that Turkey can “mobilize grassroots support for stabilization efforts and its security-related efforts, such as those in Libya and Syria.” In exchange, all Turkey would need is U.S. appreciation and understanding.

Consider what this would mean, however. In Syria, Turkey provided logistical support, weaponry, and safe haven not only for Al Qaeda-linked groups but also for the Islamic State. While Turkish officials justify their actions in countering alleged Kurdish terrorism, the evidence suggests terrorism goes the other way: Turkish-backed proxies regularly attack Kurds and kidnap and rape women, while Turkish drones seldom differentiate between alleged militants and schoolchildren. It was Turkey’s enabling of the Islamic State that forced the United States into its relationship with Syria’s Kurds in the first place, ultimately leading to a Kurdish victory at the siege of Kobane. For the United States to compromise with Turkey in Syria would enable militancy and undercut stability and security across the region. Put another way, to trust Turkey on Syria is akin to trusting China on Taiwan. Besides, Washington’s choice in Syria is not merely between Erdoğan and Syrian dictator Bashar al-Assad; the Kurds offer a third path.

While Mercan is correct that Libya is a mess, the greatest problem at present is the presence of foreign fighters—Russian paramilitaries and the Wagner Group on one hand, and Turkish mercenaries and Turkey-backed proxies on the other. There is broad consensus in the international community that the best path forward is a withdrawal of all foreign forces from Libya. While Europe is willing to make this demand without exception, the State Department has repeatedly sought to dilute criticism of Turkey’s interference. The Erdoğan regime now tries to convince officials in Berlin and Washington that a revival of a NATO role could give cover for Turkey to remain while compelling Russia’s withdrawal. This would be shortsighted, however, given Turkey’s efforts to overturn more than a century of maritime law precedent and its willingness to support not the UN-recognized government but rather militants only loosely aligned but functionally independent.

Erdoğan has become the Typhoid Mary of diplomacy. Turkey’s track record belies Erdoğan’s sincerity. Rather than treating Erdoğan’s initiatives as sincere, it is time for the Biden administration to recognize Turkey’s diplomacy for what it is: A self-serving attempt to avoid accountability for policies that Erdoğan remains ideologically committed to continuing.