Joe Biden is No Hillary Clinton 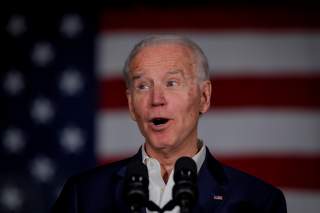 Super Tuesday unleashed the primal screams of those “Bernie Brothers” into the void. “I don’t understand how anyone can support Joe Biden??!!!”

Bernie was supposed to be well on his way to racking up an insurmountable delegate lead by Super Tuesday. Biden was supposed to have been finished off by February 12. Biden’s campaign “collapsed” in New Hampshire, CNBC’s Jake Novak said; no other campaign ever “failed as spectacularly as Biden has.” The Nation published Jeet Heer’s post-Iowa column under the headline “Bye-Bye, Biden.”

“He doesn’t inspire voters!” they say, after he won 840,000 more votes than Sanders on Super Tuesday.

Actually, most Bernie-surrogates-cum-analysts don’t understand how Democrats can support and miss President Obama, either. The boys of Chapo Trap House podcasters called Obama “the disappearing president. The least consequential two-term president ever, maybe” in 2018. “No one is mad at him. I mean, we are. It’s like [mainstream Democrats], ‘We miss you.’ … He completely failed.”

That says a lot about why they are surprised Biden is winning. That which they attacked Obama for—nothing much happened on a day-to-day basis that people had to be worried about under his leadership, he did not try to undermine or overthrow our systems of government and social norms, and, perhaps most galling to the Trap House, he did not push a radical socialist agenda—is exactly what he’s beloved for.

Most Americans, it turns out, are not obsessed with politics as a volition in itself. They do not want to debate the finer points of Bernie Sanders’ “Medicare 4 All” plan versus that of Elizabeth Warren the “snake.” They do not want to have to tune in to the news to see if the republic is still standing. Actually, they quite like their country and want to see changes made to particular policies, not wholescale arson. They do not want to upend their own lives.

Because the Bernie brigade is so obsessed with politics and the pursuit of a bro utopia (Chapo wants a world where no one works and everyone can play video games all day), they spend most of their critique of Obama, Clinton, and Biden listing off policies from many years ago.

“It’s really staggering to look back on the legislation that Obama signed into law during his first two years in office, because, in comparison to the actual circumstances in the country at the time, it’s not much at all,” Virgil Texas said in 2018, attacking Obama for appointing Tim Geithner and not creating a “national jobs program” or “massive new entitlements” or “reinvigorating the federal government and the place of society within the economy.” (It’s also an indication of how far to the extreme they are on the scale, when many of Obama’s policies were extremely controversial on the right and, sometimes, the center.)

Mehdi Hasan, contributor and host for The Intercept and Al Jazeera English, compared Biden to Hillary last year because he voted for the Iraq War (before opposing the Surge) and he wrote the successful crime bill and assault weapons ban that Sanders voted for. His predictions about Biden’s electability are already being proven wrong.

“Millions of black voters refused to turn out for Clinton in 2016. Why wouldn’t they do the same in response to a Biden candidacy in 2020?” Hasan asked.

Maybe Hasan should ask them.

Biden won big in all the states in the South, where the electorate was 27 percent black, and overall, he won close to 60 percent of the black vote, to Sanders’s 20 percent.

Or, this: “Yet now, it seems, he and his supporters believe this serial loser is the only Democratic candidate able to win back white-working class voters from Trump and triumph in the 2020 presidential election? Where is the actual evidence for this ludicrous claim?”

Summarizing Super Tuesday results, three Five Thirty-Eight analysts wrote, "Biden did really well among white voters, especially those who decided late: Of the 34 percent of white voters who made their minds up in the last few days, 51 percent of them went for Biden compared with 17 percent who backed Sanders. Overall, Biden bested Sanders among white voters in eight states, including a 15-point edge in Minnesota.”

So there goes the claims that Biden doesn’t inspire Democratic voters. (Alternatively, there could be the claim that voters were inspired to vote against Sanders, not exactly a resounding argument for his candidacy, either.)

Bernie’s argument that he could bring out millions and millions of new youth voters and break the record for turnout? Bernie can’t even hit the same numbers he did in 2016 in his home state! He got 35,000 less votes in Vermont even while total turnout in the state increased.

Turns out young, lazy voters who want to “post in the morning, game in the afternoon, and podcast after dinner” are not likely to vote. It probably doesn’t help when the candidate consistently tells them that the system is rigged and their vote doesn’t matter anyway.

Where did voter turnout increase? According to Politifact, “turnout increases [in Iowa] were concentrated in more well-educated areas where Sanders struggled, rather than in areas where he ran strongly.” Lucian K. Truscott IV wrote at Salon, “Virginia turnout was up 70 percent over 2016. In North Carolina, turnout was up 17 percent; in Texas, it was up 45 percent [all states Biden won]. … Virginia exit polls showed significant Republican crossover votes in the Washington suburbs.”

So Bernie is trying to win voters who don’t vote, while motivating moderate voters to vote against him; and Biden is winning voters in the age and income demographic groups that turn out in droves, while bringing in some moderate Republicans. You don’t have to be Brian Williams to be able to do the math.

How could it be? Mehdi Hasan caricatured Biden’s agenda in a way that sounds appealing to many Americans: “He’s just said, ‘Vote for me so we can get normality back, so we can go back to a pre-Trump era.’” Sign me up.

Li, of course, had a response to the particular question: “He is putting out ambitious proposals. For example, his ideas on climate change, and he is very, very aggressive on gun violence.”

But Hasan’s obsession with policy and radicalism is delusional from the start. It’s a misunderstanding of how elections, particularly the 2016 election, worked out. Hillary didn’t lose because she was insufficiently liberal.

“I voted Democrat for the last 25 years … I would have voted for somebody less liberal,” one Democrat-turned-Trump voter from Wisconsin, quoted in Time’s post-election piece, said. “You weren’t brought into this world to rely on Ms. Suzy down the street to pay for you,” one from Michigan said. “Urban liberals and social justice warriors and the media all began pandering to subsets of people. … [L]iberty survives better in a capitalist, nationalist government,” said a Pennsylvania voter. Really sound like people who would vote for a “socialist.”

Hasan, however, in his 2019 piece, told us to ignore the real reason Hillary lost three midwestern states: “Forget, for a moment, his ‘blue-collar-uncle-at-the-end-of-the-bar persona.’”

A study by Florida Atlantic University Professor Ethlyn Williams found, in the words of Williams, “charisma appears to counterbalance the negative effects of a narcissistic personality in people's perceptions of a leader and going ahead and voting for that person” and that that Trump’s braggadocious style was interpreted as “appearing strong.”

You can call Biden’s style a lot of things, but one thing he isn’t is, what Clinton was called, “cold” or “contrived.” Biden has a spontaneous wit he deploys in debates and events, for example, his line that Tom Steyer was a “Tommy come lately” to the issue of criminal justice reform or telling Bernie to “put your hand down for a second, Bernie.”

Clinton was a “carpetbagger” who didn’t even campaign in the Rust Belt. Biden is Scranton, Pennsylvania, high-school football star, a lifeguard at a black pool who took on Corn Pop and won his respect.

Woke liberals would point out, too, the element of sexism present in said characterization of Clinton and Biden. If they are right that Clinton’s (and Warren’s) campaign was doomed by sexism, then that only makes the case stronger for Biden. Biden, it must be noted, is not a woman, and wouldn’t face that sexism.

It’s not the only argument against Biden’s candidacy. It may be that voters don’t want to vote for someone in their upper 70’s and would prefer a sprightly young man in his early 70’s. It may be that Biden’s record of gaffes and uncontrollable verbal assaults worries voters rather than endears them. Trying to predict an election is a fool’s errand.

But one thing he is not is Hillary. He has the same thing in common with Hillary as every other Democrat does: his party affiliation. To be sure, that is one thing that distinguishes him from Sanders and many of Sanders’ voters.