Joe Biden Promises to Turn All of America into California 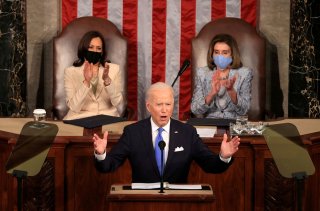 You’ve got to give President Joe Biden credit. He succeeded in making the Academy Awards only the second-most boring and preachy thing on TV this week.

But for those who persisted through a low-energy ramble of six thousand words delivered to a sparse and ridiculously masked audience in the Capitol, there was actually a vision that should be chilling: the administration Biden nominally leads and its friends in Congress want to turn all of America into California.

Of one the many taxes Biden plans to raise, in part to pay for a $2.3 trillion “American Jobs Plan” that would be tossed on top of eight or so trillion in extraordinary spending already planned, Biden assured us, “This will only affect three-tenths of 1% of all Americans.” That’s the oldest trick in the book in California: start with taxes supposedly limited to the top and then expand them to the middle class. If you don’t believe me, just ask the waves of “rich” middle-class Californians packing their belongings in U-Hauls and fleeing.

“Let’s end our exhausting war over immigration,” implored the U.S. president, standing before two progressive fanatics from California, one of whom has demonstrated political skill. Biden doesn’t actually mean enforcing the law and deporting those here illegally—quite the opposite. Once people who broke the law to come here can vote, Democrats hope to see the same leftward political transition that occurred in California in the 1990s and 2000s replicated nationally. If they thought for a moment those illegal aliens might become Republican or independent voters, then America’s border with Mexico would look like the DMZ between North and South Korea overnight.

Meaningless gun control is another California special. It’s easier than getting criminals and mentally unstable bums off the streets. Biden bemoaned “magazines that hold 100 rounds.” Presumably, whichever White House pencil-neck who drafted that line has never held a firearm: such magazines are novelties and not used in crimes. In three decades around guns, I’ve never seen one. But banning magazines and scary-looking “assault weapons” of the same caliber and action as respectable-looking hunting rifles is a step to disarming the law-abiding. Oddly the criminals never seem to comply—as demonstrated in California’s collapsing cities.

Biden’s breezy lies about race are also de rigueur among California’s political elite, if not its public. Voters in the Golden State last year overwhelmingly rejected an effort to restore affirmative action, which the electorate outlawed in 1996. Yes, even in a lefty state where Biden beat Donald Trump by thirty points, voters rejected race-based obsession by a fifteen-point margin. But the Hollywood and Big Tech elite nonetheless could cheer Biden’s hope that “we have a real chance to root out systemic racism that plagues American life in many other ways.”

In reality, Jim Crow was ended through federal legislation in the 1960s and most Americans know their country is the greatest multicultural nation in world history—a place where anyone with grit and determination can make it. Biden had nothing to say about black-on-black crime or the atmosphere of lawlessness that Antifa and Black Lives Matter have inflicted on cities coast to coast since last summer.

Much of the rest of the speech was filled out with the bedrock belief of California politics, which has helped bring the state to the brink of disaster: that the government knows more about business than the private sector. Thus did Biden call for greater federal control of healthcare, auto manufacturing, batteries, windmills, semiconductors, farming, electrical grids, and medical research. Apparently, U.S. leaders walk into the post office or DMV and think, “These people should run our economy too.” That such central planning led to fiascos like the half-billion dollars wasted on Solyndra during the Obama-Biden administration and is the reason Cuba and Venezuela don’t work, is lost on the dreamers in the White House.

Biden will get some of his vision, but the only lasting part will be America’s enormous federal debt and looming inflation. His legislative agenda beyond fiscal matters is already dead. Democrats can tax and spend with their bare congressional majorities until they probably lose one or both houses next year. They seem to instinctively know this and have embarked on a suicide mission.

Biden increasingly symbolizes the sad last hurrah of the Baby Boomer Left. That cohort first took the White House in 1992 with Bill Clinton amid much excitement and trademark self-regard. Those who danced at Woodstock finally had the reins of power. It departs three decades later as a desiccated zombie, trying ideas on an ever-grander scale that have already failed, and leaving a deeply indebted country with every national institution in shambles. California here we come!