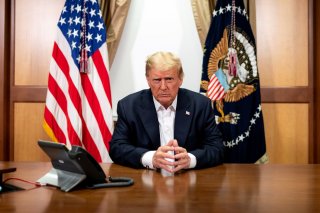 Perspective on politics comes only with time. As the United States retreats from the Trump era, perspective can be gained by contemplating Trump for what he has so suddenly become. He is not Benito Mussolini poised to preside over a country made subservient to him, readying himself to invade some twenty-first-century equivalent to Ethiopia. It was always through war that fascism came into its own, and Trump started no war. Not a bona fide fascist, Trump is not a conservative or a populist leader either. Conservatism is among other things an idea, and one that in the United States goes back to the creation of the Republic (the Enlightenment) and/or to some Judeo-Christian foundation (the Ten Commandments broadly construed). Trump’s obscurantism and his disinterest in actual Christianity deprive him of a conservative’s credentials. Likewise, he could never separate his populism from his person, a common enough problem among populist figures, and Trump’s businesses, his fabulous self-love, and his weekends at Mar-a-Lago compromised his populism. He got almost 74 million votes in the 2020 election, no small feat, but it was not enough to win an Electoral College hospitable to those with a populist touch.

So what is Trump? He is less than he says and less than he seems. He is not a man without precedent. He is, rather, a relatively ineffective one-term president. In foreign policy, he shifted the consensus on China toward greater concern. He had real diplomatic achievements in the Middle East, and by design or by accident he has compelled Europe to think more prudently about its own security. As for his domestic policy, it is hard to say what will endure as policy, apart from the judicial appointments and whatever governing philosophy they represent. Much of what Trump achieved through executive orders will soon be reversed. The Republican Party may remain loyal to some image of Trump; it may continue to profess loyalty, but policy-wise this will decide little for the party.

The perspective to be gained from the transformation of Trump the ubiquitous into Trump the has-been is the sight—at last—of the country behind the White House. It is not on the verge of civil war. Its most significant realities are likely those at a far remove from spectacle, from the salted bread of endless grievance and the three-ring circus of the Trump show. A brilliant observer of politics, Isaiah Berlin was fond of quoting the words of the philosopher C.I. Lewis: that “there is no a priori for supposing the truth, when it is discerned, will necessarily prove interesting.” And what could be more boring than having Donald Trump join the ranks of John Tyler, James K. Polk, Millard Fillmore, Rutherford B. Hayes, and Chester Arthur? But the orgy has ended, and there he is. Minimizing Trump and consigning him to history will allow Americans to see themselves after four years of squinting through a glass darkly.

In this clear, sobering light, Republicans and Democrats alike should try to escape from the second imperial presidency that arose with Barack Obama and was then taken to a baroque extreme by Trump. The first imperial presidency was a function of the Cold War. It was buoyed by memories of World War II and by the primacy of international politics, by U.S.-Soviet summitry, and by nuclear brinkmanship. It came to dust in the Vietnam War, which demystified the presidency. The second imperial presidency was not a function of foreign policy but of celebrity, of personalities and narratives that were in and of themselves supposed to be transformative. But the very essence of leadership in a democracy is that it is not monarchical, it is not incumbent on the person of the leader, individual leaders do not transform democracies, and they should not be given that power. Voters transform democracies, a banal fact of American democracy. However banal the fact, there is no a priori for supposing the truth, when it is discerned, will necessarily prove interesting.