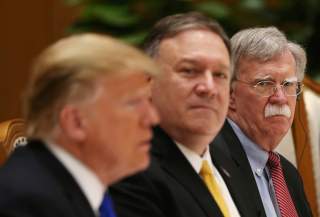 More than any line in the conservative movement in 2019, for parishioners of the American right, there is one decision point above all else that cuts through and clarifies all the sound and the noise: loyalty to President Donald Trump.

For all the talk of a generation-defining political realignment, the career capstone of National Security Advisor John Bolton shows that, in the policy arena, a pliable and amateur principal is a hijackable vehicle par excellence.

Sure, Bolton had to swallow his pride in various public appearances, most recently in a round of Sunday show appearances this past weekend. “Do you take Kim Jong Un at his word?” Jake Tapper asked on CNN Sunday. “The president takes him at his word,” said the former ambassador. “No, I know he does, but do you?” replied Tapper. Bolton: “My opinion doesn’t matter.”

Embarrassing, maybe, but consistent. The national security advisor has explained time and again that he is not “the decisionmaker.” But in the meantime, in return for his occasional, minor humilation, Bolton enjoys wide-ranging authority to craft the national security policy of the United States, behind the scenes. He’s the contra Mattis; instead of resigning in moral protest, Bolton wears the mask of obsequiousness, while subtly nudging a reluctant president toward a more tough-minded line.

On North Korea, recent events have demonstrated that Bolton’s clout is expanding, not contracting. North Korea had long been the more-or-less purview of Secretary of State Mike Pompeo, not the National Security Council (NSC). It may seem odd that a policy item so mammoth had previously been de facto partitioned into one agency of the government, but that’s this president’s modus operandi. He prefers “portfolios,” as scuttled, would-be Ambassador to South Korea Victor Cha explained last year: Bolton gets Syria and Russia, Pompeo gets North Korea. That’s just the way the president rolls, a former senior administration and Trump campaign official explained to me: he wants to run the executive “like he ran his company.” Divide and conquer, in other words.

Ideally, the former official told me, Trump wouldn’t even have a chief of staff. Mick Mulvaney, only the acting chief of staff going on three months, has made way for a shadow chief of staff on at least equal footing, officials inside the administration and partisans in the White House orbit near-universally say: Jared Kushner. If there’s a second rule of TrumpWorld, it’s this: “You don’t mess with Kushner,” a Trump campaign official told me; the campaign captain, digital media savant Brad Parscale, is a Kushner loyalist.

But it’s in this environment that Bolton—and his allies, such as Fred Fleitz, Frank Gaffney and the Center for Security Policy—have thrived. The premium, in practice—and to the chagrin of many Trumpist true believers—is on personal loyalty and not philosophical fealty, to the ideas that originally propelled Trump to power. Observers can look askance at Trump’s staffing decisions, but they make sense in this light. Trump likes Bolton. And now he’s expanding his territory, outside his portfolio—even risking coming to loggerheads with Pompeo. On the contrary, Jeff Sessions, the former Attorney General, was, policy-wise, “Trump before Trump.” But the two never got along in government, and Sessions wasn’t long for the administration, to the horror of the paleoconservative right.

On North Korea, Bolton continues to pursue the policy course he’s publicly advocated for since taking the helm at the NSC: the so-called “Libya model.” Foreign policy watchers widely suspected that Bolton was attempting sabotage of detente when he uttered the phrase in 2018—the Noriega in the North surely doesn’t want to end up extrajudicially murdered like Muammar el-Qaddafi. But a more likely explanation abounds, say those in his NSC: he believes it. Bolton hasn’t given up on the aughts conservative magic: despite working for a president who rejects his Republican predecessor. Bolton to this day defends the Iraq invasion, and Qaddafi’s correspondent deweaponization.

Forget the rest. Bolton’s plan for North Korea is similarly ambitious, if ridiculous: not just denuclearization, but biological and chemical weapons. “The United States can afford a hitch in talks,” said Benjamin Friedman of Defense Priorities. “We have little to lose. With or without a deal, U.S. security vis-à-vis North Korea is already guaranteed by deterrence and North Korea's relative weakness.” Tell that to the official who authored the legal case for striking North Korea nearly a year ago.