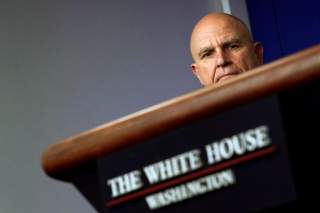 Exit signs continue to blare for H. R. “I have a job” McMaster, Donald Trump’s beleaguered National Security Advisor. On the ropes since August, the leader of the National Security Council tried to insist earlier this week that the talk was little more than piffle. “I have a job,” McMaster said from the White House. "It's a tremendous job every day to advance and protect the interests of American people and to do my best to provide options to our president — and once he makes decisions, to assist with the execution of those decisions."

Little more convincing than President Trump’s “Rex is here” statement following December's brouhaha instigated by an administration-planted story in the New York Times that Tillerson was a political dead man, McMaster’s statement did little to swat down rampant internal speculation that this may be finally it. On the minds of many senior administration officials—namely Tillerson, McMaster and National Economic Council Director Gary Cohn (who has cut an omnibus profile in the administration, unusual for his position)—is the desire to stay at least one year. At stake is both pride, but also a lot of money. “There’s a law that allows members of the executive branch to sell and diversify any concentrated stock positions they have and not pay (defer) the capital gains taxes they would otherwise owe upon the sale,” explains one experienced financial advisor in New York who is very familiar with the process. “This is what [former Treasury Secretary] Henry ‘Hank’ Paulson did with all his Goldman stock. For ex-CEOs, it saves them ten or hundreds of millions of dollars.” Cohn, who is with the president in Davos, has hit that one-year mark. He may leave after returning from Europe.

Who would replace McMaster? A leading candidate is John Bolton, the Fox News staple, former UN ambassador, veteran defense intellectual and avatar for Mustache Magazine. His influence in the White House hit a nadir in August—when he publicly complained that he couldn’t get a meeting with 45. But since then he’s mounted a vociferous internal comeback. His plan to exit the Iran Deal, penned in National Review (which backed him for Secretary of State in 2016) late last year, was feted in the White House, though as of yet, not fully implemented (though the president has put the JCPOA on a deathclock). As I reported in 2017, that plan was written at the behest of former White House chief strategist Steve Bannon, and hailed by hawkish hardliners like Frank Gaffney. Though Bannon’s relationship with the president is, of course, now more fraught, his ally Bolton continues to receive positive press in many of the nationalist-populist staples. Today’s headlines on him are: “WATCH — Amb John Bolton Eviscerates Sky News’s Kay Burley Live: ‘You Are a Munchkin in the Media’” in Breitbart News and “John Bolton Says Trump Is Taking ‘America First’ into ‘the Lion’s Den’ in Davos” in LifeZette, the Laura Ingraham project.

Bolton is “a smart, highly-competent, nice guy,” says a former State Department official from the George W. Bush administration. According to the official, “his worldview is utterly lacking in empathy.” “Whip smart. Few people understand the burr as well as he does. Much of his grating personality is intentional, but he’s like a foreign policy version of Newt Gingrich. His chief concern is power,” says another former State Department official under Bush 43. Julius Krein, editor of American Affairs, who once ran The Journal for American Greatness (JAG) together with Michael Anton, now a senior National Security Council spokesman, is a fan of Bolton.

Whither McMaster? Still active duty, he’d move within the army, according to several sources in the Pentagon, likely the Asia Pacific, where he’s cut his teeth—as the administration’s leading North Korea hawk. But there is a holdup. “One of the problems,” says a defense source. “Is that there is no four star slot open.” It’s possible McMaster was considered for another position in the army before—heading up the mission in Afghanistan—but a source tells me that was nixed by Defense Secretary Jim Mattis. But this would make sense for this administration, who have fired people by promotion before. Think K.T. McFarland, the former deputy of National Security Advisor to Michael Flynn, who was to be shipped to Singapore as ambassador (but that’s been stalled by the broader Russia probe).

Not everyone on the Trump-sympathetic Right would be happy with a Bolton ascension. Scott McConnell, founding editor of The American Conservative, reacted with horror when Bolton was floated during the transition in 2016. “I shudder to think what would happen if we had a failed presidency,” McConnell told a Washington crowd in November that year, shortly after the election. “I mean, John Bolton?” Now he may be back.