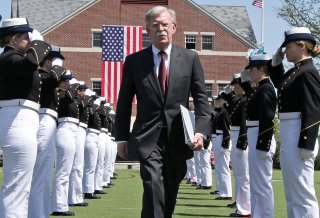 Unlike his famous forebears, he didn’t end a war, nor did he negotiate a peace, sound the alarm on a gathering threat, or make any deep mark on diplomacy. Timing and presidential temperament create these historic opportunities; Bolton either didn’t see or seize them or the nature of the Trump White House did not allow an advisor to act alone on the team sport of U.S. foreign policy. This sense of disappointment is the background music of his book.

Bolton, though an honorable man, carries nothing into history with his name on it—except a book that breaks new ground in allegedly exposing state secrets and presidential confidences. And the book appears not only during the current presidential term but some 135 days before a close-fought presidential election. Other advisors had waited until a president was safely past reelection or a president had left office altogether. So, the one historic precedent that Bolton has set will bring him little honor.

The Trump campaign and its surrogates will tirelessly remind the public of Bolton’s championing of the Iraq War, which the president sees as a costly misadventure. Less partisan minds may admit that it is too soon to judge a war that did create a rough, multi-party democracy and enjoy a near tripling of its economy’s size since 2003, according to the Paris-based Organization for Economic Co-Operation and Development (OECD). If Iraq withers into a Teheran-led puppet state or succumbs to extremism on its own, then the war’s critics will be right. If Iraq soldiers on, peacefully changing parties in free elections and finding its economic feet, then it’s critics will seem small. It is, from my perspective as an Arab publisher living in Casablanca, simply too soon to say.

The real goods on Bolton lie elsewhere and in four parts. First, there is his tenure as national security advisor. Second, is the completeness of the record he presents in his book and interviews. Third, there is his history as a partisan critic of presidents, especially Obama. Finally, there is the likely foreign-policy fallout of his book, which undermines an administration he was once sworn to uphold.

While Bolton had few accomplishments, there are several cases where his ardent advocacy might have been dangerous if followed. Consider how he urged the president to bomb Iran, which Trump veered away from only hours before the bombers were set to fly. Or consider his hawkish advice regarding North Korea, which might have reignited the Korean War.

How complete is Bolton’s record of history? It is hard to say since he refused to testify under oath during the U.S. House’s impeachment inquiry when it might have changed history. In his book, he has much to say about the Ukraine matter. But when the world needed to hear it and he might have imperiled his White House post, he was silent. Now, as a disgruntled former employee, it is hard to credit his account. His words might have once been seen as brave honesty but now they seem peevish and vengeful. Timing tends to color perception.

Bolton’s criticism of Trump, though based on personal experience, is soft compared to his criticism of Obama as “inattentive and terribly naïve. He has taken the path of least resistance abroad and the Russians have moved in and filled the strategic background.” This March 2014 criticism, and many others like it, is broadly similar to what he now says about Trump. Maybe no president is tough enough for Bolton.

Yet his criticism of Obama set up a chain of circumstances that led to his hiring by  Trump. It is hard to escape the idea that Bolton, at least partly, criticizes presidents for personal advantage.

Chinese state-run news services immediately disputed Bolton’s published contention that its trade negotiations were designed to help Trump win reelection. At the very least, Bolton’s book has complicated trade talks when U.S. farmers are desperate to export food to China and recover from the coronavirus.

As for Israel, Bolton’s account in casting Trump as an unreliable friend of Israel is at odds with the president’s own actions: He moved the U.S. embassy to Jerusalem, formally recognized Israel’s annexation of the Golan Heights, and supported it’s right to build new settlements in the West Bank. It is hard to imagine a more pro-Israel president. Bolton doesn’t say—and it is hard to imagine—what significant policies remain unchecked off of Jerusalem’s list.

Bolton’s only substantive complaint is about his frequent antagonist in the West Wing, Jared Kushner, the president’s son-in-law. It was Kushner who wisely asked Israel to limit its construction in the Jordan Valley since it could topple the Hashemite kingdom of Jordan, which has a large Palestinian population. Destabilizing the Middle East is simply unwise and failing to further antagonize the Palestinians is no flaw.

On balance, Bolton’s book makes the Trump White House look wiser for not heeding his advice.

Ahmed Charai is a Moroccan publisher. He is on the board of directors for the Atlantic Council, an international counselor of the Center for a Strategic and International Studies, and a member of the Advisory Board of The Center for the National Interest in Washington.