John Mearsheimer on International Relations, Great Power Politics, and the Age of Trump 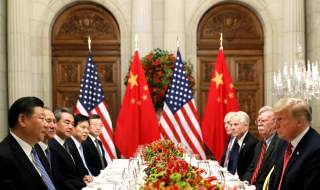 WHEN THE Cold War ended a quarter century ago, many realists expected the United States to retrench and demobilize. Instead, while drawing down some of its military forces, the country did the opposite. The United States waged war to expel Iraq from Kuwait, intervened in the Yugoslav civil war and promoted the expansion of NATO to include Eastern Europe and—many hoped, until Russia violently intervened—Georgia and Ukraine. Following the Al Qaeda attacks of September 11, 2001, the United States not only went to war against the Taliban regime in Afghanistan, but also engaged in “wars of choice” to topple Saddam Hussein in Iraq, Muammar el-Qaddafi in Libya and Bashar al-Assad in Syria, while adding U.S. participation in Saudi Arabia’s war in Yemen. The United States is now engaged in more simultaneous small wars on more fronts than at any point in its history.

In The Great Delusion: Liberal Dreams and International Realities, political scientist John Mearsheimer argues that the disappearance of the constraints imposed by Cold War bipolarity vouchsafed the United States the luxury of trying to reshape the world to conform to America’s domestic political creed of liberalism. Mearsheimer, a professor of political science at the University of Chicago, has written extensively on international relations from a realist perspective, including The Tragedy of Great Power Politics. Now he offers his most sweeping analysis of America’s purpose. Any argument about national and world politics is necessarily schematic. But a catechistic concision which might be a fault in others is a virtue in the case of Mearsheimer, whose prose is as perspicuous as his analysis. Accessible and yet rigorous, The Great Delusion deserves to be read by policymakers, scholars and the public alike.

The gravamen of his argument focuses on the exceptional circumstances that emerged after 1989, when America was not simply primus inter pares but emerged as the sole superpower. According to Mearsheimer,

occasionally a liberal democracy encounters such a favorable balance of power that it is able to embrace liberal hegemony. That situation is most likely to arise in a unipolar world, where the single great power does not have to worry about being attacked by another great power since there is none. Then the liberal sole pole will almost always abandon realism and adopt a liberal foreign policy. Liberal states have a crusader mentality hardwired into them that is hard to maintain.

This has led the United States (the only liberal superpower in history, or one of two, if nineteenth century Britain is counted) to adopt a strategy of liberal hegemony, “in which a state aims to turn as many countries as possible into liberal democracies like itself while also promoting an open international economy and building international institutions.” Mearsheimer writes:

With the end of the Cold War in 1989 and the collapse of the Soviet Union in 1991, the United States emerged as by far the most powerful country on the planet. Unsurprisingly, the Clinton administration embraced liberal hegemony from the start, and the policy remained firmly intact through the Bush and Obama administrations.

Mearsheimer predicts that “liberal hegemony will not achieve its goals, and its failure will inevitably come with huge costs.” The chief barrier to the realization of the dream of a global society of liberal democracies is nationalism, “a particularist ideology from top to bottom.” Consequently, “nationalism and realism almost always trump liberalism.” In recognition of this fact, Mearsheimer argues, the United States should abandon its post-Cold War grand strategy of liberal hegemony in favor of a less interventionist strategy of “restraint.”

Mearsheimer has little trouble demolishing three reinforcing academic theories of international relations invoked after 1989 to justify America’s post-Cold War grand strategy of liberal hegemony: democratic peace theory, economic independence theory and liberal institutionalism. For Mearsheimer, these are rationalizations for a policy whose actual inspiration is to be sought in America’s centuries-old political culture of liberalism.

Much of the book is devoted to a history of liberal political and social thought in the Western world as a whole. Mearsheimer assigns—some might say shoehorns—a number of thinkers into two categories: expansive “progressive liberalism” and “modus vivendi liberalism,” a term he borrows from the philosopher John Gray, who may be surprised to find himself in the same bunkroom in the liberal camp as Friedrich Hayek, Adam Smith and John Locke. Mearsheimer’s emphasis on big-name authors from academic curricula could be criticized for leading him to neglect non-academic traditions like Social Gospel Protestantism, which arguably has had more influence on the attitudes of American liberal Wilsonians.

But these are quibbles. The case against liberal hegemony as a grand strategy for the United States that Mearsheimer offers is compelling. Alas, Mearsheimer’s proposed alternative of “restraint” is unlikely to be adopted for two reasons. The first is the division of realists themselves among rival camps, whose adherents would not be able to agree on a single realist alternative to liberal hegemony. The second is the increasing fusion of geopolitics with geo-economics in areas like trade, immigration and innovation policy, a subject about which American academic realists of all denominations have had little to say.

Mearsheimer defends the school known as “offensive realism” against its sibling rival, “defensive realism.” Offensive realism owes its name, not to the fact that people find it offensive (though liberals, libertarians, Marxists and others do) but to the assertion that states, given the opportunity, are likely to try to maximize their relative power, out of fear that others will do the same, and are justified in doing so. According to Mearsheimer:

Appropriately, Mearsheimer’s earlier summary of offensive realism is entitled The Tragedy of Great Power Politics. This pessimistic vision of world politics as a Hobbesian bellum omnium contra omnes is rejected by many defensive realists. Mearsheimer, for example, alludes to an article by Charles Glaser entitled “Realists as Optimists.” He quotes Sebastian Rosato and John Schuessler defining defensive realism as a “recipe for security without war” and Marc Trachtenberg stating that “power is not unstable.”

The two academic schools of realism differ when it comes to the question of whether a state, given the opportunity, should pursue hegemony, defined as unbalanced or preponderant power in the interstate system. The offensive realist answer is: yes, if you can get away with it. In spite of his critique of liberal hegemony, Mearsheimer is not necessarily against American hegemony or primacy as such. He notes that the rise of China raises the possibility that the United States “would have to compete with a potential peer competitor, a situation no great power wants to face. It would be better to retain the unipolar world, even though it would tempt American policymakers to stick with liberal hegemony.” When it comes to shares of world power, offensive realists agree with Mae West: “Too much of a good thing can be wonderful.” By contrast, defensive realists reject this reasoning, on the premise that any over-mighty power will inevitably be cut down to size by a counter-balancing coalition of other great powers. As evidence, they point to the coalitions that thwarted the bids for European hegemony of Charles V, Napoleon, the Kaiser, Hitler and the Soviet Union.

BUT DOES history really show that attempts to amass disproportionate power are doomed in advance? The rise of the United States would appear to refute this view. In the nineteenth and early twentieth centuries, the British and French did not intervene militarily to prevent the United States from expanding across the continent by defeating Mexico in 1846–48, thwarting Southern secession during the American Civil War and then establishing its own sphere of influence in North America. Following the Cold War, China and post-Soviet Russia sought to boost their power at the expense of the United States, but America’s European and East Asian allies did not band together to balance American power.

When one looks at world history as a whole, rather than focusing narrowly on Europe between 1648 and 1989, the argument that anti-hegemonic balancing is a more or less automatic feature of systems of multiple states collapses. As the British scholar Martin Wight observed, state systems are the exception in history and empires the norm. The Warring States system of ancient China gave way to the Chinese empire. The Hellenistic state was incorporated in Alexander’s Macedonian empire and then, after a period of fragmentation among Hellenistic kingdoms, into the Roman empire—part of which, in the form of the Ottoman empire, lasted until World War I. Arguably the survival of multiple independent states in a competitive state system in Europe was a fluke, owed to the intervention of flanking powers which were themselves not balanced by strong powers—Russia, Britain and later the United States—as the German scholar Ludwig Dehio argued in The Precarious Balance. In other regions, successive rounds knocked out competitors until the last opponent of the power that unified the area was defeated. To the Mae West theory of offensive realism, we might add the Agatha Christie theory of the high mortality rate of competitive state systems: And Then There Were None.