Jordan's Security is at the Mercy of Foreign Powers 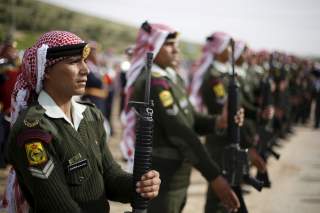 Jordan’s King Abdullah II travelled to Assisi in Italy to receive a reward for his efforts to advance peace on March 29. He said that it was essential the international community understand the importance Jordan puts on being the custodian of Jerusalem’s Islamic and Christian holy sites. “Jordan’s commitment to harmony and peace underlies our international role, our fight against terror and hatred on all fronts within a holistic approach,” the king said. In the wake of Israel’s elections on April 9 and the long-delayed decision by the White House to roll out a peace plan, Jordan’s role is key to any plan’s success and stability in the region.

His speech underpins the policy of the kingdom, a small country with a struggling economy that is also a linchpin of security between Israel, the Palestinian Authority, Saudi Arabia, Iraq and Syria. Jordan recently hosted the World Economic Forum’s Middle East and North Africa meeting and held an important meeting in late January with Arab leaders to discuss the region’s future.

In a trip to Jordan in early April, the kingdom’s challenges were clear. More than 1 million Syrians fled to Jordan during the Syrian conflict and 660,000 registered as refugees with UNHCR. It has the second highest number of refugees per capita in the world. The refugees are poor, with 80 percent living below the poverty line, most in rural areas and 51 percent of the population being children. Many of them do not live in refugee camps, meaning they are present throughout northern Jordan and in Amman, the capital.

Despite the Syrian regime reconquering southern Syria last year, ostensibly offering amnesty to Syrian rebels, and reopening the border, the refugees are not going back. Instead they still require large amounts of assistance. UNHCR provided 132,000 people with cash assistance, 124,000 of them Syrians, in Jordan in March 2019. And this requires funding, to the tune of more than $500 million a year from the United Nations.

It is worthwhile to look at Jordan’s historic role in the region in this respect. In the period up until the 1970s, Jordan was a key player in the Palestinian-Israeli conflict. From controlling the West Bank through 1967, to its crackdown on Palestinian militant groups in in 1970, the kingdom also came to host millions of Palestinian refugees. Since the 1980s things have changed. Jordan and Israel signed a peace treaty in 1994 as part of the Oslo era when it appeared a Palestinian state would come into being.

Since the Trump administration came into office, the king of Jordan and Donald Trump have been in regular contact. Abdullah flew to Washington to meet U.S. officials in January 2017, telling the United States that the defeat of ISIS and the resolution of the Syrian conflict were key issues for Jordan. He was also concerned about Trump’s plans to move the embassy and how to resolve the Israeli-Palestinian conflict. He met with Trump in April and September 2017, and emphasized the importance of confronting terrorism and regional security. Jordan rejected the U.S. embassy decision in December 2017, calling it “null.” More Jordan-U.S. talks were held in June of 2018 and March 2019 to examine the White House’s peace plan. It appears that Jordan has consistently sought a close working relationship with the United States, urging caution regarding U.S. decisions on Jerusalem, while seeking to influence any U.S. peace plan. Towards that end, the Trump administration has paused rolling out the peace plan, waiting for Israeli elections to conclude on April 9, 2019.

Three years ago when I went to Jordan, the kingdom was still at the height of the refugee crises and was the center of a U.S. program to help train moderate Syrian rebels. That program was wrapped up in July 2017. During the period that the United States had embarked on training rebel groups, it had also moved into Tanf (Tanaf), a desert area in Syria near the Jordanian-Iraqi border. Since then that base has had an unclear future. In October, before Trump announced that the United States would withdraw from Syria, General Joseph Votel visited the base. Russia and the Syrian regime have sought to portray the U.S. presence in Tanf as both an illegal occupation of Syrian land and a place of suffering for Syrian refugees who fled to be under the U.S. security umbrella that extends around Tanf.

At the same time, some U.S. policymakers believe that Tanf helps to block Iranian influence. The concept here is that the base, by its very existence, exerts influence around it and thus can help block the Iranian “corridor to the sea.” Iranian-backed militias in Iraq, and Iranian-backed groups in Syria both use the Iraq-Syrian border as a crossing. The United States has struck Syrian militias approaching Tanf. Across the border in Iraq, U.S. forces have faced harassment from Iranian-backed groups. Now that the United States has designated the Iran’s Islamic Revolutionary Guards Corps a terrorist organization and Iran has openly called for the United States to leave Iraq, Tanf and Jordan are of even greater importance to U.S. policy in the region. And Iran is watching: reports in Iranian media say that Jordan won’t take over the Tanf base if the United States withdraws. For now, the United States is poised to leave troops in Syria after the March defeat of ISIS.

Jordan has repeatedly said that it is essential that a “just and comprehensive” solution to the Israeli-Palestinian conflict leads to a two state solution. Jordan also wants to build consensus among southern Arab countries, including the United Arab Emirates, Saudi Arabia, Bahrain, Kuwait and Egypt. Jordan seeks to leverage this group to not only discuss Syria reentering the Arab League, but also to speak out about warming relations between the Gulf and Israel. Jordan was critical of Oman at the World Economic Forum Dead Sea even on April 7, arguing that Israel was occupying Arab land in the West Bank, while Oman has sought closer ties with Israel.

Jordan’s main concern is not just balancing US policy, the post-Syria conflict, and the Israeli-Palestinian dispute, it also wants to find a way forward regarding the Syrian refugees. In conversations with refugees in Jordan in April it was clear that none of them expressed an interest in returning to Syria. One after another of those interviewed said that after initial hopes last year regarding the Syrian regime’s overtures, those who returned were detained and young men were taken away for forced conscription. Many of the refugees have been in Jordan for up to seven years. They have a high birth rate and many of those interviewed said they had one or two children already born in Jordan. That forms part of a large and growing population of Syrians in Jordan.

The Syrians in Jordan mostly come from southern Syria and some have family ties in Jordan. Therefore, they have integrated culturally into Jordan. Jordan has also eased restrictions to allow some to work in certain industries, primarily as menial laborers. The idea is that they should not compete on the labor market with middle class Jordanians. With rents and costs rising at least in part due to so many refugees, the issue of economic competition and resentment is a real one. The local government officials and charitable organizations involved in helping the refugees, such as Caritas Jordan, a Catholic relief organization, repeatedly emphasize that Jordan sees itself as doing its duty to host the refugees who are portrayed as “brothers” of Jordanians.

The larger issue in coming years will be if the Syrians choose to stay for the long term they will create a new, young generation. With around ten million Jordanians, the Syrians make up more than ten percent of the population. Jordan has already faced a smaller crisis after the United States cut aid to Palestinian refugees. It has concerns that UNHCR or other organizations may reduce funding.

The kingdom is a key to regional security in the coming year and U.S. policymakers should recognize and build on that. The king’s position is also consistent and clear. In Italy he expressed support for “a viable, independent, sovereign Palestinian state, on the 1967 lines, with East Jerusalem as its capital, and a secure Israel, fully part of its own region, recognized by Arab and Muslim states around the world.” How the Trump administration chooses to roll out its peace plan, and how Netanyahu chooses to tack after the elections, whether he decides to go through annexing parts of the West Bank for instance, could have major repercussions for Jordan.