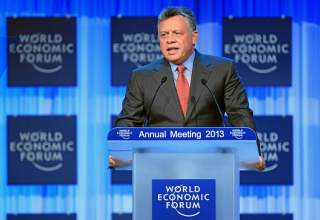 During Jordan’s Army Day ceremony commemorating the Great Arab Revolt at the beginning of June, King Abdullah II incited debate in Jordanian media when he unveiled not the country’s official flag, but a crimson banner bearing the Islamic declaration of faith, blessings and seven-point star. This flag, a centuries-old Hashemite banner, was presented by the Royal Court to signify Jordanian “freedom, unity, independence and the rejection of violence, terrorism and extremism.” While this narrative may emphasize Jordanian unity amid tumult in its neighborhood, it tacitly admits the palace’s growing fears of domestic insecurity.

Jordan depends on foreign aid and remittances to maintain fuel and food subsidies, public services, and economic controls necessary for the preclusion of popular unrest. Any decreases in this external assistance jeopardize the tenability of the political system. State overreach has crowded out the growth of a viable and independent private sector, hindering opportunities for job creation. The monarchy’s long-standing social contract—the government provides Jordanian tribes and local business elites with public sector employment, financial support, and other forms of patronage (wasta) in exchange for loyalty to the regime—has faced heavy pressure from Palestinians, who constitute over half of Jordan’s population but are confined to the private sector. At the same time, Jordanians have perceived neoliberal economic reforms, designed to reduce the state’s role in the economy, as threats to their economic security and signs of government abandonment.

Institutional and legal reform is needed in Jordan, yet the measures put in place by the King in the wake of the Arab Spring—increased subsidies, dismissal of the cabinet, and a National Dialogue Committee for recommending reforms—were only temporary and cosmetic fixes that do not adequately address the country’s key power structures. King Abdullah II recognizes the necessity of reform for long-term political survival, but appears unwilling to take the political risk. He has blamed “inside” forces, mainly tribal “dinosaurs” and his “problematic” mukhabarat, for flouting his repeated calls for new election and political party laws and anti-corruption measures, despite the fact that the King possesses nearly absolute power vis-à-vis the Parliament. On the international level, wars in Syria and Iraq and the spread of extremism throughout the region have led the palace to pursue a “security first” policy.

Despite the temptation to prioritize short-term survival ahead of long-term structural changes, the monarchy should not delay needed reforms in the name of national security, nor should it wait for renewed public pressure to force the government’s hand. The government should not consider security and reform as mutually exclusive objectives, but as complementary tools for bridging a widening gap between the state and street, and stemming the growth of jihadist groups in Iraq and Syria. Ongoing bloodshed in Syria has deterred Jordanians from renewing protests, which gives the sovereign time and breathing room to inaugurate politically risky reforms.

Moreover, a survey conducted in February 2015 by the Center for Strategic Studies at the University of Jordan found that 74 percent of Jordanians believe that their country is “generally going in the right direction,” up from 51 percent in December 2014, while 74 percent believe that the government has been able to carry out its responsibilities and 89 percent consider Jordan’s security situation “good.” These results, collected after ISIS’s immolation of Jordanian pilot Muath al-Kasasbeh, indicate that Jordanians have a relatively high level of faith in the government despite economic and social grievances. The monarchy should take advantage of this support in pursuing the first steps in what is bound to be a painstaking and intensive process.

The government should first revisit the National Dialogue Committee’s recommendation to reduce the number of members necessary for the establishment of a political party from 500 to 250. Political parties should be additionally supported by increasing the percentage of parliamentary seats that are elected from nation-wide political party lists. These measures would strengthen political parties, a historically weak force in Jordan, and encourage representation based on policies rather than patronage networks. A new elections law passed in 2012 modified the “one person-one vote system” slightly by reserving 27 seats for election through proportional representation voting for national lists, including political parties, but has fallen short of meaningful change by saving the majority of seats for the “one person-one vote” system that disproportionately benefits rural tribes at the expense of Palestinians and urban areas.

These measures would undoubtedly trigger backlash from the tribes, so the monarchy should seek a compromise with leaders in the governorates, perhaps one that decentralizes service delivery from Amman to the provinces so that tribal leaders maintain some control over resource distribution. The government has also avoided meaningful changes to political party laws due to fears over widespread Islamist party support, but this merely prolongs the inevitable: mounting pressure from groups that are forced to work outside the political system. Rather than wait until the last possible moment, the monarchy should undertake early reforms that slowly and proportionately integrate youth and political parties into the political system so that they have a real stake in the government.

In addition, the government should abrogate the 2012 Press and Publications Law, which gives it control over the registration and licensing of news websites, and the 2014 Anti-Terrorism Law, which broadened the definition of terrorism to permit it to silence political opponents, primarily Islamists. Keeping a permanent lid on freedoms of press and expression only creates a bottleneck of popular anger that will eventually explode. Lifting restrictions in a gradual manner, however, would allow the regime to adjust quickly to domestic and regional events while still allowing a controlled but nonetheless legitimate political space for critics.

King Abdullah II should not view regional turmoil and domestic stalemate as barriers to reform, but instead as reasons to initiate the reform process sooner rather than later. The earlier the monarchy recognizes this, the more control it will have over the pace and direction of reform and securing Jordan’s future.