Jordan’s Water Woes Are a Wellspring of Mideast Strife 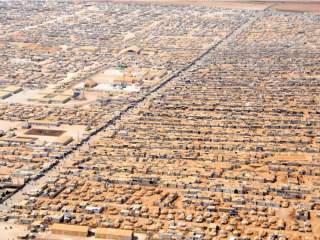 Water scarcity defines life in many parts of the Middle East. But careful water management and technological advances have created some previously unimaginable pockets of water security. Israel, for example, combined proactive conservation, desalination and wastewater recycling to produce a water surplus last year. Jordan, too, has managed to provide its citizens with nearly universal (if intermittent) access to drinking water. This stability, however, is fragile, and is increasingly threatened by spillover from the Syrian civil war.

Jordan’s water management record is a case in point. Nearly everyone in the country has access to drinking water sources and sanitation. King Abdullah II has put sustained effort into developing the country’s water supplies. This has yielded some mega-projects, including the billion-dollar Disi Conveyance Project completed in 2013, which brings groundwater from the Disi aquifer in the south to the cities in the north, through 210 miles of pipes. Yet water continues to be rationed there, as it has been since the 1980s. In many places, even large cities like Amman, it is available only about once every week to twelve days.

Moreover, Disi groundwater is what is sometimes referred to as “fossil water,” since it comes from an aquifer that refills on geologic time, making it effectively non-renewable. As a result, Jordan is pumping an unsustainable amount of water out of its aquifers, and is doing it at rates that are among the most unsustainable in the world. Making matters worse, Jordan’s infrastructure has chronic leakage problems, losing 40 to 75 percent of the water it extracts before it can be used.

In an effort to face these problems, Jordan’s 2009 National Water Strategy proposed a comprehensive set of reforms to handle the projected 7.8 million Jordanians expected to be living in the country by 2022. The influx of refugees from neighboring Syria has crippled those plans by bringing Jordan’s population to nearly 8 million this year.

The surge of Syrians into Jordan creates a broad set of new problems, such as pollution and new tensions between refugees and host communities. There are likely over one million refugees in Jordan, and while some are in camps, including Za’atri—now the largest refugee camp in the world and Jordan’s fifth largest city—many have settled in northern cities. These locations present somewhat different water-related challenges. Water must be transported to the camps, which is an expensive logistical challenge in a place where necessary infrastructure is scarce to non-existent. A sharp increase in the urban population, on the other hand, risks over-taxing the water delivery and sanitation systems. The Ministry of Water and Irrigation has noted serious reductions in the ability of cities to treat wastewater that threatens to degrade sanitation. Because water cannot be cost-effectively imported in bulk, these sudden changes have meant accelerating the extraction of a limited and dwindling resource.

Water insecurity is both an effect and cause of conflict in the region. Widespread crop failures and huge livestock losses between 2006 and 2011 encouraged increasingly food insecure farmers to flood economically-depressed cites where they found little besides unemployment. Poor water management and climate change are root causes of these sorts of migrations, and a violent political response transformed them into the ongoing civil war.

The Syrian government, long before the conflict began, encouraged the overexploitation of groundwater for agriculture by subsidizing water-intensive crops, like chickpeas, lentils and cotton. Often these crops are grown in water-inefficient ways. This is, unfortunately, common practice the world over, and it avoidably increases the risk of future scarcity-conflict cycles. High overexploitation rates produce short-term production gains for individuals at the expense of long-term collective resilience.

We should expect increasing conflict between states over water sources since hydrologic boundaries frequently cross political ones. The Disi aquifer, for example, is almost entirely underneath Saudi Arabia. This leaves Jordan with no significant sources of water of its own.

Recent cooperation between Jordan, Israel and the Palestinian Authority on the Red Sea-Dead Sea plan to desalinate water, generate hydropower and try to reverse the disappearance of the Dead Sea is encouraging. Whether the project is feasible is another question. Shocks of droughts and refugees, woven into a complex web of political mistrust, make negotiation difficult.

Addressing cascading environmental-political crises requires a longer view and a strong investment in helping the water-poor parts of the Middle East achieve water security. Mercy Corps and USAID have made some notable progress in supporting programs focused on refugees, but foreign investment has been inadequate to the massively expensive project of regional water sustainability.

The water-related costs of absorbing the refugees are estimated at about $700 million for Jordan alone. Regional stability requires even more. The Red Sea-Dead Sea project is too expensive for any of the individual countries involved to fully fund and manage. And investing in mega projects to source water is, even by Jordan’s own analysis, insufficient to provide what it needs over the long term. It also frequently comes with substantial environmental consequences.

A comprehensive strategy would include systematic improvements in water-efficient agriculture—drip irrigation and better crop choices—which requires education and technical support. It would require repairing infrastructure to reverse the dramatic loss of water to leaks. And it also means more effective government monitoring and enforcement of good agricultural practices, including discouraging illegal wells. We should not be Pollyannaish about the effort required here. However, if we’re serious about building security for the Middle East, then the boots on the ground should include many engineers and agricultural experts.

The United States and Europe should encourage the development of comprehensive water strategies for every major watershed in the region. This has been attempted before. The 1950s Jordan Valley Unified Water Plan was ultimately rejected by the Arab League following the Suez Crisis (though large parts of it were adopted by both Israel and Jordan). Contemporary plans must ultimately be presented by the countries concerned and with wide transparency to avoid the perception that they are simply vehicles for foreign exploitation.

Water resources in places like Jordan are even more threatened than they were before. We have some tools to address these problems, but they require a broad base of cooperation and planning. Following the COP21 climate conference, leaders would do well to connect the policy links between climate change, resource consumption and political instability. Agreements reached there are, in a very real sense, peace negotiations, as there is no path to lasting political stability in the Middle East without improving its water stability.

Michael Tiboris is a Global Cities Fellow at The Chicago Council on Global Affairs and a Public Fellow for the American Council of Learned Societies.