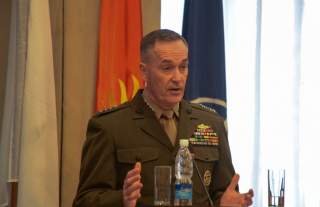 On July 9, Commandant of the Marine Corps General Joseph Dunford will face the Senate Armed Services Committee (SASC) for his nomination hearing to be the next chairman of the Joint Chiefs of Staff. Despite his short time at the helm of the country’s “9-1-1 force,” and the fact that he would only be the second Marine to be the president’s top military adviser, he has earned President Barack Obama’s “trust.”

And he seems to have the trust of the SASC’s leadership, too. Chairman John McCain said “Dunford’s exemplary service in Iraq and Afghanistan makes him a strong choice" to be the next chairman. The Committee’s Ranking Member, Jack Reed, has the “utmost confidence that General Dunford will serve with distinction as the next Chairman.”

It is therefore reasonable to assume that Dunford will soon take over for General Martin Dempsey. So, what should we expect from Dunford in this new role? Based on his service as commandant, we should expect him to focus on “readiness”—in multiple meanings of the world—to turn into his organizing principle.

Ready America for a challenging world: Dunford’s “Planning Guidance” claimed that “the current operating environment is volatile and complex,” citing challenges such as “the proliferation of modern conventional, asymmetric, and cyber weapons, violent extremism, transnational crime, and piracy.” Adding to this instability is “water, energy, and food scarcity, weak governments resulting in ungoverned spaces, territorial and tribal disputes, and regional competition.” As he faced these challenges as commandant, he asked his Marines to be “ready, relevant, and capable” (emphasis added), and made significant changes to ensure this would be the case.

He planned for “distributed operations, both at sea and ashore,” which would allow the Marines to react more quickly to potential conflicts in Asia alongside their allies and partners. Indeed, according to Dunford, “distribution will provide us more effective theater security cooperation.” While this does expose the service to logistical risks, it made sense to ensure Marines could “fight today,” regardless of the location of the flashpoint.

The general also changed the way Marine leadership commands in important areas like Europe and Africa. Currently, the Marine commander in the Americas is based at Camp Lejeune, North Carolina, and the Marine commander in Europe is based in Norfolk, Virginia. The changes, scheduled to be instituted this month, would place a one-star commander in Miami to lead Marine Corps operations in the Caribbean and Central and South America, and a two-star commander in Germany to lead operations in Europe and Africa. This restructuring not only put higher-ranking leaders in charge of these important forces, but also locates them where they can have in-theater experience and greater impact.

These changes provide insight into how Dunford will prepare the U.S. military to deal with coming challenges: have our forces work with allies and partners to solve local problems, and put them near or in areas of potential conflict—Europe, Africa, and Asia—for rapid response. But of course, there is more to the chairman’s job than high-level military strategy.

Ready the right advice: Dunford is regarded by those who know him as “an operational artisan” and a “talented politician.” During his time commanding American and NATO forces in Afghanistan, he earned a “reputation for being as attuned to political currents as he [was] to the complexities of insurgent combat.” This seems to be true. He “impressed” President Obama “during hundreds of hours of secure video conferences, and an easy rapport developed between the two men,” according to The New York Times.

More impressive, though, is the fact that Dunford earned the president’s respect and trust even when they vehemently disagreed on one of the biggest issues regarding Afghanistan: the drawdown. In a letter to the SASC, Dunford thought that the United States “should continue to validate the assumption and assess the conditions on the ground as the drawdown [took] place.” He would go even further when testifying to the SASC: “A withdrawal, in my mind, means abandoning the people of Afghanistan, abandoning the endeavor that we’ve been here on for the last decade, and then providing al-Qaeda the space within which to begin again to plan and conduct operations against the West.”

This stance conflicted with the Obama administration’s troop withdrawal policy, one that the president has subsequently slowed down. Despite the differences, Obama reportedly “admired how General Dunford delicately made the case to keep as large a force as possible in Afghanistan for as long as possible,” while still managing to “leave everyone with the impression that he respected the president,” according to a U.S. official who spoke to the New York Times.

Even in this singular case, one gets a sense that Dunford will give his unvarnished military advice, regardless of the president’s stance or initial thoughts on the matter. Dunford will ensure that he is ready to give the necessary council so that this president, and likely the next, can implement effective foreign, defense, and military policies. He will do this with a keen sense of the politics and in a way that will still earn him the ear of the Commander-in-Chief and those around him. Should he be confirmed, Dunford’s skills and expertise may make him a very powerful chairman over the next four years.

Ready America’s troops: Dunford says that “readiness remains our number one priority to meet our national security responsibilities,” so he believes that “the United States must maintain a force-in-readiness.” While he was referring to the Marine Corps, there is no reason to assume that he would drop readiness as his top issue as chairman. His sense of “readiness,” though, seems to be more expansive than the normal definition of how capable troops are in a fight. For example, Dunford supports having women in combat positions so that anyone who can serve in that tough role is able to do so. He also cares that current Marines stay in the ranks and continue to build their leadership potential, which would not only benefit the individual Marine but also increase much-needed leadership in the Corps. Similarly, he highlights the need to fix barracks and the imperative to improve the deployment-to-home-assignment ratio. Dunford believes that these poor conditions are part of the reason why many Marines leave the service and why the Corps now has a leadership and expertise crisis in the non-commissioned officer cadre.

Dunford also made the case that the Marines will not be as ready to fight if they do not have a modern arsenal. Newer equipment would help the United States deal with conflict in the littoral areas, where he thinks much of future conflict will take place. He emphasized the need for, among other systems, the Amphibious Combat Vehicle and Joint Strike Fighters. Ensuring the acquisition and consistent upkeep of these systems allows Marines to be ready to fight with (in theory) the most advanced equipment available. Taking these points into account, it is evident that his desire to help Marines at the individual, familial, and professional levels shows Dunford’s commitment to readiness in more than just the traditional metric.

All of the above, of course, is a projection. There is no telling how bureaucratic politics and a famously close-knit executive branch will change the way Dunford can conduct his business. Further, based on the world’s complexity and constant change, the scenario today may be completely different from the military scenario a few years in the future. (Indeed, notice the global context difference between the 2011 National Military Strategy and the just-released 2015 version.) However, Dunford’s recent career shows a general who is confident in his abilities and who knows what he wants: an America ready for a tumultuous world; troops ready for the fight; and himself the best and most ready he can be. Only time will tell how he does by those metrics.