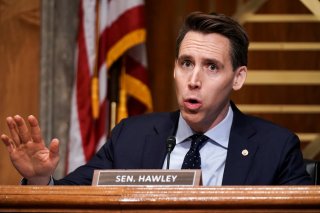 Sen. Josh Hawley (R-Mo.) announced Wednesday that he will object to the electoral vote certification when Congress convenes next week to count each state’s electoral votes to cement President-elect Joe Biden’s White House win, a push that is unlikely to succeed as several Senate Republicans have already acknowledged Biden’s victory.

Hawley is the first—and so far the only—Republican in the Senate to formally challenge the election results when lawmakers on Capitol Hill join to count the votes from each state, a move that Senate Majority Leader Mitch McConnell (R-KY) and other top GOP leaders have discouraged their colleagues from doing since it can be politically harmful and damaging to the party. Many House Republicans, however, have declared their commitment to disputing the presidential election results, led by Rep. Mo Brooks (AL), who was the first member of the House to contest the results once Congress certifies the electoral vote.

“I cannot vote to certify the electoral college results on January 6 without raising the fact that some states, particularly Pennsylvania, failed to follow their own state election laws,” Hawley said in a statement. “At the very least, Congress should investigate allegations of voter fraud and adopt measures to secure the integrity of our elections. But Congress has so far failed to act.”

The Missouri Republican was joined by Rep. Jefferson Van Drew (R-NJ) on Wednesday, as he announced he will not vote to certify Biden’s win.

“I won’t be voting to certify the electors,” Van Drew, who was elected as a Democrat but switched parties last year when he signaled his support for Trump, told The Press of Atlantic City. “It’s what I’ve talked about all along. There has been ... a disrespect of millions of Americans who really do believe that something’s wrong. It’s not a matter of who would win or lose—maybe the results would be the same—but we should abide by the rule of law.”

House Speaker Nancy Pelosi (D-CA) also emphasized on Wednesday that she has “no doubt that on next Wednesday, a week from today, that Joe Biden will be confirmed by the acceptance of the vote of the Electoral College as the 46th president of the United States.”

Biden spokeswoman Jen Psaki told reporters on a conference call that, “Regardless of whatever antics anyone is up to on January 6, President-elect Biden will be sworn in on the 20th.”

Psaki’s remarks are correct, as Trump will likely lose the certification.

House members must be joined by at least one member of the Senate, who can then challenge the electoral college votes on Jan. 6, initiating a floor debate and vote within each chamber. But with Democratic control of the House and multiple Senate Republicans coming forward to congratulate Biden on his win, the president will likely see another brutal election defeat. Even if Trump were to win the Senate vote, with Vice President Mike Pence presiding over the upper chamber and could be the tie-breaking vote, the challenge would collapse since the House will back Biden’s victory.

The efforts by Hawley and other GOP lawmakers that involve baseless claims of voter fraud will only drag out the legislative process for pledging Biden’s win, making Trump’s defeat even more painful to the durability of the Republican Party.

All of this congressional chaos has Republicans worried for the future of the GOP, as Sen. Lindsey Graham (R-SC), a close Trump ally, even said contesting the results would “probably do more harm than good.”

Prior to Hawley’s announcement, only one incoming Republican senator, Tommy Tuberville of Alabama, chimed his consideration on signing the electoral vote resistance.

Hawley’s decision to side with the president’s voter fraud plea could be a political move, as he’s considered one of the many Republicans floating in the pool of 2024 presidential candidates.