July 4th Nightmare: What If America Lost the War For Independence? 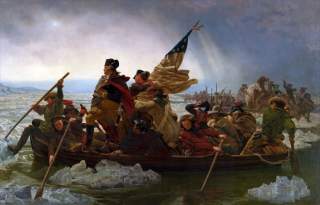 What if America’s most patriotic holiday was not July 4, but December 25?

It could have been the day the British crown got its best Christmas gift ever. All it would have taken was a simple slip by a colonial rebel. His rifle, crashing to the frozen ground, discharges… the shot echoing clearly through the crisp, clear winter night. On the river banks, the alarm sounds. The Hessian garrison at Trenton rouses to its posts. Washington’s troops are trapped crossing the Delaware.

The British counterattack drives the rebel forces from their encampment at Valley Forge. George Washington is captured. The Continental Army evaporates. The rebellion is crushed. What would life be like today, in a world in which there never was a United States of America?

There are a multitude of quite plausible scenarios in which the colonials might have lost their war with the mighty British Empire. After all, Washington’s strategy was to win by not losing. The aim was to hold on until the British gave up or the French stepped in. That strategy frayed nerves repeatedly at the Continental Congress—from the retreat at Long Island to the near disaster at the Battle of Monmouth, to Benedict Arnold’s betrayal at West Point. Washington came too close to losing his army on more than one occasion.

If, in any these instances the Continental Army had been destroyed—not just defeated—would anyone today be celebrating the signing of the American Declaration of Independence? The answer, most likely, is yes. But the path to independence would have been far bloodier—for both nations. Here is why.

Oddly, American independence worked in Great Britain’s favor. In practical terms (and Canada aside) Washington’s triumph gave the crown one less continent to worry about in its decade long struggle with France for the mastery of Europe. With the American Revolution ended, the pushy colonials looked after themselves and stopped trying to snag Canada. Better yet, they were pretty good trading partners. All this was to the good for the crown, because the British could focus their energies on the looming life-and-death scrap with France.

Now, let’s replay the tape. Instead of America being a non-issue, the British win and are forced to treat the defeated colonists like a garrison state. Decades of endless guerilla warfare follow—draining the British treasury.

And, make no mistake—even if the French had not dropped a lot of cash helping out the colonial cause, Louis was probably headed for the guillotine sooner or later anyway—and then came the real threat: Napoleon.

In this situation, North America becomes a major theater of conflict in the Napoleonic wars, not just a sideshow. No longer a struggle between freedom and tyranny, it is a war for supremacy between two imperial powers. It’s the kind of war in which the blood really flows. Everywhere. And in the New World, the resulting brawl for supremacy would have made the French and Indian Wars look like peace talks.

When all the killing was done, America would still have been somebody’s just another bloodied colony. And worse, the rest of the world might not have made out any better. Maybe, Napoleon would have never had his Waterloo.

Yet, sooner or later liberty would have triumphed. John Locke, Patrick Henry and others had already lit the fire of freedom in the minds of men. The principles of natural law and natural rights had been articulated, succinctly and supremely in the Declaration. It was a document that could not be forgotten, even in (temporary) defeat. There is little likelihood that the flame of freedom that it sparked and fanned could ever be fully extinguished.

Want proof? Well, the idea of liberty did survive Napoleon, and the American Civil War, and the Great War, and Hitler and more. Freedom is hard to kill. And, eventually, America would have had its 4th of July in one form or another.

But, I like this form: a great nation that reaches from sea to shining sea; an exceptional nation that serves as an example to all of the world that sovereignty of the people is not just novel idea, it is the salvation of mankind.

With all its warts, with all its stumbles forward and all its backsliding, America still shines as a beautiful and noble idea. I am glad General Washington won at Trenton, that he prevailed at Yorktown, and that Independence Day today stands for something that is worthy of our admiration.

James Jay Carafano is a vice president of The Heritage Foundation, where he directs the think tank’s research in issues of national security and foreign relations.