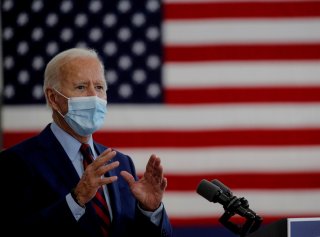 In an echo of President Warren G. Harding’s campaign a century earlier, Joe Biden has promised Americans a return to normalcy and, on matters of foreign policy, has cast himself as the ultimate anti-Trump—building bridges where Donald Trump has needlessly burned them; embracing multilateralism where Trump has espoused only “America First”; and striving for strategic clarity where Trump has produced only incoherence. But after four years of shifting geopolitical sands, what exactly would a return to normalcy even resemble? Does the former vice president simply mean a restoration of professional competence and stability in the White House? Or are he and his foreign policy team trapped in a nostalgic view of the past that will damage rather than boost American security?

If personnel really do equal policy—as the old saying goes—it is the advisors surrounding Biden who will have an outsized influence on his foreign policy decisions once in office. In July, Foreign Policy reported that the Biden campaign had amassed a network of over 2,000 foreign policy advisors, organized into twenty working groups and dozens of subgroups. Unnamed sources in the campaign have suggested, however, that this sprawling apparatus acts less as a serious policy-making tool than as window dressing intended to “get people on board” with the Biden team, especially those in the progressive wing of the party.

True authority still lies firmly within Biden’s small inner circle of loyalists—all of them veterans of the Obama and Clinton administrations, whose records in foreign policy were checkered, at best. These figures are associated with the Obama administration’s ill-fated foray into Libya and its failure to reach any real reset with Russia, among other things. As Stephen M. Walt observed, while Obama notched a few successes such as the opening to Cuba, his

“presidency is in other respects a tragedy — and especially when it comes to foreign policy. It is a tragedy because Obama had the opportunity to refashion America’s role in the world, and at times he seemed to want to do just that. The crisis of 2008-2009 was the ideal moment to abandon the failed strategy of liberal hegemony that the United States had been pursuing since the end of the Cold War, but in the end Obama never broke with that familiar but failed approach.”

With Biden, it appears to be back to the future. Foremost among Biden’s advisers is Antony Blinken, who has worked closely alongside the former vice president for the better part of two decades. Blinken first joined then-Senator Biden in 2002 as a staff director and advisor on the Senate Foreign Relations Committee. He then followed Biden into the Obama administration where he served as National Security Advisor to the Vice President in 2009-13, Deputy National Security Advisor to President Obama in 2013-15, and Deputy Secretary of State in 2015-17. Other insiders include Jake Sullivan—Biden’s National Security Advisor in 2013-14 and a top advisor to Hillary Clinton’s 2016 campaign—as well as Tom Donilon, Nicholas Burns, Kurt Campbell, Colin Kahl, Julianne Smith, Avril Haines, and Michèle Flournoy. Flournoy is widely considered to be a top contender for Secretary of Defense and currently serves as a managing partner at WestExec Advisors, a strategic consultancy that she co-founded with Blinken in 2018. The American Prospect describes the Washington-based firm as a key revolving door between the former Obama administration and the Biden campaign.

Voices on the progressive left and populist right have predictably—and justifiably—decried what they view as a discredited foreign policy establishment yet again taking on the reins of government, seemingly unchastised by three decades of hubris and misadventures, whether in the Balkans or the Middle East. In the weeks leading up to the Democratic National Convention in August, more than 275 delegates—most of them pledged to Senator Bernie Sanders of Vermont—blasted the Biden team in no uncertain terms as a “horror show,” denouncing their long track record of “poor judgement” and “disastrous” military interventions. Unwilling to learn from past experience, these critics hold, figures like Blinken and Sullivan would likely continue American adventurism abroad in the name of democracy.

There has been an evolution of sorts among Biden’s advisors on a host of issues. They now promise to wind down America’s “forever wars” in the Middle East and to “rebuild” democracy at home rather than crusade for it abroad. They concede that China’s rise is inevitable and make the case for American “humility”—seeking neither to transform China nor to isolate it, but to pursue careful management of the relationship. Biden advisor Colin Kahl now admits, “great-power competition is back.” The defiant ascent of figures like Xi Jinping and Vladimir Putin has forced an uncomfortable awareness that, as William Burns writes, “America can no longer dictate events as we sometimes believed we could.” More fundamentally, they argue that America’s greatest challenges are global in scope (think climate change and the ongoing pandemic) and can only be met through working closely with allies.

But the Biden campaign’s central promise—to “restore” American leadership in the world—would likely undermine them all.

The Trump presidency has forced the foreign policy establishment to reconsider many of its prior assumptions, but it crucially has failed to shake their core conviction that America must always and everywhere lead. “Joe Biden would reassert American leadership,” Blinken insists. “Whether we like it or not, the world just doesn't organize itself.” Sullivan likewise reaffirms his belief in “American exceptionalism.” Even if it finds itself less powerful than before, he writes, the United States will always possess “a unique capacity and responsibility to help make the world a better place.” As Biden’s advisors see it, the key problem with U.S. foreign policy is not the belief in American exceptionalism, but rather Donald Trump’s abdication of it. Such reasoning allows them to lay blame for America’s current travails squarely at the feet of the Trump administration, without much reflection on the broad failures of the last three decades.

Blinken and Sullivan are, unsurprisingly, loathe to admit real failure or accept serious criticism of their records. In a review essay for Foreign Affairs, Sullivan takes aim at the realist scholars Stephen Walt and John Mearsheimer for their critiques of the foreign policy establishment, dismissing their books on the grounds that both authors lack real policymaking experience. “Walt has not spent time working in the Pentagon or the State Department or the Situation Room,” Sullivan writes, explaining that both authors fail “to distinguish between clear mistakes—such as the war in Iraq—and flawed outcomes flowing from imperfect options, which are the norm in a messy business like foreign policy.”

Blinken takes this rhetoric even further. In a Washington Post op-ed with neoconservative Robert Kagan, he predictably invokes the specters of fascism and communism to denounce those who call for a less expansive foreign policy. Any U.S. retrenchment, he and Kagan argue, would threaten to plunge the international order back into the abyss of the 1930s. Implicit in this worldview is the notion that the United States must involve itself in every international dispute and resolve every conflict, no matter how peripheral to American interests. Blinken and Kagan, in other words, are offering a prescription for constant intervention, which is why it is difficult to escape the impression that a Biden administration might constitute a restoration of neoconservatism in liberal hawk garb.

The Biden campaign’s vow to restore American leadership is emblematic of a Washington establishment still in the grip of nostalgia—nostalgia for a fabled “American Century” when U.S. hegemony seemed absolute and its benevolence without bound. It is precisely this expansive view of U.S. power that feeds a constant impulse for overreach and undermines attempts at restraint.

The Biden team’s own statements on Afghanistan and the Middle East underscore this dynamic. The former vice president promises that he will “end the forever wars” by bringing the “vast majority” of U.S. troops home from the Middle East—meaning U.S. forces will still remain in the region. Blinken has made similar statements, highlighting the difference between “large-scale, open-ended deployments” and “small-scale, sustainable operations.” America’s war on terror will continue indefinitely, with no clear benchmark for success—a forever war. Instead of charting a new course, a Biden administration might well be in thrall to the dogmas of the past.

Jordan Henry is a staff associate at the Center for the National Interest.